While the protocol has succeeded in lowering consumption of CFCs, developing countries still bear the cost burden of using and developing substitutes 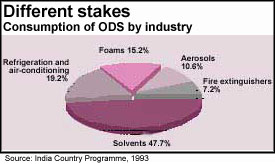 the Montreal Protocol is now hailed as an "extraordinary environmental success"and has come to be regarded as a "model-setting, green, global agreement". A recent study commissioned by Environment Canada which was tabled at mop -9 concludes that the health and financial benefits of the protocol far outweigh its costs. It estimates that the economic benefits of the agreement, signed by 163 countries, would amount to us $330 billion by 2060.

The 1990 amendments to the protocol established the Multilateral Fund to assist developing countries in reducing and ultimately eliminating use of ods . This was pivotal in securing ratification by the developing nations. Since its establishment, the Multilateral Fund has allocated us $570 million for projects in over 100 countries. China is the largest recipient, and India the second largest -- having received approximately us $ 40 million, according to the us general accounting office's testimony to the sub-committee on health and environment (reported by Friends of the Earth, Canada). This investment was supposed to phase out about 84,000 odp -weighted mt of ods , or about 40 per cent of the estimated consumption in Article 5 countries. But it was reported that, as of December 31, 1996 only 20,487 odp -weighted mt has actually been phased out. This delay is attributed to time lags between project approvals and start-up and project completion time.

But the amount sanctioned by the Multilateral Fund is insufficient. According to estimates, India alone would require around us $1 billion for conversion projects. And if one determines who is paying for this phase-out, the protocol again leaves a lot to be desired. It strengthens a global governance system where the rich and poor of the world are being asked to share the cost, and the responsibility, for setting right a global environmental problem caused by the rich. The bottomline remains that -- its legal precedents notwithstanding -- the Montreal Protocol is a weak treaty.


The proposal made at the Nairobi meet (also put up at mop-9) to allow use of ods as feedstock in developed countries, besides being iniquitous, raises the spectre of continued emissions in Article 5 countries. The definition of process agents by the Technology and Economic Assessment Panel (teap) was wide in legal as well as practical terms. The Indian, Swedish and the eu representatives at the meeting had raised doubts about this recommendation, suggesting that further consultations were needed.

The compromise reached in Nairobi was a two-year extension to treat process agents as fixed stock. The teap was asked to put in a report by 1999. The proposing countries conveniently intend to escape the burden of conversion projects (which will largely require technology imports from Japan) to phase out ctc and mcf -- two widely used solvents. They want to run their own ctc -emitting facilities by claiming that they are foolproof against leakages. But no such guarantees can be made in dealing with hazardous chemicals.

By seeking to treat ctc as feedstock, the proposing countries will effectively discourage conversion projects in developing countries and hold back on resource transfers. The chemical processing factories are concentrated in India and China. Industry in the two countries will stand to gain most from resource transfers for conversion technology. Several projects for ctc alternatives have been identified in India with the help of Japan and the industry is keen on going ahead.

The protocol also sets a dangerous precedent by sanctioning and promoting the use of hfc s, especially hfc -134a, considered a 'safe' alternative to cfc s. Recent estimates indicate that the global hfc market could be around 1.35 million tonnes a year by 2040 -- equivalent to 15 per cent of current fossil fuel emissions. A study by Atlantic Consultants of the uk reveals that hfc -134a leakage from air-conditioners installed in automobiles sold in 1995 in Western Europe and Japan will generate the co 2 equivalent of five and 10 new power plants, respectively. Moreover, as the 1996 unep scientific assessment says, hfc -134a forms trifluoro-acetic acid -- a persistent toxin which cannot be metabolised by plants and animals.

Given these environmental concerns, hfc s should at least be referred to as 'transitional substances'. hfc s do not contribute to ozone depletion, and the protocol does not have a mandate to legally control them. But in encouraging their use it shares the responsibility for their ultimate impact on the environment.


The test of an agreement is not in its provisions alone. Equity aspects are equally important in engendering compliance and promoting global environmental democracy.

The fact is that the principal contributors to the growing hole in the ozone layer are rallying together to reduce their commitments to the Multilateral Fund. To justify the protocol, commentators and politicians in the West have argued that it is based on the 'polluter pays principle'. Nothing could be further from the truth. In this case, the 'polluter pays principle' would have fixed a liability on each party, reflecting a nation's responsibility in damaging the atmosphere and making transfer of funds and technology mandatory.

Scientists say that even if all countries implement the protocol, the ozone layer will not attain its pre-1970 level before 2050. Global warming and ozone layer depletion are not historical accidents but the net effect of unsustainable consumption of the world's resources and interference with the planet's ecology by developed nations. The threat can only be met through cooperation and an equitable management system, wherein the North accepts structural adjustments in its economy to help the world get back into shape.