The roots of prosperity

The roots of prosperity 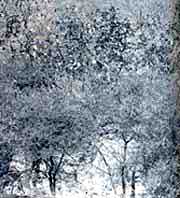 PEOPLE's efforts to protect forests in the villages of Gujarat are recent compared to those in the Bihar-Orissa belt and started only after the forest cover had become non-existent. Villages had become surrounded by dry, barren ground. The trees had been reduced to mere root-stock. With an uncorporative forest department is less supportive. Here, the passage was, and still is, much tougher. Villages are waking up to the need to regenerate forests. Those who have woken up are struggling to make the approriate institutional support structures.

For the villagers of Asundariya in the Lunavada circle of Panchmahal district of Gujarat, it was literaly the last straw: a decade ago, they were not left with even so much wood as to keep their cooking fires burning. This forced them to initiate an entire process of regenerating and protecting their local forests. Today, Asundariya is self -sufficient in it's fuel needs. The local forest, streching beyond Asundariya's fields of wheat and maize, are green woth teak and smaller shrubs.
The Panchmahal district has a predominantly tribal population, most of whom are marginal farmers. The undulating landscape dotted with small, barren hillocks has fields of wheat and jowar. Perpetual water scarcity curtails cultivation in the summer. Each village is made up of hamlets spread out in these fields. Till the 1940s, the district had a dense forest cover. This was slowly lost as the Forest department took over the forests and regulated its use. "This spelt disaster, since the people no longer felt responsible for the forests," says Harnath Jagawat, of the Sadguru Water and Development Foundation, an NGO operating in the district.

The situation had reached its nadir about a decadeago , when there were no wooded areas left. The entire forest cover was cut away for wood and fodder by the villagers. "We couldn't make implements for farming, nor repair our houses," said Somabhai of Asundariya, one of the first villages to initiate regeneration,"We realised that we had reached a dead end. Our women were walking for miles to collect firewood to cook." So, 7 years ago the entire village met and decided to regenerate the lost forests from the root stock and protect it fiercely.

This move was not confined to Asundariya. During the last decade, many other villages in the region also started regenerating and protecting their forests. Now the protected forests show up from afar as young trees against the hard, brown hillocks.

The inspiration for this regeneration came from 2 villages, Vena and Veni, that were the sources of wood and fodder during crises. Situated in the remote interior hills, the dense forests around these villages were overused by neighbouring villages, forcing the people of Vena and Veni, to prohibit its use by outsiders. "This triggered off similar efforts in other villages, who started protecting their own surrounding forests," says Manojbhai, another resident of Asundariya.

Giriraj Sinh, director of Social Action for Rural and Tribal In-Habitants of India (SARTHI), a local NGO which has been documenting the entir process."No forest department, no NGO,absolutely no outside interference has motivated the villagers' forest protection efforts." SARTHI documenting the work in 70 villages which have initiated this process but Sinh feels that there may be many more such villages in the area.

Community participation and support formed the foundation of the whole process. Each village constituted a protection committee, chosing accepted leaders, many of whom were women. It then demarcated for itself a portion of the surrounding barren forest department land and made a boundary around it. For the first few years, it was not used at all. To ensure that there was no violation of the forest, the villagers either kept a watch over the forests close to their homes, or employed a watchman, like Hamirbhai Laljibhai, of Asundariya. Says Laljibhai, "My duty is to patrol the village's forests and I get paid 10 kilograms of grain per family every year," he said. "There is no trouble these days," he asserts," every one now realises that the protection of these is the key to survival.".

Earlier, when protection was still catching on, villagers would protect their own forests but deprade their neighbours. "In the case of Asundariya, the watchman would collect all of us and we would chase out the intruders," says Somabhai. But even this has stopped now, as the value of protecting the forests becomes clear to other villages. "The people are protecting the forests because they now regard them as their own, and see this as the only solution to the mess" says Champak Singh, of Vankri village.

Villages have evolved management methods similar to each other, with local variations. These methods are conditioned by the fact that the regeneration is for use rather than sale. Villagers are free to go into the forest and pick up dead branches and twigs from the forest floor for fuel but they cannot take implements like axes and scythes with them. This is allowed on a few days, predecided by consensus. Even on those days, after Holi (in March) in some villagesand after Diwali (in November) the villagers access to the forest is controlled.

Manojbhai, of Asundariya's committee, explains, "We decided collectively to allow a maximum of five members from each household to enter he forest and collect as much wood as they can on their heads within that day." Cutting is allowed only for firewood and timber for housing, but the kinds of trees to be cut are restricted. And under no circumstances is cutting for commercial purposes is taboo.

In some villages the quantity is restricted according to the size of the family. "But even this does not create tension within the village, as every thing is decided openly in front of the entire population," says Shardabehn of Vaneda village.

The members village protection committee and the watchman remain present to prevent disputes arising from families taking more than their fair share. The wood collected lasts each household upto 4 months. "For the rest of the time, we use cowdung cakes, or agricultural waste,"said Ambabehn of Vankri. "Of course, now we can pick up leaves and twigs from the forest floor as well," she adds.


The women of these villages have been in the front in this effort to regenerate the forests, since they were the ones to suffer the most. Says Shardabehn of village Vaneda, " Earlier we had to go upto 10 kilometres everytime we needed firewood.

Veneda's Jaltibehn, emphasises that the restriction of the use of the forests didn't increase their hardship. " We don't protect our forests to gain money from them. We only want our forests, and use them judiciously." And since the emphasis is on use, there is no blanket prohibition of access to the forests. "The situation has improved a lot over the years,"says Arjanbhai, "and as the forests become denser, the benefits will increase."

Disputes are settled within the village community. The protection committees, consisting of village elders and leaders, have regular meetings. In village Vaneda, for example, there is an annual general body meeting where the day of unrestricted wood collection and the amount of wood to be collected is decided by popular consensus.

An interesting facet is the system of fines for violation of the rules of using the forests. If a villager cuts wood illegally, then he or she is fined the value of the wood in terms of money, and the challan is cut by a representative of the Forest department. "The problem is that the village protection committees have no legal identity, so they don't have the authority to fine offenders and keep the money," explains Manojbhai.

There are other problems that the nascent protection committees are facing. Even though the villages themselves have successfully regenerated their forests, the status of these forests is ambiguous. The forest department is officially in charge but the villagers regard them as their own, since they have put in the hard work to carry out the protection.

To their chagrin, the forest department, although generally pleased with the development, wants to include these forests into the its Joint Forest Management (JFM) programme. P C Thakur, range clerk of the Lunavada forest range, and promises to "give the villagers their due"

But this payback is precisely what the villagers don't want. The generated forests are for use and not for sale. Madhu Sarin, the Chandigarh based social activist and forestry expert, who has been studying such initiatives in other places apart from Panchmahal district, is of the opinion that these villages should be left to themselves to develop at their own pace. "All this talk of JFM not only pressurises them, but also scares them that the Forest department will take over their forests," she says. Sinh feels that the way out of this impass is to give the village protection committees official recognition

While the Forest department takes its time to decide its course of action, the regeneration programme is spreading to other villages in the district. As Shardaben put it: "We want the wood,we want more rain, so we should be left to protect our own forests." And it is this feeling of belonging thatensures the successful regeneration of Panchmahal district's forests.