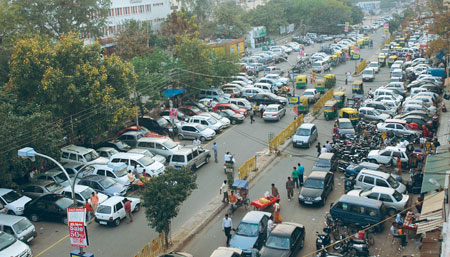 Indian cities need to put the brakes. But how? "Think of what London and Singapore did before graduating to sophisticated restraints," said Paul Barter of Singapore National University. Singapore slapped high taxes on new cars and annual taxes on cars in use. It could be 160 per cent of the market value of the car.

London limited the parking supply in Central London and allowed market forces to decide the parking price. This made travel to city centre expensive. These approaches along with the public transport expansion made a difference.

Parking restraints top the list as the car restraint measure globally. This is also seen as a precursor to area charging— pay higher parking in targeted areas (see also: Parking brakes). But parking charges are the lowest in India and are a hidden subsidy for the car owners. Seoul, Taipei, Tokyo and Hong Kong have the highest parking charges.

"The effect of parking restraints is most dramatic in Hong Kong and Tokyo. They have clubbed limited parking supply with high parking rates," said Barter. Tokyo has 350 cars per 1,000 people—one of the highest car ownerships in Asia. But it provides less than 0.5 parking slots per 100 sq metre in commercial buildings—less than Delhi. Hong Kong too provides about 0.5 per 100 sq metres. In Hong Kong residential parking can cost US $300 per month (

13,850). But Indian cities continue to focus on parking requirements.

Delhi is developing its parking policy and needs to integrate the restraint principles. "Non-availability of parking is one of the strongest determinants for use of public transport," said Dinesh Mohan of IIT Delhi.

Are Delhi and other Indian cities ready for congestion pricing?

The Parliamentary Standing Committee on urban development in its report of 2009-10 proposed "congestion tax on personal vehicles in the congested areas or roads". But the government turned this down, saying, "In Indian context levying of congestion tax may be pre-mature in view of the quantity and quality of public transport." 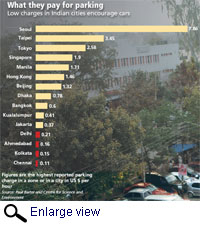 P K Sarkar of School of Planning and Architecture in Delhi evaluated congestion charging in Connaught Place in central Delhi and corridor pricing on the stretch between Kalindi Kunj and Mathura Road in Delhi. "Nearly 70 per cent of the traffic in Connaught Place cuts through the stretch. This can be diverted and curtailed with congestion pricing. Targeted corridor pricing can be effective as first step and this can also generate revenue," said Sarkar. Vehicle restrictions can improve conditions for walking, cycling and public transit.

But there are doubts. A radial city like Delhi may not have a well pronounced congested central business district. Its viability may be affected if commercial areas are allowed in the periphery of the cities. There can be spillover in other areas.

While looking at the variety of restraint strategies, cities also need to look at the big picture. "Congestion charging is successful in very small areas of a city—only in a central business district, which is not going to shift," said Mohan. "To contain the low share of car trips in our cities, first expand the mobility options of the majority—walking and cycling, safe from accidents and street crime—who also cannot afford public transport. Improve their access." (Read More: Road Transport Research by IIT)

Manfred Breithaupt of GTZ agreed, "Asian cities must concentrate on better public transport and non-motorised transport measures to provide viable alternatives to the car. Ensure that once congestion pricing is implemented motorists will not blame the government for not providing alternatives."

However, making cars pay the full cost of their damage and for hurting the interest of those in buses, on feet and on pedal, is also a concern in Indian and Asian cities.

Lee Schipper, transport expert from University of California, Berkeley, who has been examining the Asian issues, said, "Just putting money for green transport or chasing the carbon fund without strong measures to discourage woefully underpriced car use will not deliver."

Indian cities are beginning to eye revenue from car tax reforms and congestion- related fiscal measures to meet the growing cost of public transport and non-motorised infrastructure. Delhi's transport department has taken up the matter with the finance department. Who says congestion is bad? Congestion is good for cities. Only frustration and fume can make the fuming millions support the right price tag on cars to kick in the real change.