To flow or not to flow

To flow or not to flow

The debate how much is minimum

Run of the river dams involve diverting the river into a tunnel, ranging from 3 km to more than 15 km long. Since it will be a cascade of dams throughout the river, most of it will flow through either tunnels or small reservoirs. The place from where the river is diverted into a tunnel to the point where it is released back into its natural stream tends to have very little water, especially during the lean season, winters for instance (see box Enter the tunnel). The water is important to sustain the ecology and nearby groundwater aquifers. This has led to a debate on how much flow is needed to sustain these.

The Union Ministry of Environment and Forests (moef) says there is no use of having a designated minimum flow for all rivers."It is different for different rivers and depends on how much flow is needed for ecological sustenance in that area. Earlier, the exact amount of flow needed was not mentioned in the environmental impact assessment (eia) reports but now we do give a specific figure in the clearance," said S Bhowmik, additional director, Impact Assessment, moef. In the clearance letters to the recent hydroelectric projects on the river basins, the ministry has said that the projects should maintain a minimum flow of 30 cusecs (<1 cumec)="" in="" the="" lean="" season.="" "no="" one="" knows="" the="" basis="" of="" this="" 30="" cusecs,"="" says="" ritwick="" dutta,="" the="" lawyer="" fighting="" cases="" against="" some="" of="" the="" hydroelectric="" projects="" in="">

Since eias require projects to maintain a minimum flow in the river at all times, they calculate it by tracing 30-40 years of old flow data of a river, provided by the Central Water Commission. But the eias in the case of most projects show that they have not taken any of these concerns seriously. Only two projects' eias--Alaknanda and Pala Maneri--say that 10 per cent of the lean season flow and 2 m3 /second should be released respectively. For Alaknanda though, the minimum flow has not been mentioned. In the case of Pala Maneri, it works out to just 6.7 per cent of lean season flow. 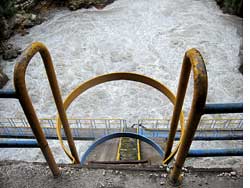 Himachal Pradesh is the only state to have come out with a notification on minimum flow. The state government said that a minimum flow of 15 per cent of the lean season should be maintained by hydroelectric projects. "Diversion of huge quantities of water (from the Sutlej and Chenab rivers) by hydel projects has minimized water flow or even dried up the main river bed...which consequently is not only damaging the water course but also causing irrigation problems, health hazards and waterborne diseases. Decreased volume of water is a cause of pollution of water streams," the notification states. The National Hydroelectric Power Corporation Ltd (nhpc) challenged this notification in the Himachal Pradesh High Court. "We challenged the notification because it is not possible for us to maintain the criterion in projects that are already operational. They have not been designed like that. So, the high court stayed the notification for the existing projects," Usha Bhat, chief of environment department at nhpc, said. The court has constituted an expert committee to look into how much minimum flow is needed for the upcoming projects, she added.

Criticizing the move, Vidhya Soundarajan, senior coordinator, Policy and Programme Development, wwf, said "10-15 per cent flow of the lean season is a trickle. India has just picked up figures from rivers like Mississippi and Amazon that are usually flooded." Calling minimum flow a "dubious term", Soundarajan adds, "Minimum flow is calculated from the point of view of human needs. What we need to deliberate on is the environmental flow which takes into account the groundwater recharge potential of the river, irrigation, urban needs, ecology, dissolved oxygen and silt load factor."

For example, otters, an endangered species, and mahaseer are found in the area where the Kotli Bhel I b project (near Devprayag, the meeting point of the Alaknanda and Bhagirathi) is proposed. "A mahaseer needs a fast flowing river for laying eggs while the habitat of otter is in the riparian groves near the Alaknanda river. If the dam comes up, their population will suffer due to very little change in the water levels," Dutta said. The National Environment Appellate Authority (neaa), which has heard cases against Pala Maneri and Loharinag Pala projects, is currently hearing the Kotli Bhel I b petition. " neaa did cite the need for a cumulative assessment of all dams and their impact on the flow in case of Pala Maneri. In Loharinag Pala, the authority directed the moef to monitor the environment and ecology of the area," Dutta added. The ambitious Kotli Bhel eia proposes to catch otters from their natural habitat between Dev Prayag and Srinagar and resettle them in the area between Kirti Nagar and Srinagar, which will be declared a Protected Area. There are dime-a-dozen errors in the eias done for the projects.


The first sentence in the chapter on prediction of impacts in the eia of Vishnugad Pipalkoti Hydroelectric Project in the Alaknanda basin reads "Based on project details and the baseline environmental status, potential impacts as a result of the construction and operation of the proposed Teesta- iii hep have been identified." Teesta iii is a project in Sikkim, the eia of which was done by Water and Power Consultancy Services Limited (wapcos), the company that has also done the eia for Vishnugad Pipalkoti project. Numerous such examples exist.

Another problem with the eias is dated data. The eia for Pala Maneri, prepared in 2005, used data from the project report of 1986 which says that the average minimum (non-monsoon) discharge of the river at the dam site is 30.87 cumecs. Currently, at the Loharinag Pala site, the project above Pala Maneri, the average minimum discharge in the river is about 18 cumecs, according to ntpc. The eia of Pala Maneri mentions names of villagers who participated in the public hearing. "Of those, two people were already dead. This shows how credible the hearing was," said R Sreedhar of Environics Trust, New Delhi (see box Behind closed door).

The eia of Srinagar has taken the flow data from 1971 to 1994, which gives only the average flow over those 23 years. The three Kotli Bhel eias and the Srinagar eia have not quoted the source of this flow data while that of Loharinag Pala says it is taken from the detailed project report. The Central Water Commission (cwc) refused to divulge the flow data saying the Ganga is a "sensitive river". 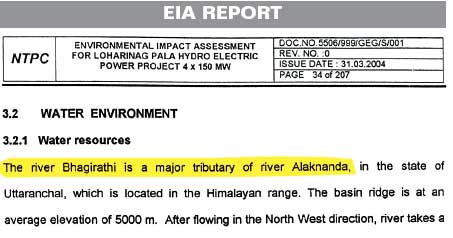 "There has certainly been a change in discharge of the river over the past few years. Even the silt content in the river has gone up due to deforestation," said A K Bajaj, chairperson of cwc.

According to Ishwarchand, assistant engineer of Maneri Bhali II, the silt load at the barrage site there is 90 million tonnes per annum. There is no estimation of the silt in the Ganga downstream of Tehri. "Tackling silt takes up to 20-30 per cent of the project cost. Projects now use the latest technology to tackle silt," said Bajaj. But eias are silent on the silt problem. "Increase in silt is also due to constructions upstream," a guard there said. "This indicates that none of the dams can work properly till all construction is over," said R S Jamwal, who runs a school in Uttarkashi. Parts of generation units underwater in Maneri Bhai I have been damaged because of silt.

The section on fish management in the eias of Tapovan Vishnuagad, Lata Tapovan and Vishnugad Pipalkoti, all done by wapcos, reads the same. The Kotli Bhel eias have an identical statement "Operation Phase Improved habitat for birds, reptiles, mammals, amphibians and plankton due to reservoir creation." Claiming that "nothing could be further from the truth", scientists of Environmental Law Alliance Worldwide (elaw), usa, who conducted an evaluation of these eias, said, "The kind of habitat surrounding a reservoir, in terms of types of vegetation and biological diversity, is vastly diminished and altered compared to the types of riparian vegetation and diversity that surround free-flowing river segments. The Loharinag Pala eia mentions that the total forestland that will come under the project will be 60 hectares (ha). According to the Uttarkashi Forest Division, it is 139 ha. "Most eias have picked up secondary data. No direct study, just a copy and paste job. In effect, there has been no impact assessment," said Sreedhar.

There are several more reasons to be concerned about the feasibility of run of the river projects, say experts, for the eias have completely ignored some important aspects such as laying of transmission lines, flashflood possibilities and glacial melt (see box Climate uncertainties). Heat generated by high-voltage power transmission lines is enough to destroy agriculture in the areas from where they pass and cause extensive loss of forests and habitat fragmentation. Flash floods caused because of landslides could be a major problem. The 1978 flash flood of Kanodiya Gad, upstream of which the Loharinag Pala is coming up, serves as an instance. The gad (stream) was blocked by a huge rock that fell from the mountain. When the water pressure built up, the rock moved towards Bhagirathi and created a huge lake there.


Silt, crucial for farmers downstream, getting trapped in these dams will adversely impact downstream areas, mainly the Indo-Gangetic plains. "Gangetic rivers erode bulk of the sediments from upstream areas in the Himalayas and deposit part of it in the alluvial plains and a significant part in the Bay of Bengal," Jhunjhunwala quotes a study.

The eia of hydropower projects ignore this impact on downstream areas. The eia of Srinagar hydroelectric project says "The annual silt load in the dam is 7.62 mm3 and in due course of time (9.184 years) the dead storage will be silted up. However, as the spillway gates will be frequently operated, the accumulated silt behind the gates will be flushed out." Jhunjhunwala argues that the silting up of the dead storage implies that downstream areas will be deprived of this huge amount of sediment. "Flushing will only remove silt behind the gates, leaving silt in the larger dead storage trapped perpetually," he added.

According to the elaw report, trapping of silt would make the Ganga a "hungry river" in the downstream. "As the dams will dramatically decrease sediment supply in the water, they will behave as "hungry waters" scouring sediment from the riverbeds and river banks downstream of the dams to restore the natural sediment levels of this water. Fisheries several kilometers downstream will be adversely affected because of impairment to the biological food chain that is fortified by the muddy sediment layer."