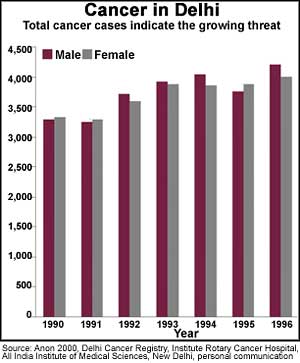 T he six cancer registries in India fail to give the true picture of cancer incidence as several cases go unreported. Vinod Raina, additional professor of medical oncology at aiims , recently stated in a television programme that only about 30 per cent of the patients diagnosed with cancer undergo treatment because of the cost and many drop out halfway, having run out of money. Yet, whatever indicators are available do not present an encouraging picture (see graph: Cancer in Delhi ).

Randip Guleria, assistant professor of pulmonary medicine at aiims who participates in a weekly lung cancer clinic, says, "My impression is that there has been an abnormal increase in certain cancers in Delhi, and cancers of blood and lung are two of these. And the problem is only growing, because cancer takes a lot of time to develop, a lot of exposure to toxins. The pollution that we cause today comes back as cancer 10-20 years hence."

Data projections by the National Cancer Registry Programme of the Indian Council of Medical research show that cancer of the cervix would be the most common cancer in India by July 2001, accounting for more than 12 per cent of all cases. In Delhi, lung cancer is the commonest among men. Blood cancers are also a greater problem in the capital as compared to the other registries. A comparison of blood cancer rates in the late 1980s shows Delhi records the highest rate of occurrence of blood cancers among the six registries in India (see graph: Blood cancers: Delhi's bane ).

What are the reasons for these alarming trends? The causes of cancer are too diverse -- from lifestyle to genetic makeup. Several physicians say better health awareness among the masses is responsible for a greater number of cases being reported, and that rise is proportionate to the increasing population. But this does not explain the entire picture. For example, while cancer is an ageing-related disease, how can childhood cancers be explained? In the us , for example, cancer is the leading cause of disease-related death among children and childhood cancer rates are increasing at 10 per cent every year, according to a 1998 report entitled 'Childhood cancer: a growing problem', published in the Environmental Health Perspectives . Improved diagnostics and better recording of cases are assumed to play a role in this, but "even taken together they cannot explain the magnitude of increases that have been observed," says Sheila Hoar Zahm, deputy chief of occupational epidemiology at the us National Cancer Institute.

In recent times, a lot of scientific support has come in for the view that cancer has more to do with environmental conditions than anything else, including genetic makeup (see 'Genes, dreams and reality', Down To Earth , Vol 9, No 6; August 15, 2000). " iarc reported a few years ago that more than 80-90 per cent of all cancers are related to the environment. Hence, there is no question that with the increase in pollution burden in our environment there will be an increase in the incidence of cancer," says P K Ray, immunotoxicologist and director of the Bose Institute of Calcutta. "Benzene is bad for health and is known to cause certain cancers like those of the bladder and blood. It is toxic to bone marrow and the urinary bladder," says Raina. Benzene is an established human carcinogen, and its levels are amazingly high in the ambient air of cities like Delhi (see graph: Delhi's shockingly high... ). H B Mathur, professor emeritus at the Delhi College of Engineering, and expert on engine technology and a fellow at the Centre for Science and Environment, says when Delhi started using unleaded petrol, nobody gave a thought to the number of vehicles that do not have catalytic converters. "Today, over 90 per cent of the capital's vehicle fleet has no catalytic converter. This causes major emissions of benzene from the exhaust pipes," he says.