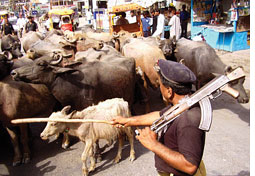 High inflation and the absence of certified feed mills in Pakistan's Sindh province is forcing dairy farmers to use stale bread-- bhosi tukra --in cattle feed. This practice has already caused a catastrophe, when 493 animals died in Karachi's Landhi Cattle Colony in November last year. More than 1,200 animals fell sick.

"A report released by the Pakistan Council of Scientific and Industrial Research (pcsir) has concluded that deaths were caused by a high concentration of aflatoxin in cattle feed," says Hafeez Shaikh, a vet at the Landhi Cattle Colony. "According to the us Food and Drug Administ-ration the concentration of this naturally occurring toxin in cattle and poultry feed should not exceed 20 microgramme per kg. But the pcsir report showed the aflatoxin concentration was as high as 200 microgramme per kg in the Landhi Colony samples," Shaikh adds.

Samples of dead flesh were sent to the Central Veterinary Diagnostic Laboratory, Tandojam, Sindh, but no bacteria or virus was found. Experts such as Shaikh have an explanation for the toxicity caused by stale bread: "Usually, cattle feed comprises cotton seedcake, wheat bran, wheat crush, pulses, wheat straw and green fodder. But these days, farmers have to mix this with stale bread collected from houses. The bread is often stored for long in godowns, where they become toxic."

Landhi Cattle Colony has about 400,000 animals and supplies 50 per cent of Karachi's milk requirement. The 16-million megapolis has other cattle colonies and the interior of Sindh supplies a substantial portion of milk to the city. But as Shaikh points out, "The demand can't be met without the 1.6 million litres supplied from Landhi Cattle Colony every day."

The cattle colony was established in 1958 over 300 hectares when the area was almost uninhabited. But it has become very congested since then. This can be gauged from the fact that a farm with a capacity to house 90 buffaloes and cows is crowded by 400 animals on average. "We have been lucky that there has been no major outbreak of a contagious disease. But overcrowding does pose a threat," says Shaikh.

He says it is time the government established a laboratory in the area for timely detection of toxins in cattle feed besides establishing certified feed mills across Sindh province.

Media reports suggest that more than 2,000 mature animals of productive age and about 500 calves are slaughtered daily at the Landhi Cattle Colony. A large number of animals are sold to slaughterhouses the moment they stop lactating since their owners find it difficult to feed them during the dry period. Many calves are also sold. Buffaloes remain productive till 10, but many are sold after they are three years old. The practice will result in extinction of high quality animals such as the Red Sindhi cow, Kundi and Nili Ravi buffaloes and the famous Sahiwal cow, say experts.

The average daily production of milk in Pakistan is about 130 million litres, but hardly 2 per cent of the milk sold in the country is pasteurized. Seventeen units, including three run by multinationals, manufacture dairy products, but environmental pollution as well as an inadequate supply chain are hampering the growth of Pakistan's dairy industry. "Cattle colonies and dairy farms should be established on scientific lines," Shaikh says.