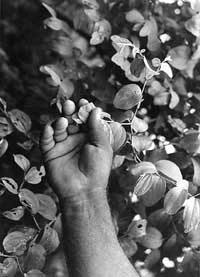 IN SAURASHTRA region of Gujarat, most farmers grow one crop per year. Around Junagadh district in the southern part of the state, peanut and castor are the main cash crops. Peanut gives the best returns, but will only thrive with a heavy monsoon. If the rains are weak, the more drought-tolerant castor is a better hedge. In April and May, the months before the monsoon, farmers must decide what to plant, buy seed, prepare the soil and sow. And wait.

The uncertainty of the coming monsoon - both the date on which it will come, and the amount of rain it will bring - makes summer a season of anxiety for farmers all over India. While the 20th century spread of canals and deepwell irrigation has reduced dependence on the rains somewhat, the monsoon rains remain critical. These farming realities have changed little for centuries. To help reduce the uncertainty of the monsoon, farmers have developed a variety of traditional methods for predicting the nature of the monsoon. "Farmers have to reduce their uncertainty, their risk, using whatever indicators they have available," says Anil Gupta, an expert on indigenous knowledge systems at the Indian Institute of Management (IIM) in Ahmedabad. "Over centuries," Gupta continues, "they've developed ritual belief systems.

Some are not really scientifically based - some are obviously games - non- scientific efforts to reduce psychological uncertainty. But there are others that definitely are based on science, on physical observations - the behavior of birds, the flowering times of trees, wind and cloud patterns, and so on."

Over the past decade, a group of professors at the Gujarat Agricultural University (GUA) in Junagadh has been slowly collecting and systematising local rural weather expertise. In addition to documenting and preserving traditional knowledge, they aim to provide local farmers with a useful monsoon forecast. P R Kanani, an assistant professor with GUA, describes how he happened on this course of research: "In university, I wanted to work on something that would be useful to the local farmers. So I started collecting literature on traditional weather prediction. These were very old texts, very hard to find, some in Gujarati, some in Sanskrit, some only available in religious places...and they were not well-recorded." Kanani's most fruitful find was a book on Bhadli, an illiterate savant of uncertain gender from the 10th or 11th century. "Bhadli sang many songs about the weather," says Kanani, "and these have been passed down, in verse. Farmers all over North and West India, but especially in Gujarat, still know the Bhadli couplets." The late-coming monsoon of 1990 made Kanani a believer in the Bhadli couplets. "In 1990, the monsoon was delayed. The director of meteorology had predicted 'normal monsoon.' But that was not the case in Saurashtra," he says. By July, the monsoon still had not come. Two of Kanani's friends, local weather experts, reminded him of one of Bhadli's sayings: 'If there is rain accompanied by lightening and roaring of clouds on the second day of Jayastha (Hindu month beginning latter half of May), ... there will be no rain for the next seventy-two days.' "That year," says Kanani, "the second day of Jayastha came on 4 June. Seventy-two days later was 15 August. And that was when the rains came."

But that one data point could very well have been coincidence. So Kanani set out to collect more data to test the traditional methods of monsoon prediction. It hasn't been easy, as information on the traditional techniques is scattered, sometimes contradictory, and frequently vague. Many of the predictions, such as the one about the storm on the second day of Jayastha, refer only to a very infrequent event: there hasn't been a storm on the second day of Jayastha since 1990, so Kanani hasn't gotten a chance to see a repeat of the 72-day drought. Then again, the converse of that Bhadli saying has held true: no storm on the second day of Jayastha, no 72-day drought. Since 1996, Kanani has been collecting data on the blooming time of the Indian laburnum (Cassia fistula) tree, common on roadsides in Saurashtra. Cassia fistula's relation to the monsoon was documented as early at the 8th century in the Brahad Samhita by the philosopher Varahmihar. The monsoon is thought to begin 45 days after the tree's flowering peak. "We collect data from the trees all over campus. There's a distribution of flowering dates - we try to get an average value for the trees," says Kanani.

On Natubhai Makadia's farm ten kilometres south of Junagarh, Manish Patel and Situ walk the fields, pointing out some of the other plants that local farmers use for monsoon prediction. "This is the bear plant," says Situ. "It starts its growth in the summer season, before the monsoon. Strong growth means lots of rain in the monsoon. If it's stunted, that means less rain," he adds. Patel points to another plant: "This is keshuda or flame of the forest (Butea monosperma). It also starts to bloom during the summer. If it blooms early, that indicates early monsoon; late flowering means late monsoon. The character of the blooming is also important. If it blooms densely, that means the next monsoon will be good. So with this plant, farmers are predicting two different variables - the date and the quality of the rain."

"This year the flowering was slightly earlier than usual and the blooms were tremendous. So we started preparing the soil early, and we planted more peanut, to take advantage of the heavy rains," says Situ. We continue along a row of mango trees growing in a field of cotton. The titodi bird or redwattled lapwing (Vanellus indicus) is another important factor for weather forecasting. According to Patel, "As farmers start to prepare the land for the next monsoon, they will find the nests of the titodi and they will look at the position of eggs. If the eggs are in upward direction, it means good monsoon," Situ explains. "It depends on the number of eggs. Say there are four eggs in the nest, and all four eggs are in the upward direction - that means four months of monsoon in the next season. If, out of four, only three eggs are in upward position and one of the eggs is in horizontal position it means three months of monsoon," he adds.

"The titodi and these various plant species are very common on the borders of farms," Patel says. "They are close to farmers' daily life. After years of experience, they have observed - 'last year was very good and I have seen these plants in good condition and this bird behaving this way.' So they arrive at correlations between good years and different types of plant growth. This type of knowledge is not written anywhere - it is only in heritage," he adds.

"Over the centuries, farmers have obviously put a great deal of thought into this," says Gupta, adding that "and why would we expect anything different? A farmer's entire life depends on the weather!" With heavily instrumented modern meteorology at work, one might wonder whether the knowledge that a farmer like Situ has is still relevant. It's a brand of knowledge that tends not to mesh well with science and its notions of data, repeatability, and statistical significance. Apart from the work being done by Kanani and his colleagues, little effort has been made to systematise the traditional methods. Not surprisingly, the traditional methods have been dismissed by scientific meteorology.

"Traditional methods - those are OK as a hobby," says D D Sahu, a professor of meteorology at Gujarat Agricultural University and a researcher with the national director general of meteorology. "But we cannot completely rely on these traditions. These methods are age-old - they may not be applicable to this modern age."

But Sahu acknowledges that science hasn't come up with a useful alternative to the traditional methods for long-range monsoon forecasting - which is of greatest importance to the farmer. "We measure sixteen different weather parameters - pressure in the upper atmosphere, humidity, wind direction, and so on," says Sahu. "Based on this data, we give forecasts for seven to ten days in advance. Anything beyond that is 'long range,' and that is done only for the monsoon, and only once per year, on 25 May." But, Sahu concedes that official monsoon prediction - given for the nation as a whole and not individual regions - has been practically worthless.

Meanwhile, Kanani continues his relentless pursuit of more data on traditional meteorology. One project that he has coordinated since 1994 is the testing of one of the most widely-known Bhadli statements, regarding the direction of the wind on the day of Holi, a Hindu festival in March. The wind direction measured at specified times on Holi is supposed to indicate the strength of the monsoon that year (see Figure). Each year before Holi, Kanani mails out postcards to over 400 farmers in Junagadh and neighbouring districts. The farmers note the wind direction at the specified times, and send the postcards back.

Kanani has also started a non- governmental organisation (NGO) called the Varsha Vigyan Mandal (Rain Science Association). The group now boasts 500 members. "As we are showing that the predictions are accurate, we are gaining more and more support. We know that the work is important to the farmers. We are hoping that in the future it will be more known and more accepted by scientists too," says Kanani.