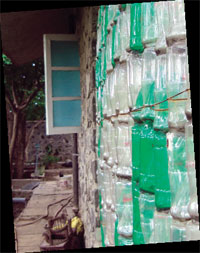 Once Saurabh Phadke was ready with the blueprint for Aman Setu school’s building, the next task was to gather loads of Pune’s gar - bage at the site and place orders with junk dealers. Using waste halved the cost of construction. The school at Wagholi, 13 km from the Pune railway station, was ready in May this year. As one enters the school complex, it is difficult to miss a bright green and white wall. It is made of old plastic bottles cut into halves and welded on top of each other with the help of candle flame. Bottles filled with mud form the base of the wall. A little farther is an open classroom called Kaleidoscope. It is built of bamboo and mud, said the 24-year-old architect. Moist mud from a nearby area and other organic waste were stuffed into discarded cement bags from construction sites. The bags were then rammed on top of each other and held together with barbed wire bought for Rs 2 per feet from a kabadi shop. “Just like one places layers of brickcement- brick-cement, we placed mud bags-barbed wire-mud bags-barbed wire. Like a Velcro fastener, wires hold the bags together,” said Phadke. The walls were plastered with a mixture of papier mache, buttermilk, cottage cheese, human hair and egg white. The cottage cheese and egg, explained Phadke, acted as adhesives. Advertise - ment hoardings came handy to waterproof the roof. “The idea of making a school out of waste material was inspired by military bunkers constructed during World War I,” said the architect. A stone bungalow was already there, classrooms were ad ded around it. It cost Rs 2.2 lakh. Most of the money was spent on labour because building each classroom took 40 days. Students drew designs and sketches of new classrooms. They were encouraged to participate in the planning of the school, said Madhavi Kapoor, principal of Aman Setu run by a public charitable trust named after her. Students’ involvement is evident as they flit in and out of a Rocket, a Rabbit Hole or join Alice in Wonder land. These are the names of classrooms. Rocket is called so for its conical dome, and Rabbit Hole’s entrance door just three feet high. Alice in Wonderland is where story narration and other group activities take place. Chintamani is a special classroomcum- science lab. It is a discarded bus of the Pune municipal corporation the school bought for Rs 70,000. Students call it Chintoo. “By creating a school out of waste, we wanted to teach children that nothing is waste,” said the principal. Aman Setu is also conscious of its own waste; its toilet is called Conscientious Crapper. It is a modified dry toilet where urine and excreta are collected separately. 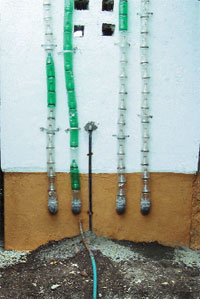 It uses a tenth of the water used in conventional toilets. Urine is directly used as fertilizer and the faecal matter is composted. Aman Setu’s approach of blending the natural with conventional is reflec - ted in its teaching style as well. The school has a farm and each child is allotted a section of it to grow vegetables organically. On Thursdays—called the “busy bawarchi” day in the school calendar— children learn to cook the food they grew. Every three weeks the students, teachers and the principal meet to discuss what was taught and learnt. “Ours is a living curriculum,” explained Kapoor. The school has 35 students in I to IV standards. They are called caterpillars. Another 20 “eggs” study in junior and senior kindergarten. Maths and science are taught through simple games and activities. The idea is, explained Shilpa Desai, head of the primary and pre-primary school at Aman Setu, children experience first and learn from it later. Ã”Ã»Ã¡