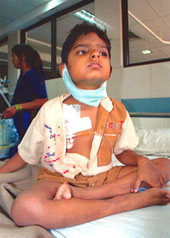 Paediatricians are worried about rising cancer rates among children. Like Anupam Sachdeva and A K Dutta, head of department of paediatrics at Lady Hardinge Medical College, New Delhi. They have been witness to a rise in the incidences of brain cancer and acute lymphocytic leukaemia, commonly found among children.

In fact, incidence rates of childhood cancer in India have risen in the past decade by about 14 per cent, according to the icmr's latest cancer registry. The greatest surge has been in leukaemia, says L S Arya of the All India Institute of Medical Sciences (aiims), New Delhi, who has worked extensively on such illnesses. Arya also says that parents are more aware today and seek early treatment, which may have also led to this upward trend in cancer registries in hospitals. Recent research attributes this to environmental causes.

A study in Cancer Research, a us-based journal, in 1991, found that baby rats were seven times more susceptible than older rats to a potent liver carcinogen. To make matters worse, infants and children have greater exposure to carcinogens than adults. For instance, chemicals like formaldehyde, exuded by new carpets, insecticides sprayed at home, herbicides in the lawn, even benches coated with wood preservatives linger longer at the ground level. Children crawling on the floor, playing on the lawns or tumbling in the grass with pets come in close contact with such chemicals.

High exposure to toxic compounds like pesticides (specially organophospates) have long been recognised to cause nerve damage (called the nerve gas syndrome). More recent animal studies have suggested that even low dose exposures can cause injury to the developing foetus, and can do so at exposure levels that do not cause clinical symptoms in the mother.

For example, on an average, children in the us by the age of six, would have accumulated about 35 per cent of their allowable lifetime cancer risk from captan -- a fungicide frequently used on apples, grapes, and peaches. Similarly, despite the partial ban on ddt, a toxic insecticide, India still has one of the highest concentration of ddt in breast milk in the world. ddt is known to cause severe nerve disorders in children.

Pesticides also cause biological changes in the body that enable cancer cells to multiply. They can change the body's genetic code by damaging the deoxyribonucleic acid (dna) structure. They can also seriously weaken the human immune system, making the individual more susceptible to the onslaught from cancer cells.

Exposure at an early age can increase an individual's risk of developing cancer over his or her lifetime. Experts believe that transformation of pre-cancerous cells into a malignancy generally takes years, even decades.

Chemicals in the environment can alter sex ratio dramatically. A study in Seveso, northern Italy -- the scene of a devastating explosion at a chemical factory in 1976 that released large quantities of dioxin into the atmosphere -- found that more girls than boys were born into families living in 12-kilometre radius. Says Shikha Reddy, researcher at uk-based Barkins Institute: "The real challenge is for infants. Breast fed infants are exposed to levels to dioxins that exceed adult exposure by as much as a factor of 50."


Today consumer products too are reported to contain toxic chemical compounds. Recently, New Scientist reported that shampoos containing traces of female hormones could lead to girls attaining early puberty. Certain shampoos, especially those marketed to blacks, were found to contain small amounts of hormones that could cause premature sexual development in girls. In every developed country, girls are reaching puberty earlier, a phenomenon that has been blamed variously on hormone pollutants in the environment. Chandra Tiwary, former head of paediatric endocrinology at Brooke Army Medical Centre in Texas, says that these hormones are probably absorbed into the bloodstream through the scalp and lead to premature puberty.

The report cites that "at least five us companies" made hormone-laced products, which appeared to fall into a regulatory "grey area". The products are on sale without the specific approvals required from the us Food and Drug Administration. Even in a less chemical-intensive country like Puerto Rico, researchers have found that eight in 1,000 children attained early puberty. Before they have outgrown dollhouses, many young girls are faced with confusing mood swings, hormonal changes and sexual attention that accompanies physical maturity.


Even innocuous consumer items like plastic toys and teddy bears can lead to impaired mental development and growth retardation in the child. Gone are the traditional red sandalwood dolls or medicinal teethers made of Vasambu wood. Many soft and chewable toys, chemical pacifiers, teethers and even baby bottles are made of recycled polyvinyl chloride (pvc). This material contains a group chemical called phthalates, which are confirmed growth retardants.

Manufacturers of toys in Mumbai, New Delhi and Chennai confirm that most toys are today made from virgin and recycled plastics. Toys made of pvc contain dangerous additives, which leak out and are ingested by children. In fact, the softest and most chewable toys could be the most poisonous and toxic.

Investigations carried out by the international pressure group, Greenpeace, found that 71 soft pvc toys, including five from India, contained high levels of phthalates.

Even adults are known to be susceptible to the effects of phthalates, especially pregnant women. It can result in immature babies, underweight neonates and depressed immune responses. The adverse effects of these chemicals on children takes many years to become apparent.