Urine is no waste

Urine is no waste 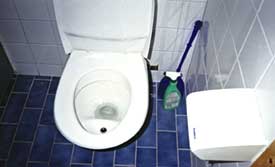 Here are some figures that might make puritans cringe in revulsion. An average adult human produces 500 litres of urine in a year and experts reckon this nutrient-rich 'waste' is enough to fertilise some 400-500 square metres of farmland. The nutrient levels in urine actually vary from country to country: an average Indian's yearly urine discharge contains 1.9 kilogramme (kg) of nitrogen and 0.3 kg of phosphorous, that of an average Chinese contains 3.5 kg of nitrogen. But these nutrients are put to little use. They normally mix with domestic wastewater and go out as sewage. But not in Kullon village: this residential colony near Vaxhom, about 32 kilometres from the Swedish capital, Stockholm plans to use urine as a fertiliser source.

In the late 1990s, when architects and planners sat down to deliberate Kullon's housing plans, urine separating systems held center-stage in their discussions. The residential complex comprising 100 houses is now ready and since early 2005, people have started moving in.

All houses have urine diversion toilets. A pipeline connects these toilets to a cylindrical plastic underground tank, where urine is collected. A 15 cubic metre tank suffices for a group of 4 to 5 houses; the tank costs about 40,000 kroner (us $4,000). The urine is stored in these tanks for about six months and then provided to local farmers for agricultural purposes. Separate pipelines take the remaining wastewater to sewage treatment plants in the vicinity of the residential area. From here they are discharged into the Baltic Sea.

Work on the project began in 2004; Vaxhom municipality's environmental and public safety agency spearheaded the effort. The management group for the project also includes Stockholm Vatten -- an association of farmers in the vicinity of the Swedish capital. Bengt Hansson, chairperson of the technical board of Vaxholm municipality, says its early days for the project. "Before going for urine collection system, it was important that we convinced local farmers about the advantages of using urine in their farmlands," he says. The municipality conducted regular meetings with the area's residents. The federation of Swedish Farmers and the Stockholm Vatten was roped in the effort. "So far we have been quite successful in our endeavours," Hansson notes with justified elation. The municipality plans to let the Kullon's residents take full charge of the project by early 2006

Hansson, however, rues that there are no obvious economic driving forces to organise a recycling system for human urine at a larger level. "But this can change very quickly once our experiment starts showing results," he adds optimistically.

Kullon's experiment has already aroused much curiosity in municipalities in the vicinity of Stockholm. A project, that uses the village's experience as a starting point, has already begun in the area. It focuses on agriculture as a nutrient-recipient of human urine. Economic incentives to induce farmers to this method are also being debated.

Says Karin Emilsson, an engineer with the Stockholm-based sanitary consultation firm, Verna. "The Baltic Sea, with its brackish water, is more sensitive to disruptions than other aquatic ecosystems. So, the Swedish efforts are quite relevant for countries located along the Baltic coast: Poland, Lithuania and Latvia ."

Let's hope there are more Kullons: puritans or no puritans.