Groundwater levels in the state in free fall 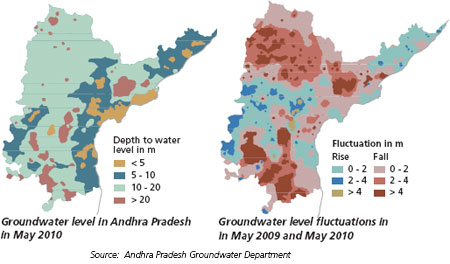 B Peddiraji, tehsildar of Butchayyapeta in Visakhapatnam district, added there is tremendous pressure on groundwater, with the level down to 91 metres in most villages. For instance, he cited, “Butchayyapeta mandal depends heavily on borewells as assured irrigation facilities are available only in three of its 32 panchayats.”

The April 2010 groundwater level report also said groundwater levels in the state is falling fast. Compared to last year there was a fall of 23.15 metres in Dhone mandal of Kurnool district. More than 80 villages across the state have seen a fall of more than four metres between 2009 and 2010, the report said.

“The fall of groundwater cannot be pegged to one cause (borewells). It is the result of deficit and infrequent rain, reduction in recharge area and lastly, over exploitation,” said Murli Krishna, director of the state’s groundwater department.

Despite heavy rains in 2008 the groundwater levels have only margi - nally risen in the state. According to officials the continuing fall is because of uneven rainfall across the state.

“Rainfall is the main source of groundwater recharge and during the last decade this source has become erratic and sometimes very low,” said Krishna. “People resort to groundwater because it is economical and easily available, and it consumes less time to drill a borewell,” he added. This is more so because of the limited surface water resources and their uneven distribution. Thus the strain on groundwater aquifers, mostly in upland areas, is increasing every day, Krishna said.

Andhra Pradesh is divided into 40 drainage basins and 81 sub basins of major and minor rivers. The 81 sub basins are divided into 1,229 groundwater micro basins of 100-300 sq km area based on drainage, geomorphology and hydrogeology. There is an addition of more than 50,000 groundwater extraction structures every year, said Krishna. In the last three decades well population—borewells and dugwells—increased from 0.8 million to 2.5 million.

But there is no record of the borewells that are dug illegally, admits C Suvarna, special commissioner at the state rural development department. The reason, she said, was the district water management authority under the groundwater department does not send them regular data. “When we question them they say the line departments, which include the mandal revenue office and the power department, do not submit any information to them,” she added.