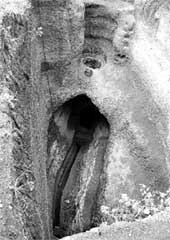 that Taj Mahal is by far the most exquisite example of Mughal architectural marvel, goes without saying. But some lesser-known wonders exhibit the more pragmatic side of the structural skills of these rulers. Khooni bhandara, an underground water management system, tucked away in the historical city of Burhanpur in Khandwa district of Madhya Pradesh is one such instance.

Contrary to the image of blood and gore that the name evokes, the unique system was once a life giving source. Evolved in the 17th century, it provided water to the entire city for as long as 312 years before it collapsed in 1977. The hint of red colour in this mineral rich water, gave it the name khooni (bloody).

Today, the potential of Khooni bhandara is again being recognised with authorities going back to this traditional system in search of an answer to the city's water scarcity problem. For this, Burhanpur Municipal Corporation has teamed up with Khandwa district with some monetary assistance coming in from the residents. The process, in its current first phase, has already shown encouraging results, augmenting the water supply by 0.11 million litres per day. Says city mayor Haroon Seth, "the revival of Khooni bhandara is proving to be a valuable source of water which can take care of the city's problem permanently."
The intricate underground water system was conceived by subedar Abdul Rahim Khankhana to realise Mughals' dream of developing Burhanpur as a base for expansion towards south. It's main purpose was to meet the drinking water needs of its two-lakh-strong army and the 35,000 inhabitants of the city, which was situated along the banks of the rivers Tapti and Utavali. Since the area also received a fair amount of rainfall, the real issue revolved around devising a system which would effectively tap these sources for an adequate supply of clean water. The specific need for an underground system, however, appears to be linked to the fear of the water being poisoned by the enemy.

Persian geologist Tabukul Arj drew up an ambitious plan in 1615, which centred on capturing the flow of rainwater from the Satpura hills towards Tapti and storing it at various junctures. These water storage places came to be known as Mool bhandara, Chintaharan bhandara, Sookha bhandara and Khooni bhandara. The water coming from Mool, Chintaharan and Sookha bhandaras collected at a common point to flow towards Khooni bhandara from where it was transported to Jali Karanja or Jal bhandara . Water stored here was then distributed through pipelines to the entire city.

Khooni bhandara is a network of 103 well-like structures called kundis, which are interconnected through a 3.9-kilometre-long underground tunnel made of marble. As the entire system was essentially based on the law of gravity, it ensured a smooth course of water from the first to the last kundi . In case of any obstruction, it was possible to rectify the problem by going down the kundi using iron stairs. Today, a rope is used for this purpose.
At its inception, the system had a storage capacity of ten million litres but over the years it steadily declined. Accumulation of calcium and magnesium along the tunnel walls, which has made these passages extremely narrow, is cited as the prime reason. Little effort, however, was made to conserve this structure. Consequently in 1975-76 its storage capacity reduced to 0.15 million litres while in 1997, it stood at a mere 0.04 million litres. In 1989, tenative steps had been taken by several environmentalists and historians to revive this system to meet the growing need of the city. But all these plans had to be shelved due to lack of funds. Meanwhile, the city's deepening water crises was aggravated with chemical wastes from the powerloom plant in the city contaminating the tunnel water as well as the rivers. In May 2000, 11 people died and more than 600 people fell sick due to water contamination by coliform bacteria (E-coli). Low rainfall in the following year further motivated people to revive the Khooni bhandara as a water source.


While the need for clean drinking water was paramount, the fact that as a heritage structure, Khooni bhandara had the potential to attract tourists also contributed in favour of the revival plan. Realising this, Praveen Garg, district collector of Khandwa, initiated a revival programme in December 2000. Once the district administration decided to take the plunge, they received a Rs 1.4-million worth monetary aid from the state government while Rs 0.1 million came as public donation via the Red Cross Society for the three-phase reivival plan. In its first phase, all the kundis have been cleared of siltation. Consequently, the water in the tunnel has started flowing again. The three kundis , which were lying damaged, have been repaired and tunnels cleared. After the completion of work, the storage capacity of these kundis is expected to increase manifold. According to Garg, however, "The result of this little effort itself is very rewarding as we are able to get an additional 0.15 million litres of water per day, which means a saving of about Rs 30 million." Meanwhile, the urban development authority has mobilised another Rs one million for the three-kilometre long road leading up to the first kundi . A provision for a lift to enter into the Khooni bhandara from the third kundi is also in the pipeline. As social worker Nafis Mansha Khan says, "this is the first-ever serious attempt to reconstruct this historical structure. The project will not only provide water to the city year-round but will also open up numerous opportunities in tourism."