Overgrazing is just the tip of the iceberg.The real culprit is mismanagement 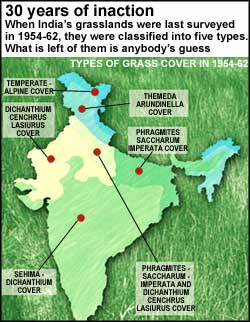 Scientists complain that overgrazing does not give the grasslands a chance to recover. Consequently, perennial grasses are replaced by seasonal varieties that have a low nutritional value. "Overgrazed rangelands also get infested by a variety of exotic weeds, many of which have spread at a really alarming rate over the past 3-4 decades," says S S Parihar, scientist at igfri. Exotic weeds are known to release chemicals that inhibit the germination of native grasses.

But it is not just the livestock that is destroying grasslands, says L N Modi of the Bharatiya Cattle Research and Development Foundation, a New Delhi-based non-governmental organisation (ngo). He feels that land grabbing -- conversion of grazing lands to other uses -- is more to blame than overgrazing cattle. "Grazing by cattle is not unsustainable as they cannot remove the grass from the roots. Besides, the dung and urine help in regeneration," he says.

"Poor management and constant grazing are responsible for most of these rangelands becoming less productive, providing the livestock with progressively less herbage and nutrition," says Panjab Singh of igkvv, Jabalpur. This means that more animals are required to produce the same amount of milk, putting further pressure on resources. It has also caused a shift in livestock: from cows and buffaloes to goats, which are extremely adaptive and can consume virtually any biomass, right down to the roots. Goats, therefore, pose the greatest threat to grasslands.

N S Jodha, analyst at the International Centre for Integrated Mountain Development, Kathmandu, says: "The livestock economy of India is characterised by low productivity, overpopulation of animals and their poor management and maintenance of stock." Most of the livestock depends on common property resources (cprs) for grazing, accessible to every member of the specific village community with no exclusive ownership right to anyone. As use of cprs does not involve additional expenses, most villagers stock up animals regardless of whether they are productive or not. "Whatever little production they extract is a small gain for them," says Jodha. It is a vicious cycle: the productivity of the cprs declines, which, in turn, further reduces the productivity of the livestock.

Village common lands and cultivable wastelands, formerly available for grazing, are being diverted to other uses, both by the State and the panchayats (village councils). "In village Ambabai of Jhansi district, the common land has been allotted by the panchayat for the construction of a hospital. Permission for removal of truckloads of soil has also been granted," informs P S Tomer, director, igfri. "Examples of such instances abound," he adds.

Land reforms introduced by the government have reduced the area under grasslands as well as the diversity of lands under cprs. A study of 11 villages from three districts of Rajasthan indicated a decline of 55 per cent in the area under cprs. A study by International Centre for Research in Semi-Arid Tropics, Hyderabad, indicated that since the 1950s, the area under cprs has gone down by 60-70 per cent in 80 villages of 20 districts in seven states. While the issue of land rights evokes friction between the forest department and livestock owners, areas under the revenue department are being diverted to other uses, such as redistribution to the landless. Village common lands are degraded, and suffer from what is known as 'the tragedy of commons': lands formerly managed and protected collectively are now used without a sense of ownership or responsibility.

So, rangeland managers and scientists cannot pass the buck on to overgrazing, as was done in the early 1980s in the Keoladeo Ghana National Park in Bharatpur, Rajasthan. A total ban on grazing was imposed in the wetland. A conflict ensued between the forest department and the local graziers, leading to a bloody protest that claimed 7 lives. But the ban has proved disastrous for the birds for which the sanctuary was created. In absence of buffaloes, grass grew amuck, choking shallow waterbodies and rendering homeless the winter geese and other birds.

There is no pure grassland sanctuary or park where all the elements of a grass ecosystem can be studied, says Rahmani. The diversity of rangeland species thus cannot be covered under protected areas. "Protection is only accorded when the region is declared a protected area for its flora and fauna," points out Rahmani.

Grass species are a low priority in research and conservation efforts. Good quality seeds are not available. Instances of farmers' successful attempts at grass cultivation are not recognised or encouraged. Range genetic resources can be conserved in gene banks or in fields. However, conservation efforts are tricky and difficult, and require a certain degree of skill (see box: Conservationists in the dark).

While efforts to conserve grass biodiversity are inadequate, farmers desiring to cultivate good quality grass cannot get good quality seeds. J P Singh of National Dairy Development Board, New Delhi, says: "Against a requirement of 150-170 metric tonnes of breeder seeds, the availability is 30-50 metric tonnes. With a shortfall in breeder seeds (which are supplied by the Central government to various states for further development and distribution to farmers) of more than 80 per cent, how can farmers even attempt to cultivate their fields? This gap is only going to widen. Besides, most government attempts at greening with grasses are on degraded and eroded lands -- grasses are already at a disadvantage."

Management of rangelands and pastures involves the integration of various operations: fencing, soil and water conservation, improved grazing practices and increasing the productivity of pastures.

"On one hand is the fodder crisis, and on the other fodder is wasted. About 300 million tonnes of fodder can be made available for cattle if it were not simply burnt, as in Punjab, where it causes major air pollution, or diverted to industry or simply allowed to rot," says Modi. This amounts to the destruction of a national asset. In the European Union, burning of fodder is banned, Modi points out. However, the Indian government does not give any incentives for the use of crop residues as fodder.

At the same time there are incentives from the ministry for non-conventional energy to burn sugarcane residue for power generation. Modi observes that this residue can be very good fodder if it is treated with the addition of molasses. Failure to identify and implement such simple solutions results in greater threats to the ecology down the road, and this is the central flaw in the centralised planning structure of the government. Rangelands have clearly suffered due to this. Grasslands will not exist for long if some policy changes are not made and implemented immediately. They include:

lGovernment stress on quality of livestock, rather than quantity.

lOvergrazing may be an important reason for degradation but the onus really rests with institutional policies rather than the livestock owners.

lA long-term strategy based on sound research needs to be chalked out to meet production targets with fewer animals.

lThere is no rangeland policy. As things stand, the Union ministry of environment and forests and the ministry of agriculture are quibbling over whose baby grazing really is. Existing policies for pastoral areas fail to appreciate the practical or valuable implications of traditional pastoral systems. These systems should be researched objectively and improved upon to meet current requirements.

lA national policy on livestock population and the creation of forage resources has to be formulated -- and implemented. Public support will come forth only if some alternative arrangement to meet grazing requirements can be suggested.

lBefore any programme for rangeland development is even considered, it is essential that local needs be integrated into the science of it.

1One of the biggest gaps is the absolute lack of data and surveys. This situation needs to be corrected on priority.

If these policy and management issues are not tackled with urgency, the survival of the abundant rangeland biodiversity, the livestock, and the rural economy will be jeopardised beyond repair.

With reports by Kazimuddin Ahmed from Rajasthan and Gujarat