Where have all the people gone?

The ministry of environment and forests' plan to conserve biodiversity excludes the people.

Where have all the people gone? 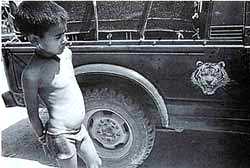 THE ministry of environment and forests (MEF) has drawn up a grandiose eco-development plan to garner funds from the Global Environment Facility (GEF) for biodiversity conservation. MEF sources say a proposal for GEF funding was rejected in 1992 because it did not have much significance for the global environment. Now, to fulfil the criteria for the funding, MEF officials have imaginatively interpreted eco-development as the best way to ensure biodiversity conservation.

Eco-development is a strategy to protect ecologically valuable areas that are vulnerable to the unsustainable pressures of activities of people living in and around such areas. Indian foresters believe eco-development is the magic cure for all that ail the country's national parks.


The plan is supposed to involve the people in the protection of these areas. However, they will no longer be able to use forest-based resources and will have to find alternatives outside the protected areas. According to H S Panwar, director of the Wildlife Institute of India in Dehra Dun, "Eco-development is seen as a site specific package of measures derived through people's participation, which addresses all aspects of land use and other resources in order to promote sustainable practices."

The ministry has selected eight areas -- Buxa, Periyar and Palamau tiger reserves, Nagarhole, Pench, Simlipal and Ranthambore national parks and Gir sanctuary -- to be protected. Measures to deal with issues and constraints specific to each parks will be mooted jointly by non-governmental organisations and the local forest departments. These plans, to be finalised by March, require an estimated $12 million in aid. The measures will be replicated later in other protected areas.

But MEF's new plan may run into problems with the World Bank, which channelises GEF funds. Senior ministry officials reveal that the World Bank is already under attack for promoting development projects that cause large-scale displacement of people and has become wary of proposals that entail relocation. Says S Debroy, consultant to MEF, "The Bank had made it clear in the beginning that it would not like to get involved in any project that requires relocation." To get the World Bank's nod, the framers of MEF's proposal have consciously avoided the issue of relocation. Says S C Dey, additional inspector general of forests, "Questions would be asked on the possible resettlement of the people living inside, but we do not want to build in the issue of relocation in our eco-development plan."

MEF officials admit problems can crop up when the proposal is reviewed. Some point out that the World Bank may ask for proof that the people's needs will be taken care of relocating them. Debroy points out, "Similar demands have been made elsewhere in Africa. In World Bank-aided biodiversity projects in Africa, facilities are provided to people living even inside the forests. They expect a similar model in India, to which MEF will not agree."

Though the eco-development proposals are silent on relocation, it is clear that those living in the forests will be affected. Forest officers insist that eco-development plans can be drawn up even if people living inside forests are excluded from them. Panwar says no one will be forced out of the parks. But he hopes voluntary relocations will take place and be successful enough to get the people to agree to resettlement.

However, a reading between the lines reveals crucial disparities between the needs of the people and that of conservation of forests. Development activity is totally premised on alternatives. For instance, in the Periyar tiger reserve, the eco-development plan asks for "alternate and sustainable fuel sources like biogas plants, solar cookers and fuel-efficient devices like smokeless chulhas". In the Simlipal tiger reserve, the provision of an alternate grazing ground has been advised.


However, there is little definitive information on the quantities involved in these alternatives and doubts exist about whether the people's needs will be taken care of, especially in the initial stages of the plan. The bureaucrats say the plans are only "indicative" and that they expect precise information to emerge as work progresses. However, in the absence of precise knowledge, the plans merely sound agreeable.

In fact, the proposals make no mention of the people living inside the forests. Officials claim they don't have precise knowledge of the number of people who live in the parks. However, a study of 171 national parks and sanctuaries, conducted in 1984-85 by Ashish Kothari and his colleagues at the Indian Institute of Public Administration (IIPA), found there were 1.6 million people living in the 118 that were inhabited.

And, though people's participation is talked about, the reality is that local forest administrators will be making decisions on the people's requirements. Says Prabir Guhathakurta, forestry consultant to the World Bank, "In one of the parks, the problem of low water table is the first priority item. But it gets a lower priority in the action plan. There is a need to reconcile the priorities of demand and the strategies."

"What the people want is not always acceptable as eco-friendly," says Arin Ghosh, director of Project Tiger. For instance, people living near the Great Himalayan National Park in Himachal Pradesh want to take up cultivation of charas and apples. Says Shekhar Singh of IIPA in New Delhi, "The first is not acceptable on moral grounds and the latter would create pressure on forests for packing boxes."


Some officials resent the criticism that biodiversity protection schemes do not consider the people living inside. "Eco-development and conservation are impossible if parks are not totally exclusive of human intervention," says Dey. This opinion is shared even by hardline NGOs. Pleads Valmik Thapar of Ranthambore Foundation: "Can't we leave at least 5 per cent of the total land area alone?"

There are also NGOs that have deliberately avoided the issue. Says Vasundhara Shankaran of IIPA, who is involved in the formulation of the plan for the Great Himalayan national park, "This is a policy issue. The government would have to decide first what it would like to do with the people living in the forests." There are two villages inside the park, which is inhabited by 66 people. Says Singh, "There is no need to disturb them, especially because they can be of great help in protecting the park and managing tourism."

Nonetheless, the issue of excluding humans has not prevented officials from dreaming up ambitious plans of what they consider eco-development. The irony is symbolised by a lift irrigation system proposed by the Ranthambhore forest department in the Banas river despite opposition from the Ranthambore Foundation. Says Thapar, "It is not desirable to put money in such ambitious projects that might have a more destructive effect."

In their zeal to keep people out of biodiversity preserves, officials do not even deem it fit to allow people to participate in the management of the parks. There is virtually no scope in the eco-development plan for officially sponsored joint forest management systems that envisages sharing the benefits of preservation with the people. Officials merely dismiss any proposal for people's involvement as a "romantic vision".