The Gloria Land farm in Pondicherry and another run by a couple in Karnataka, show natural inputs can effectively replace factory produced fertilisers and pesticides. 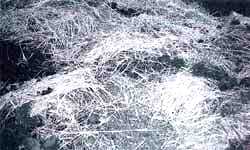 WHAT DISTINGUISHES the Gloria Land (GL) farm of Pondicherry's Aurobindo Ashram and the farm run by Julie and Vivek Cariappa near Mysore from that of their neighbours, is that a mash of leaves, cattle dung and a carefully chosen mix of crops have displaced inorganic fertilisers and pesticides completely. Yet production has not been affected.

GL was started in 1963 on 12 ha of land in Pillayarkuppam near Pondicherry. Another 28 ha were added later. There was no water shortage thanks to the six borewells dug for irrigation. Till 1970, the farm used synthetic fertilisers and pesticides, but then, a definite decline was noticed in GL's yield levels and soil quality.

Pests increased and diseases became rampant, reveals GL manager Manindra Pal, "because pests became resistant to chemical pesticides. Soil fertility declined because of continuous application of fertilisers". Paddy yields fell from 8 tonnes per ha to 4 tonnes per ha, leading to the decision to experiment with organic manures. Today, only organic farming is practised in GL.


Agriculture is highly intensive in GL, as in the rest of Pondicherry, where 84 per cent of the area is cultivated more than once. Abundant water from the Pennayar river and an average annual rainfall of 1,000 mm enables the cultivation of water-guzzling crops such as sugarcane and paddy.

Neem leaves, plants and weeds that grow in the fallow fields, cow dung and crop residues are ploughed into the soil at GL in increasing amounts every year to restore soil fertility. Plant-based pesticides and cattle urine are used for controlling pests.

The dung and urine of the 250 cattle at GL are accumulated in a pond in which slurry from three biogas plants is also collected. This mixture, which makes excellent manure, is pumped directly from the pond to various plots. Says Natesan, a GL worker, "The slurry in the pond is stirred up every month to bring out the sediments, which are very fertile."

GL's success lies in the efficient use of modern science for eco-friendly solutions. HYV seeds are used for rice, grass and vegetables. Cross-bred animals are reared. Besides, plants such as sesbania are grown from March to June for nitrogen fixation.

Unlike GL, Julie and Vivek Cariappa were keen on experimenting with organic farming from the time they bought a five ha farm in Birwal village of H D Kote taluka, in Mysore district, in 1986. Says Julie, "My work at the Centre For Science and Environment in Delhi exposed me to environment-friendly farming and I decided to start something of my own."

At the Cariappas' farm, located near a small dam on the Nugu river, cotton, paddy, millets, sugarcane, vegetables such as carrot, radish, tomatoes, cabbage, coriander, coconut and other crops are cultivated on 3.5 ha, while broadcast cultivation of Manipur black paddy is being experimented with on 0.2 ha. Creepers, shrubs and trees that provide herbicides and wood for agricultural implements are grown on the remaining land.

The Cariappas cultivate bottle gourd, jowar, maize, ragi, sunflower, sunhemp, pigeon pea and amaranth as mixed crops on dry land. "After all, one doesn't necessarily have to grow paddy," says Vivek. The major advantage of this is that total crop loss due to droughts or pests can be avoided. Julie explains, "Even if one crop fails, the others provide returns. And if one crop absorbs more soil nutrients, the others compensate by fixing nitrogen." Indeed, for the Cariappas, their diversified cropping pattern is the key to success.


Says Julie, "In organic farming, we don't have rigid formulas for applying inputs. Everything, from sowing to harvesting, is experimented with and many things learnt on the job. Its not pre-planned and unlike scientists, farmers don't have to depend on outsiders."

GL's cropping pattern, too, is diversified, with bananas, paddy, grass and fruit being grown. Paddy is grown twice a year on approximately 20 ha of land. Grass is cultivated on 18 ha, bananas on 10 ha, and vegetables on 6 ha. Fruits such as mango, coconut, lime, gooseberry and jackfruit are grown on 8 ha. Bananas and grass are cultivated continuously on the same plot for several years.

Though Pal says factory production of biofertilisers is possible, a mixture of wet straw and leaves -- called mulch -- is used to enrich the soil in both farms. "Using mulch on vegetable plots reduces ground moisture evaporation, softens the soil and increases its fertility," explains Vivek. The Cariappas also use biogas slurry, weeds, hone (pongamia), marigold and dung as compost.

The use of organic methods notwithstanding, the yields at the two farms are favourable when compared with farms that use synthetic fertilisers and pesticides, especially for cash crops such as bananas and cotton. GL's annual banana yields were 100 tonnes per ha consecutively for 10 years. The 18-ha kenyapul (napier grass) plot yields 7,200 tonnes of fodder annually.

Such a high level of production, says S Jeyaraj, former vice-chancellor of the Tamil Nadu Agricultural University (TNAU) at Coimbatore, can normally be sustained for five years only with chemical fertilisers. Last year, the Cariappas' long staple HYV cotton yield was 0.75 tonnes per ha under rainfed conditions. Though the Cariappas spent only Rs 2,000 per ha, mostly on wages, the market value of 0.75 tonnes is Rs 6,750.

The Cariappas spend hardly anything on pesticides, even for a vulnerable crop like cotton, depending instead on traps, a protective fence of sweet corn that is higher than the cotton plants and spraying decoctions of neem and cow dung. In fact, experiments by S Uthamasany, a professor of entomology at TNAU, showed that spraying neem oil and neem-seed-kernel extract in the initial stages of infestation effectively controls leafhopper and aphids in tender cotton plants.


The Cariappas apply plant-based pesticides to other crops too. They say spraying half a litre of garlic juice mixed with 4 litres of water on a 0.2-ha-plot is enough to protect cabbage. A decoction of vica, an ornamental plant, is also an effective pesticide, while spraying dried cowdung soaked in water for a day on vegetable crops enhances productivity.

Disposal of produce isn't a problem at either farm. GL's products are consumed by the Ashram and the Cariappas and their two children consume most of the cereals and vegetables they grow.

In 1992-93, the Cariappas spent Rs 2,000 on hoeing, composting and irrigation for their 0.8 ha sugarcane plot. There were no profits that year because floods caused by excessive rain in Birwal affected the crops. However, four tonnes of turmeric, grown at a cost of Rs 7,800 on one ha, fetched Rs 30,000 in the market.

But the system does tend to collapse if marketing is not assured. GL had to abandon mulberry cultivation, which it began in 1992, because "the middlemen dictated the price and the market was not assured for the cocoons", according to Pal.

Practitioners of organic farming are keen to spread the message to other farmers (See also page 49). Between 1986 and 1988, GL conducted training courses in ecological agriculture for agricultural extension officers and non-governmental organisations (NGOs). The Cariappas train the people in their neighbourhood in water conservation, tree plantation and farming techniques.

Nanjundaiah, field coordinator of an NGO based in H D Kote, says, "Both Julie and Vivek are excellent resource persons for training in construction of percolation ponds, check dams and planting saplings in tribal areas." The success of the two farms has not really influenced the local farmers very much, who say they do not have the resources, water, land or cattle to undertake such operations.

K K Bhattacharya, director of Pondicherry-based NGO Agriculture Man Ecology (AME), who spent four years at GL says availability of external funds makes GL's operations feasible. The region's small and marginal farmers cannot make such huge investments for constructing pukka cattle-sheds, pipelines and ponds for the collection of dung and urine. Pal disputes this saying, "None of these things are really needed for organic farming. Our experience shows three cows are enough for 1 ha of dryland and six cows are sufficient for 1 ha of wet land."


Though Pal says GL's organic farming reduces water consumption, observations indicate otherwise. At least one of the six pumpsets operates round the clock. The paddy and banana crops are inundated on alternate days from the borewells, leading a farmer to remark, "Water is GL's basic input and if something goes wrong with their pumping system, they can't even breathe." Pal asserts, "GL is self-sustained in everything except energy, for which we are trying to install a solar power plant."

GL doesn't maintain records of input costs, which would enable fine comparisons between inorganic and organic farming, "mainly because a lot of unseen costs are involved as I do certain farm operations and plant-based products and manure are obtained from the farm itself", explains Pal. According to him, for paddy, 70 per cent of the total expenditure is on farm power alone, 15 per cent is on manure, 10 per cent on electricity and 5 per cent on seeds. He adds that "the profit margin would vary from 30 to 70 per cent depending upon the crop and season".

The Cariappas' neighbours, too, associate high yields with heavy doses of chemical fertilisers and pesticides and wouldn't like to experiment with unknown pesticides like plant decoctions. R Subbana, a small farmer of Birwal, says, "Hybrid seeds, chemical pesticides and farm practices are recommended by the government agricultural department, but nobody explains anything about organic farming. How can we practise something we know nothing about?"

Lack of knowledge apart, availability of resources is another constraint to wider adoption. A farmer, speaking on condition of anonymity, said, "Cariappa has tillers, animals and pumpsets, which are essential for farming. We have nothing."