Of the 12,619 Gram Panchayats in Tamil Nadu, one-third or nearly 4,200 panchayats are headed by women -- following the 73rd amendment to the Constitution which stipulates that one-thirds of all panchayat presidents in a state should be women 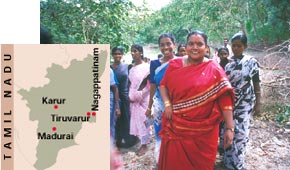 april 30, 2003: 158 gram panchayat (gp) presidents of Karur district in Tamil Nadu are up in arms over a district collector's order. It has taken away their right to administer the food for work scheme in the district. Worse still, it has conferred this right to the panchayat union chairman -- the next rung in the local administration. Leading the gp presidents' protest is Eswari Subramanian, the president of Appilayam gram panchayat.

eswari subramanian and Rani Muniyakunnu belong to a growing tribe in Tamil Nadu: women gp presidents. Of the 12,619 gps in the state, one-third or nearly 4,200 panchayats are headed by women -- following the 73rd amendment to the Constitution which stipulates that one-thirds of all panchayat presidents in a state should be women. "But for reservation I would never have become the panchayat president," says Ponni Kailasam, the first woman president of Aanaikuppam panchayat, Tiruvarur district. But make no mistake. The feisty women belie the insinuation of rubber stamp leaders that is commonly levelled against women gp presidents. One of the first actions of Ponni, as president of her panchayat, was to convene a gram sabha meeting and pass a resolution against the widely prevalent illicit arrack. She is today a very vocal president of the Federation of Women Panchayat Presidents in Tamil Nadu (fwpptn).

Says P G Palanithurai, head, Rajiv Gandhi chair for panchayat raj studies, Gandhigram Rural Institute (gri), Dindigul, "Women panchayat leaders have abundant common sense and commitment and they have picked up the technique of politics very well." He points to the alacrity with which Ponni reacted to an announcement that the government was planning to introduce cheap liquor. "Ponni who was at gri for a training programme immediately called up the media, spoke to them and the very next day the headlines were her's," marvels Palanithurai.

Tamil Nadu's women panchayat presidents combine political savviness with a remarkable zeal to challenge traditional power systems in the villages. The women leaders are particularly irked that the control of the village common properties like ponds and tanks is with the naatanmais (traditional power groups). According to section 132 of the 1994 Tamil Nadu Panchayat Act, all common properties belong to the panchayat, which has to maintain them. The women presidents believe in this provision -- in letter and spirit. Says Ponni, "The panchayats have a lot of common properties, especially the tanks, ponds, quarries and trees, which are in the hands of a few individuals or groups. They should get back these properties and be able to conduct auctions and generate funds".

Palanithurai feels that people have more faith in the naatanmai system as they are not yet convinced that the panchayat raj is here to stay. "In the absence of the elected panchayat system, the people have seen the special officer manage the panchayats. So they feel, it is better the naatanmai continues to administer the common properties," he says. The naatanmai system comes into use when the gp has to look for some temporary source of funds. Yet, wherever possible, women presidents are testing the hold of this traditional system.

One good example of this is the Thiruvidaivasal gp in Tiruvarur district, where an influential group controls fishing rights over seven tanks in contravention of the 1994 Tamil Nadu Panchayat Act. Says Malar Malazhagan, president of the gp of Thiruvidaivasal, "The panchayat is losing a minimum of Rs 1 lakh in revenue per year from the seven tanks." Malar has been at the forefront of the Thiruuvidaivasal panchayat's battle for regaining rights over the seven tanks. She has filed a writ petition on behalf of her local body in the high court.

The women presidents are also chipping away at caste barriers, displaying ecological concerns and looking for ways to improve the quality of life of people in their villages. Says S Neelakantan, former director, Madras Institute of Development Studies, who lives in Appipalayam village, "Eswari took the bold step of hiring a dalit as the village clerk -- he has to visit each house to collect taxes. Measures such this can pave the way for ending social ostracism of the dalits."

In Vanduvancherry, Nagappatinam district, Rani Muniyakannu is waging a battle against the silicone sand miners in her panchayat. A village rich in resources, Vanduvancherry has been a victim of mining since 1995. Today the village is criss-crossed with craters, some of which are filled with waters. "Our village falls in a coastal area, so if you dig more than 10 feet deep, the water becomes saline. These miners dig more than that and saline water gets filled up in the pits and that affects the groundwater and the plantations. Ground water resources and recharge is rapidly declining because of the indiscriminate mining of the topsoil and consequent erosion", complains Rani.

Though they managed to get licences to mine, the mining companies have exceeded the specified area for mining. And the constant movement of lorries has spoiled the roads. "The panchayat doesn't get any income from this and still we have to spend on road repairs," complains Rani. So, the Vanduvancherry panchayat led by Rani passed resolutions against mining, boycotted the parliamentary election in 1998, coordinated the setting up of a joint action committee against silicon sand mining and picketed the lorries. Rani was arrested and then released when the villagers blocked the roads. She says, "The companies are trying to exploit the poverty of the villagers. They give money to private landowners who are badly in need of money and take sand from their land. The people do not realise the problems that lie in store for them till they get affected. The companies have also tried to silence us by saying they will construct marriage halls, roads and other amenities for the village if we allow their vehicles to pass without any problems. Personally I have been offered money to keep away from the fight. We have resisted all these in the hope that someday we will be able to stop this mining." "I am planning to get together the people from other places, like Marakkanam, where such mining is going on, and then have a larger meeting and protest. We are also planning for a large-scale fast to catch the attention of our Chief Minister," she continues. Rani also presented her village's case in a people's public hearing on the impact of sand mining in Tamil Nadu, held in February 2002 in Chennai.

There is no dearth of problems for these feisty women. For all her work, Malar of Thiruvidaivasal is dependent on her husband to articulate the woes of her panchayat. This being her first term, she is unsure of herself. Does this then mean that the system of proxy is alive? Says Ponni, "We do not have a salary, and the travel allowance is just Rs 300. If the husband doesn't support, where will the women be?" According to Palanithurai, "Proxy is being operated with the support of the officials who prefer to deal with the husbands than the women presidents. But thanks to the federation, it is gradually on the wane." Adds Ponni, "Many more women come to the gram sabha meetings than before and a lot of women presidents are asserting themselves today."

Their developmental works sometimes land women panchayat presidents in trouble. T Poongothai, the president of the Keelavalavu panchayat in Madurai district, was removed from her office by the collector of the district using his powers under section 205 of the Tamil Nadu Panchayat act. The reason: cutting and auctioning trees and "misappropriating funds". A resolution to cut trees grown in the local pond and tank had been unanimously passed in the gram panchayat. Poongothai has taken the issue to court. The fwpptn reacted by condemning her removal and demanded immediate repeal of section 205.

Says Ponni, "The federation is a source of security and a support system for women leaders in panchayats. They know they are not alone." fwpptn has been constantly evolving and undergoing its own democratic convulsions. It split into two groups in February this year with Ponni heading one group and Eswari the other. Ponni acted fast and formally registered her group. What is more, she met the state government officials to present the federation's demands (see box on first page: What Tamil Nadu women panchayat presidents want).

There are sure to be more tribulations for women panchayat presidents. For, they are taking on powerful people without much official patronage and an almost total lack of support from elsewhere.