Bengaluru experienced its heaviest rainfall in 127 years and subsequent flooding on August 15. While the rain lasted only 3 hours, the urban flood has been in the making for years

Bengaluru woke up to a flooded city on Independence Day (August 15), after overnight torrential rains. This was the heaviest downpour in 127 years, with 129 millimetres rainfall under three hours. The weather event turned out to be 3-4 times the intensity forecast by Karnataka State Natural Disaster Monitoring Centre, reported news agency IANS. The storm water drains failed to clear out the water.

Civic authority used boats to rescue many people stranded in inaccessible regions. Power outage caused blackouts in many parts of the city. Commercial hub Koramangala was reported to be the worst affected.

On January 8, 2016, the House Committee on Tank Encroachment under the Karnataka legislature, released a press release with the names of encroachers who have killed lakes in and around Bengaluru. Those named in the press release were mostly real estate developers. But astonishingly, government agencies like the Bengaluru Development Authority and Bruhat Bengaluru Mahanagara Palike (BBMP) too have been held in the report to be equally responsible for concretising lake beds, says K B Koliwad, the chairman of the eleven member-committee. The government agencies together have encroached more than 30 per cent of the total encroached area of 4,238 hectares according to the report. Read the complete story 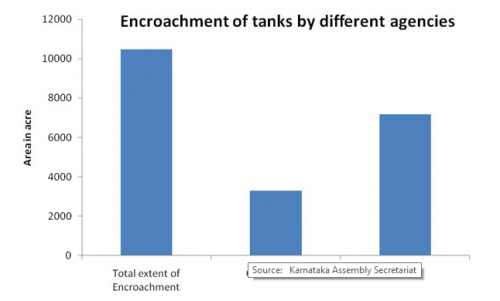 Once it was truly a city of lakes

Bengaluru’s lakes are not natural lakes, but human-made tanks created by damming the flow of water at various points. Three valleys in Bengaluru—Koramangala and Challagatha in the southeast, Hebbal in the northeast and Vrushabhavati in the west—determine the flow of water in the city. A series of interconnected cascading tanks were created over centuries along the inclines of these valleys. One tank’s overflow was carried to the next tank through a wetland system, which included rajakaluves, or canals. In this manner, six chains of tanks came into being. The water flow in the tanks was regulated through a community-operated sluice mechanism. The absence of a major river in Bengaluru led to the need for such a system. There was a need to harvest rainwater which could then be used for irrigation and household needs and livelihood activities such as fishing. The tanks served this purpose. Read the complete story

E-book Why Urban India Floods highlights how unfettered urbanisation has led to the depletion of waterbodies in urban areas, which has pushed urban floods. The book shows the problem of urban floods with real examples and how almost all the urban centres in the country are at the risk of floods. 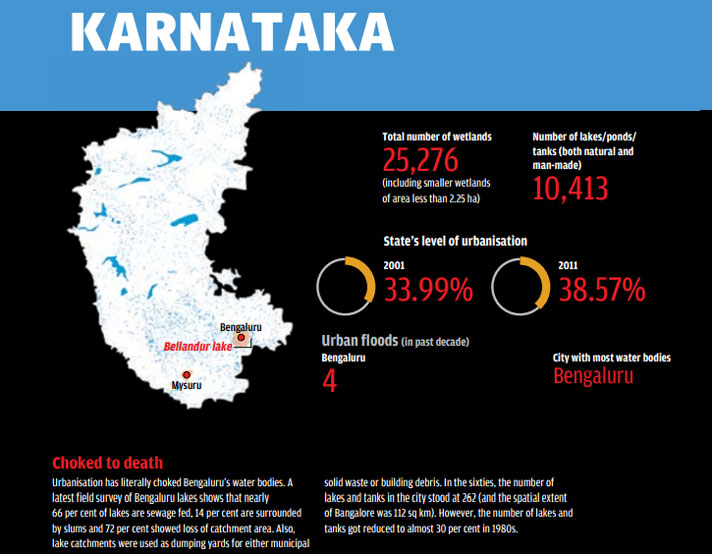 It is important to understand the “newness” in the growing numbers of “very heavy” rain events. The fact is that scientists have long warned that as the planet warms, not only will it rain more, but this rain will become more variable and more extreme. This is what we are beginning to see more and more. Read the complete story