India locked down, but challenges remain

As India entered a 21-day lockdown on March 25, 2020 in a bid to contain COVID-19 spread, thousands of daily wage labourers and migrant workers were left with nowhere to go. While some streets were eerily deserted, some were dotted with workers heading back home — on foot 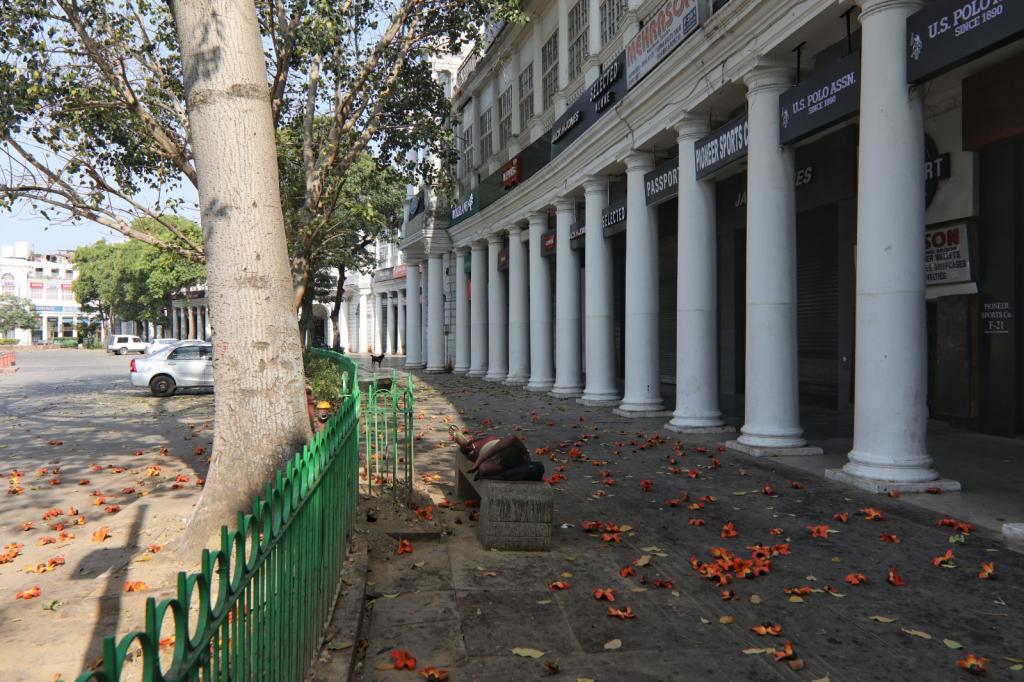 A deserted view of Connaught Place, New Delhi, on the first day of Janta curfew on March 23,2020. Before the country went into complete lockdown on March 25, Prime Minister Narendra Modi asked people to stay off roads and public places for 14 hours in a bid to encourage social distancing to control COVID-19 spread. 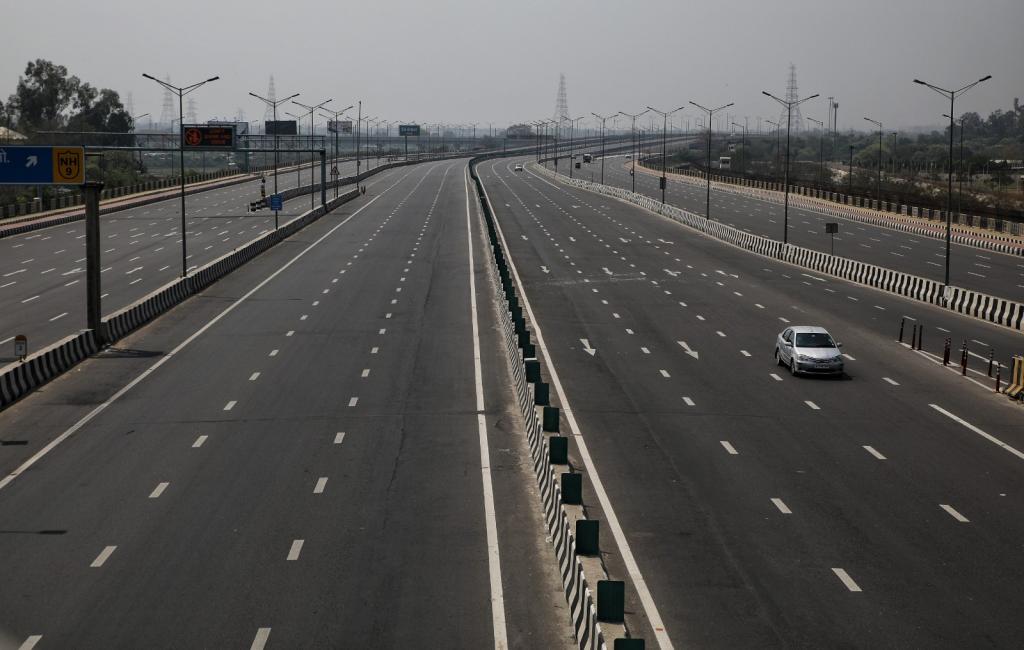 Delhi-Meerut expressway near Akshardham temple wears a deserted look. Taking leaf from other affected countries such as China, France, Italy, New Zealand and the UK, the Indian government decided to go for a 21-day lockdown, which began on March 25. People cannot go out of their homes, except in cases when they have to buy food and medicines. The idea was to break the chain of transmission of SARS-CoV-2 virus and contain novel coronavirus spread. 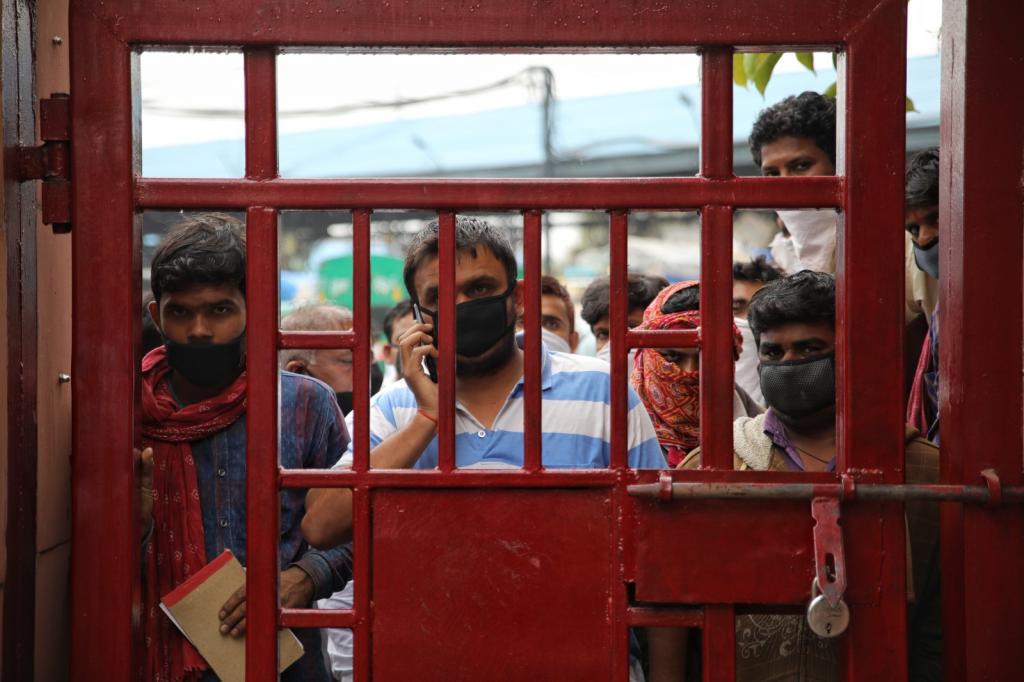 Vendors waiting to get work permit to sell vegetables and fruits outside agricultural produce market committee office, Delhi. As panic ensued following PM’s address declaring complete shutdown, the Ministry of Home Affairs came out with a comprehensive list of essential services that will function during the lockdown period. 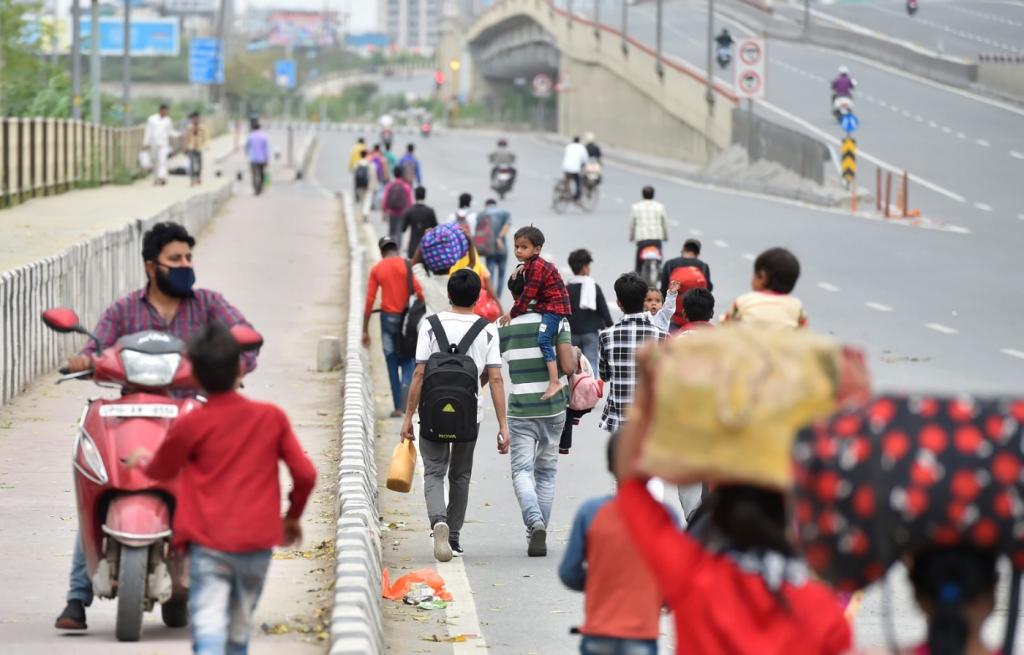 Migrant workers and daily wage labourers start walking to their villages hundreds of kilometres away. Without work and public transport, workers were left with little choice but to head back home — on foot. 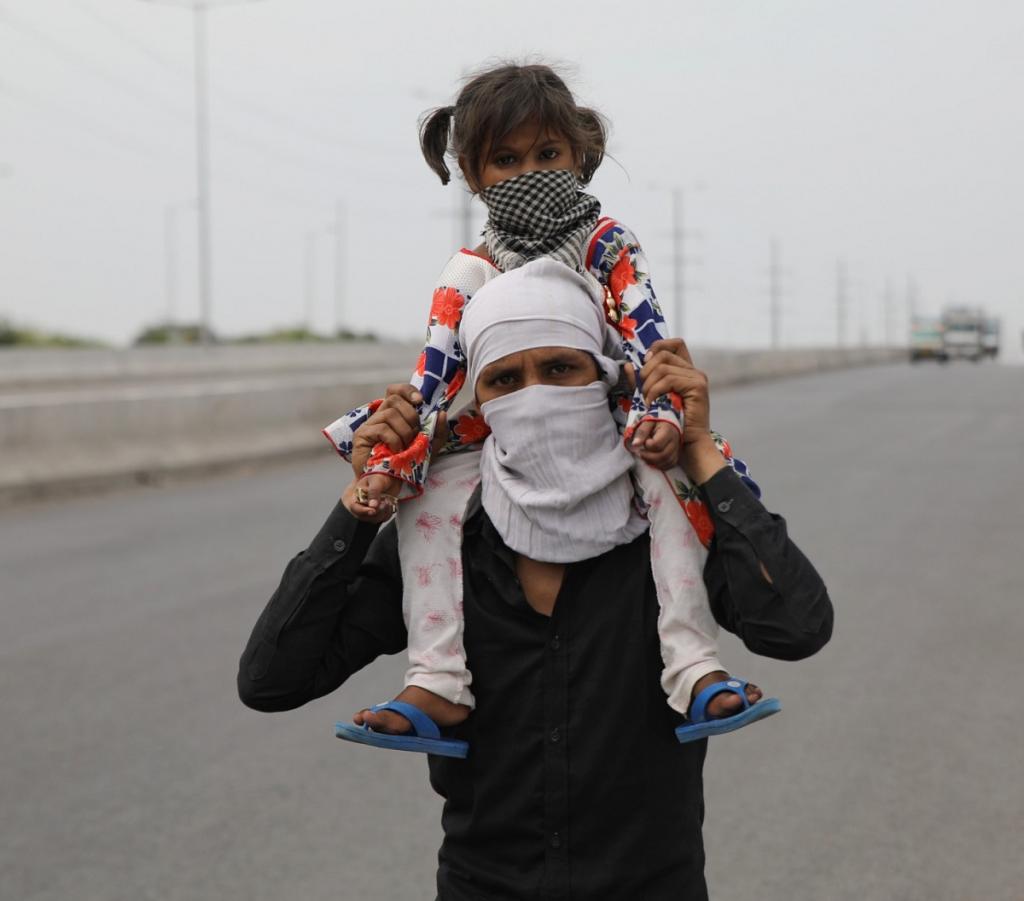 A man carries his daughter on his shoulders. Most labourers said that without work, they could not survive in the city. The Union government received flak for mismanagement that left thousands of migrants in the lurch. 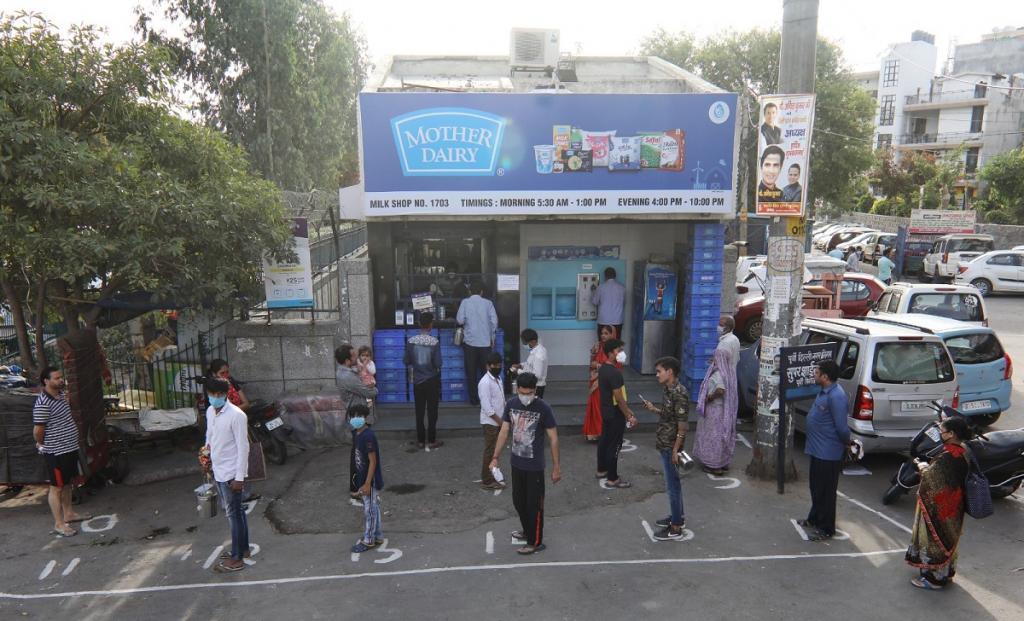 People maintain safe distance while buying milk from a Mother Dairy booth in East Delhi. Circles were drawn outside several grocery shops to encourage people to practise social distancing. The irony of the lockdown played out here — as some streets remained deserted or saw very few people, others were thronged by daily wage workers, including women and children, walking back home. 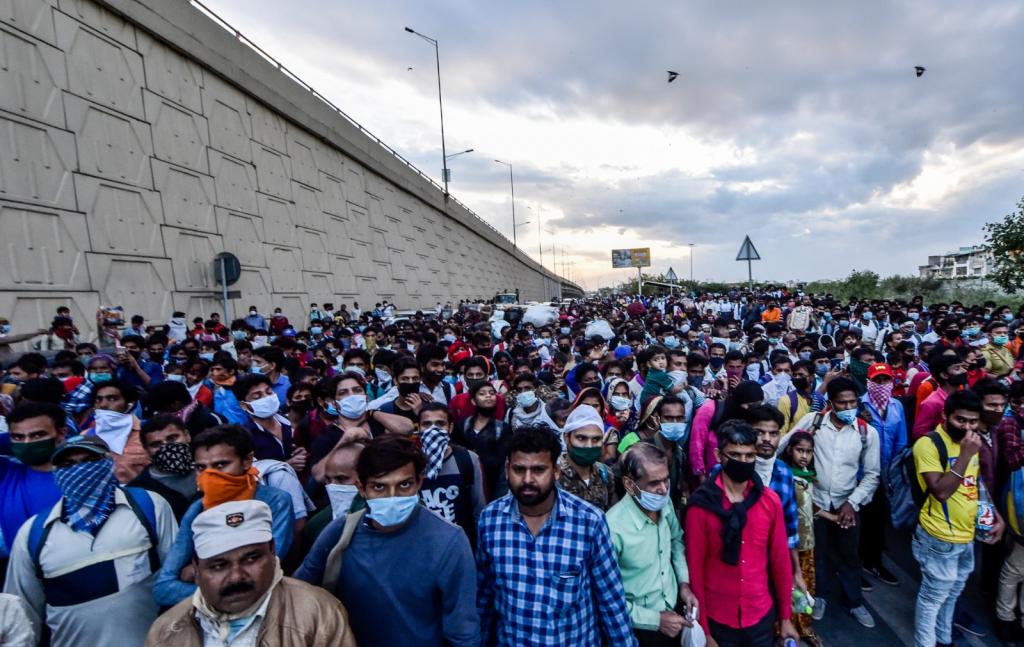 Hordes of people wait in large gatherings at the Anand Vihar Bus Terminal. Following extensive media reportage on the plight of workers, the Uttar Pradesh government arranged 1,000 buses for stranded workers on March 28 to ferry them to their homes. 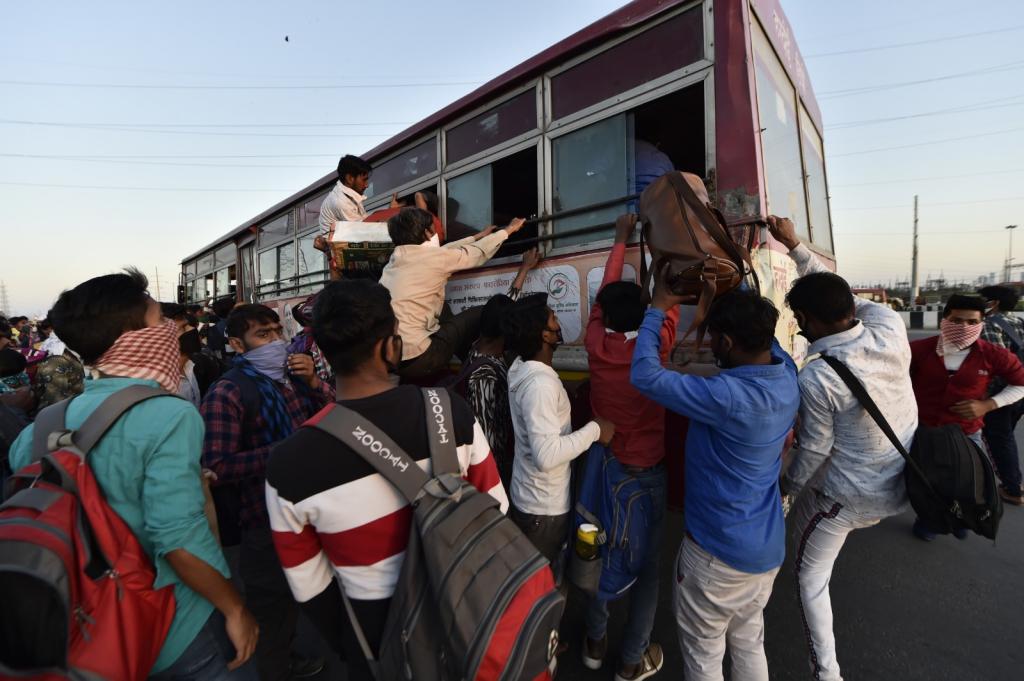 Workers try to board bus at Anand Vihar bus station amid lockdown, Delhi. Mandatory social distancing, reiterated by PM Modi in both his addresses, was impossible in such a scenario. At a time when the government is hinting at community transmission, such gatherings have already posed a massive health risk. So what purpose did the lockdown serve? 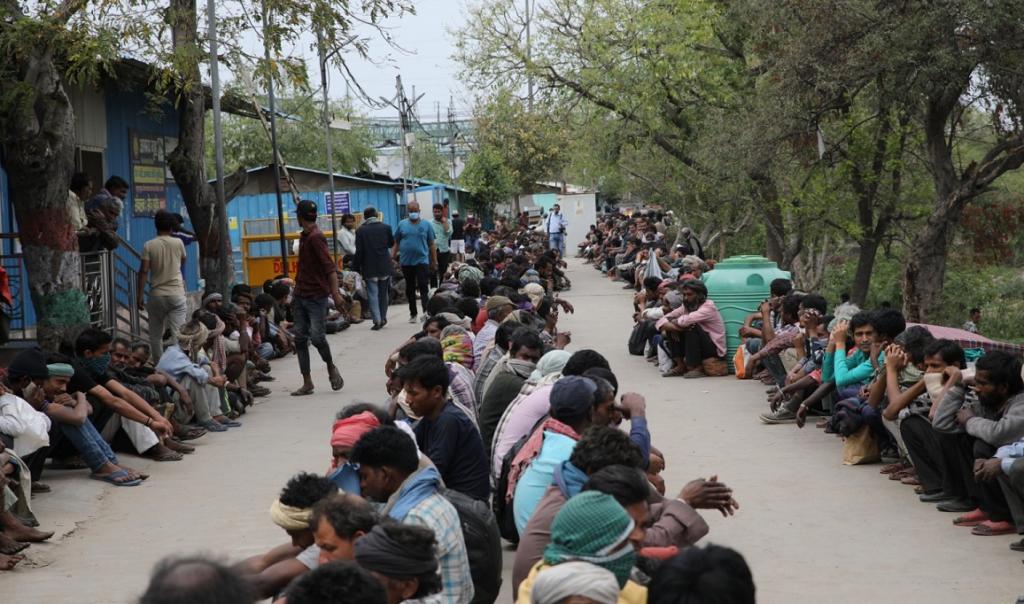 Homeless people wait for food at a night shelter near ISBT Kashmere Gate. On March 23, the Delhi government announced free meals for the poor and homeless at city’s night shelters. On March 29, PM Modi, in his monthly radio programme Mann ki Baat, apologised to the poor workers for “causing them inconvenience” and sought their forgiveness. He added that people would be have to patient for several days to come and maintain social distancing.