Climate change negotiations get emotional because carbon dioxide emissions are closely related to individual lifestyles - and to national economies. For instance, the per capita GHG emissions of … 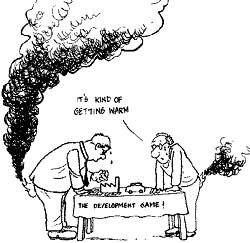 UN FRAMEWORK CONVENTION ON CLIMATE CHANGE
In force from March 1994, ratified by 176 countries

KYOTO PROTOCOL
Signed by 84 countries, not yet in force

A political process driven by climate scientists, which began in the mid-1980s, resulted in the Framework Convention on Climate Change ( fccc ), signed by 154 countries at the un Conference on Environment and Development ( unced ) in Rio in 1992.

From the start, fccc travelled a bumpy road. Because rich industrialised countries were unwilling to commit themselves to definite reduction targets, the convention meekly called on them to adopt national policies to stabilise their emissions to 1990 levels - a target taken seriously by none.

At the third conference of parties to fccc (CoP-3) in 1997, countries met in Kyoto, Japan, to discuss more definite ghg reduction commitments. Under the resulting Kyoto Protocol, industrialised countries, listed in Annex B of the protocol, agreed to reduce their emissions in the 2008-2012 period by 5.2 per cent compared to 1990 levels.

But the protocol also allows three 'flexibility mechanisms', or 'flexmex', which allow industralised countries to meet their Kyoto targets without any domestic ghg reductions. These include the clean development mechanism ( cdm - project-based emissions trading between industrialised and developing countries), joint implementation (project-based trading between Annex B countries), and emissions trading (trading of excess emission allowances between industrialised countries). Details will be discussed in The Hague in November 2000.
Eager to preserve the resource-intensive American way of life and the economic interests of its industry, the us Senate has refused to come aboard the Kyoto Protocol unless 'key' developing countries agree to reduce ghg emissions.

Developing countries see this as a way of freezing global inequity. All nations have an equal right to the absorptive capacity of the atmosphere, a global common. Industrialised countries have already used up more than their share, having embarked on the path to development long before developing countries. Developing countries want clear entitlements based on per capita emissions of ghg s before any emissions trading is allowed under the North-South mechanism, the cdm .

Problem
The build-up of 'greenhouse gases' (GHGs) - carbon dioxide, methane, nitrous oxide and chlorofluorocarbons (CFCs) - due to human activities traps the Sun's rays in the atmosphere and heats up the Earth like a greenhouse.

Of all the GHGs, carbon dioxide is responsible for over half the enhancement of the greenhouse effect. Carbon dioxide emissions, caused during the burning of fossil fuels, are directly linked to individual lifestyles. The higher an individual's dependence on fossil fuels, the higher the per capita emissions.

If GHG concentrations continue to rise at present levels,

lsea level will rise by 9-29 cm by 2030. Millions living in small island states and low-lying deltas in Bangladesh, China and Egypt will be rendered homeless

lthere will be severe incidents of drought and floods, loss of biological diversity, reduced crop yields and spread of diseases to regions where they are not currently known to exist.

Developing countries, with less ability to adapt, are twice as vulnerable to these adverse effects than industrialised countries, while small island states are three times more vulnerable.