Caught in a haze 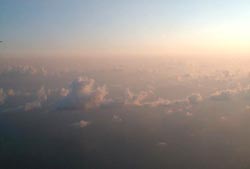 The storm set off by the United Nations Environment Programme (unep) report on the "Asian brown cloud" is yet to subside, with its authors and critics sticking to their guns. The moot point is the influence of particulate pollution over South Asia on the global and regional weather systems (see: "Aerial raid", Down To Earth, Vol 11, No 6, August 15, 2002).

The report, which was released in August 2002, pointed out that pollutants and particles (aerosols) from biomass burning and industrial emissions had formed a three-kilometre-thick brownish layer over many regions in Asia. It proceeded to draw a direct link between this pollution build-up and disruption in rainfall and wind patterns. A 10 per cent reduction in solar energy reaching the region's oceans is causing a corresponding decrease in the evaporation of moisture that controls summer rainfall, it observed. A decreased agricultural output and respiratory diseases too were attributed to the phenomenon.

A flurry of activity spawned the release of the document. The Indian government slammed the unep report and constituted a high-level committee of scientists to check the veracity of its findings. The September 10 issue of the prestigious Current Science journal too came out with a hard-hitting editorial and a rejoinder from a team of atmospheric scientists of the Indian Institute of Science (iisc), Bangalore.

J Srinivasan and Sulochana Gadgil of iisc contended in their article that it was inappropriate to describe the wintertime haze over Asia as "brown cloud", as the term cloud has a different meaning in meteorological parlance. While a cloud is a visible collection of minute particulate matter comprising water droplets and ice crystals, haze refers to suspended fine dust or smoke particles in the air and is invisible to the naked eye. They castigated the unep scientists for portraying the haze as a permanent feature, though it only occurs in the region for just three winter months from January onwards. But though the unep report mentioned the word "cloud" in the title of the paper, in the rest of the text it is referred as haze.

The panel formed by the Union government is headed by Indian Meteorological Department (imd) director general R R Kelkar. It will submit its report within the next six months. Its members allege that the objective of the study seems to be more political than scientific in nature. Perhaps the idea is to equate aerosols with greenhouse gases as a cause of climate change, says a committee member. While unep scientists averred that man-made aerosols constituted almost 75 per cent of aerosol concentration during observation period, iisc scientists argue that the level of natural aerosols in the atmosphere is generally three to four times that of the aerosols released due to human activities. Aerosols are minute particles that escape into the atmosphere. They are both natural and human-made. While sea salts and mineral dust are naturally occurring aerosols, particles such as black carbon, nitrates, sulphates and fly ash are anthropogenic in origin.

The unep report was based on an Indian Ocean Experiment (indoex) conducted between 1995 and 1999 by a team of 200 scientists. The group was led by Nobel laureate Paul Crutzen, V Ramanathan of Scripps Institution of Oceanography in the us and Indian scientist A P Mitra. Incidentally, Mitra and D Sikka, another scientist in the unep panel, are also in the Kelkar committee.

Experts in the government panel feel that the time period used for observation and data collection on aerosols was too short to reach a definite conclusion. While unep scientists say that the observations were made from 1996 to 1999, iisc experts state that the intensity of the haze was extreme in 1999 when the indoex experiment was carried out. This was on account of an unusual atmospheric circulation, which could have led to a wrong interpretation.

But Crutzen, Ramanathan, Mitra and Sikka stand by their findings. In their reply, which appeared in the October 25 issue of Current Science, they have blamed a press release issued with the report for the confusion. According to them, the release did not reflect the uncertainty of the phenomenon nor did it carry the note of caution that the report contained. This, they say, led to the media sensationalising the findings. Even a unep spokesperson admitted that much more sensitivity should have been shown while drafting the report.