The killer quake struck unexpectedli in the still of the night. Entire villages were flattened and thousands perished. Though rescue and relief were prompt, they were uncoordinated. And, several … 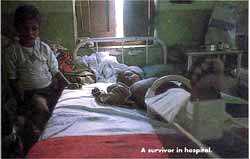 AT MIDNIGHT on September 29-30, Gulab Jawalge and his family went to bed, exhausted by the prolonged Ganesh Puja celebrations in their village, Mangrool, in Maharashtra. Less than four hours later, Jawalge found himself trapped in a pile of rubble that his house had become. When he extricated himself half-an-hour later, there was no sign of his wife or three children. Only at daybreak did he realise they had been buried under the debris. The temple behind his house -- where about 100 people had slept because they were too weary to return home -- had collapsed and a bewildered Jawalge could not see a single house standing nearby.

Only when army doctors treated him, did Jawalge realise that an earthquake had brought down like ninepins the heavy boulder-and-mud houses in his village. Of the 500 villagers, 400 were buried alive. Even 60 hours later, army officers conceded that several people were still trapped by the debris and the bodies had decomposed too badly to be taken out.

Mangrool, about 20 km from Latur in Maharashtra, appeared as though several bulldozers had run amok there. But this was no exception. The earthquake that had rocked 72 villages with a population of 150,000 had taken a heavy toll. About 40 villages in Latur and Osmanabad districts had been devastated. The actual number of casualties will never be known because, despite official claims, several people were left under the debris.

By all accounts, the state machinery in Bombay responded quickly to the disaster. Within two hours, the police had informed chief secretary N Raghunathan and chief minister Sharad Pawar. Pawar took off immediately for Latur with two ministers to supervise relief operations and Raghunathan began despatching rescue teams. The army was called in and the Union government set up a crisis management group. The first plane-load of doctors and equipment from Delhi arrived the same day.

However, little relief reached those it was intended for until the army moved in. The first troops reached only on the afternoon of September 30. In most villages, relief operations began only much later because the troops had to come in from as far as Ahmadnagar and Secunderabad.


Though the first medical teams reached the area within four hours, they were too few and their resources too limited even to provide first aid in the 40 devastated villages. Accessible villages were the first to get relief. For instance, a medical team reached Killari -- the first village off the Latur-Omega road -- by 7 am. However, victims in Mangrool, which is in the interior, had to wait till the afternoon.

However, searching the rubble for people was a job for the army. But police and other volunteers did not have even basic equipment to clear the rubble. Said an irked army officer in Mangrool, "Civilian rescue teams scurried all over, while the police lurked around with sticks. We were the first to start clearing the tonnes of rubble." But even army soldiers were short of spades and shovels.

Rescue work was hampered also because few villagers were in a state to identify sites where people might have been trapped. "Without such assistance, looking for survivors was like looking for a needle in a haystack," said Lt Col Arvind Mahajan, overseeing relief operations in Sastur village of Osmanabad district.

Though more than 50,000 rescue workers were in the area, blind searches with primitive equipment led to many corpses not being recovered even 72 hours after the quake. Corpses had decomposed and had to be cremated where they were found.

Cooperation from the locals would have made a big difference, argues an army officer supervising relief work at Peth Sanghvi in Osmanabad who had requested in vain for locals to allow him to bring down the remnants of a temple that was obstructing an excavator. Says Mahajan, "This kind of thing is best handled by neighbours. The villagers will listen to those they know. But there is little neighbourhood cooperation."

Besides, thousands of people thronged the villages to see for themselves the extent of damage reported. As a result, from the second day itself, crowd control became a major task for the police and the army.


Lack of coordination hindered delivery of relief material. A doctor at Latur hospital said just two days after the quake, some patients got only an orange each, though "a lot of cooked food in various relief centres was rotting". Though Osmanabad district magistrate Anil Pawar claimed there was "absolutely no dearth of supplies", a soldier in charge of a relief camp for Mangrool refugees complained they and not received even a packet of biscuits for more than 24 hours and requested journalists to urgently arrange food for "at least the women and children". Besides, there seemed to be no assessment of daily requirements for affected villages and refugee camps.

This anomalous situation resulted from the total dependence of relief deliveries on the police and the army, both of whom had little feedback on village-level situations. In Nandurga, about 10 km from Killari, though health care was being handled by army doctors, three teams of voluntary doctors arrived.

Sudden rains and dropping temperatures soon after the earthquake also put the homeless survivors to further torture and added pressure on volunteers trying to provide shelter. "This (providing shelter) is something people from nearby villages can do easily," pointed out Chandulal, a doctor at a voluntary relief camp. Just a handful of people are required to erect shelters using tin sheets. This would drastically reduce the chances of diseases spreading, he added. In the absence of such initiatives, the army came under increasing pressure to stop disposing of bodies still in the debris. Simultaneously, rapidly decomposing bodies began to pose a health hazard.


Meanwhile, survivors came alive to their problems. "I have survived the earthquake, but I will be dead soon if my cattle die either of cold or starvation," said a woman in Mangrool. However, cattle were not a priority for the administration. Said Anil Pawar, "Our priority is humans. It is not possible for us to attend to cattle now."

The rains also made farmers eager to sow rabi crops. "The area has been drought-hit for the past two years and now there is a chance for a decent rabi crop," said Govind Gaikwad at Nandurga. However, hardly any farmer was left with seeds and many of them lost their cattle, he added. Stored seeds began rotting in the rain.

The provision of seeds in time for sowing is not a priority for the government or relief agencies. For them, houses that can withstand earthquakes are more important. Few villagers take the government's claim of providing "safe housing" seriously, and still fewer believe the government will compensate them for lost cattle or help a traumatised peasantry get on with the sowing of the rabi crop. Babu Vishwanath Manale, the first graduate in Mangrool, said: "Our own people can help us. Let us see if they do."

So far, however, the signs from their "own people" are not very positive.