Evolving into the danger zone

The Earth's atmosphere has been evolving ever since the planet was formed about 4.5 billion years ago. But, with industrialisation, human activity, for the first time, threatens irreversible … 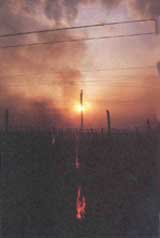 Human-induced changes in the composition of the atmosphere has lent urgency to the task of understanding their effect on the earth's climate, which is crucial to life on the planet.

Atmospheric concentration of carbon dioxide, a greenhouse gas found in abundance on earth, has increased by more than 25 per cent since 1800 because of the rapid pace of industrialisation. Says Jeremy Leggett, scientific director of the international environmental organisation, Greenpeace, "The Earth is heading for an increase in global average temperatures, unprecedented in human history." This concern is echoed by numerous scientists all over the world. In addition, the ozone layer, which shields living things from the Sun's ultraviolet rays, is getting thinner, a process that industrial chemicals called chlorofluorocarbons (CFCs) have accelerated.

These changes have lent urgency to the task of understanding the intricate relationship between atmosphere and climate. In 1896, Swedish chemist Svante August Arrhenius explained the ice ages by correlating temperature changes on the Earth's surface with changes in atmospheric carbon dioxide. And in 1903, he observed that increased carbon dioxide emissions by industrial processes would raise the global average temperatures. Today, it is possible to understand not only how the atmosphere and climate have evolved during the Earth's history, but also to predict their behaviour to some extent.
During the formation of our solar system from a cosmic gas cloud about 4.6 billion years ago, large amounts of gas became trapped in the Earth's crust. Subsequently, the gas escaped to the surface through openings in the crust, such as volcanoes and vents in the ocean floors. This "outgassing" is considered the dominant process in the formation of the Earth's atmosphere.

Erosion by meteor impacts is also believed to have been an important factor. "A study of the craters on the Moon's surface indicates that a significant number of large meteors, 100 km or more in diameter, continued to hit the Earth-Moon system until at least 3.8 billion years ago," says James Kasting, a geoscientist at Pennsylvania State University in the US. He says the meteors could have brought in large amounts of water, besides carbon monoxide and nitrous oxide.

In the early atmosphere, scientists assert, oxygen was virtually absent and the level of carbon dioxide was about 100 times higher than now. The high carbon dioxide concentration helped retain the Sun's heat because of which, say scientists, the average temperature of the Earth's surface then would have been as high as 85 degrees Celsius.

US geologist P E Cloud was the first to make a systematic study of the time-scale over which the level of oxygen in the atmosphere increased. Cloud observed that underground deposits of oxidised minerals, called redbeds, were absent before about two billion years ago, indicating it was about this time that atmospheric levels of oxygen became appreciable.

Further evidence came from analysing river sediments containing pyrite and uraninite, minerals of iron and uranium respectively, which are chemically attacked by oxygen and are stable only in its absence. Cloud found most known deposits of these minerals were formed more than two billion years ago.

After this point, oxygen levels in the atmosphere increased steadily, rising from about one-tenth of present levels 0.7 billion years ago to the present level, which was first achieved about 0.4 billion years ago, driven by a widespread increase in the number of land plants during that period. The atmosphere thus not only enabled life to originate, but was also influenced by it.

Another factor that could have affected the level of oxygen was the formation of the ozone layer. Ultraviolet radiation from the Sun splits oxygen molecules into atoms that recombine to form ozone. The ozone, therefore, serves as a shield that blocks ultraviolet rays from reaching the Earth's surface, until an equilibrium between the amount of oxygen and ozone is reached.

Most of the atmospheric ozone now is found between 20 and 50 km above the Earth's surface. In the 1970s, it was realised that CFCs increase the rate at which ozone is broken down. Observations indicate also that between 1969 and 1986, the level of ozone declined by 2 per cent.
The amount of ozone above the Antarctic has decreased by nearly 40 per cent since 1957, with most of the increase in CFCs occurring since the mid-1970s. This discovery has sparked off efforts to limit the use of CFCs and replace them by the turn of the century with chemicals that do not affect ozone levels. As a result, measures are now being taken to phase out production of these chemicals by 2000. The level of carbon dioxide in the atmosphere is increasing by 0.5 per cent every year, as a result of the burning of fossil fuels and large-scale deforestation.

Other greenhouse gases such as methane and nitrous oxide have also been steadily increasing since the 19th century because of industrialisation. The present concentrations in the atmosphere of these two gases are much lower than that of carbon dioxide. However, their efficiency as greenhouse gases, molecule for molecule, is much higher than that of carbon dioxide -- 20 times more for methane and 200 times more for nitrous oxide. That is why scientists and environmental groups around the world are lobbying for adoption of measures curtailing emissions of greenhouse gases.

Much of the present concern follows the findings of the Intergovernmental Panel on Climate Change (IPCC), a body of about 300 scientists from more than 20 countries set up by the UN general assembly. In a 1990 report, the IPCC concluded: "We are certain that emissions resulting from human activities are substantially increasing the atmospheric concentration of greenhouse gases. These increases will enhance the greenhouse effect resulting on average in an additional warming of the Earth's surface."

The exact amount of global warming that will result and over what period, depends on, besides concentration of carbon dioxide, factors such as changes in the atmospheric content of water vapour (itself a greenhouse gas), changes in cloud cover and changes in the Earth's surface reflectivity caused by variations in the distribution of snow and vegetation.


To learn about the net global response of the atmosphere to a given climate change in the past, scientists study records present in fossils and rocks of climatic changes and atmospheric gases. The advantage of using records is that all relevant factors have been taken into account by nature. James Kasting, a geoscientist at Pennsylvania State University, says, "We'd all like to place constraints on future global warming by using the palaeoclimate record." (See box)

Such studies provide further evidence for the crucial role played by carbon dioxide, the most abundant greenhouse gas, in climate change. For example, studies show at the peak of the last ice age, 18,000 years ago, carbon dioxide levels were about 30 per cent lower than today. During warm periods, such as the Cretaceous, between 140 and 65 million years ago, the amount of carbon dioxide was much higher.


Of the available atmospheric records, the most complete is the one obtained from air bubbles trapped in polar ice. Ice cores removed from various depths in Greenland and Antarctica are dated from radioactive isotopes present in them. Air bubbles trapped in the ice are released by crushing the ice samples in vacuum. Measurements of the carbon dioxide concentration in the air thus collected provides information about the atmosphere's composition at the time the ice was formed.

The ice record has enabled scientists to reconstruct atmospheric changes over 200,000 years and revealed that the carbon dioxide content of the air follows the temperature almost in step (See figure).

By studying how past climates responded to changes in the amount of carbon dioxide, scientists hope to determine the sensitivity of the Earth's temperature to carbon dioxide concentration. This would enable them to estimate future global warming simply by using the recorded increase in atmospheric carbon dioxide. "If you really could make the carbon dioxide record quantitative, it could be very important," says Kasting.


One measure of the climate's dependence on carbon dioxide is the rise in global temperature associated with a doubling of carbon dioxide levels. This parameter, called climate sensitivity, is crucially important for estimating future global warming.

Existing climate models estimate this rise in global temperature to be between 1.5C and 4.5C. The uncertainty arises from a lack of knowledge about the effect of other factors such as cloud cover and the Earth's reflectivity.

Two scientists at the New York University, Martin Hoffert and Curt Covey, have come up with a new estimate of climate sensitivity. By analysing palaeoclimatic data, including the distribution of fossils in deep-sea sediment and their isotopic composition, they have obtained a value of 2.3C, plus or minus 0.9 degrees.

However, this estimate also contains uncertainties and many groups are working to make this number more precise. As their efforts continue, they are likely to yield more insight into the Earth's atmosphere.