Experimental protests in the lab

FOR the scientists working with the Council of Scientific and Industrial Research (CSIR), India's premier research and development organisation, August was a month of discontent, unionism in labcoats. From August 22 to 26, CSIR's scientists observed a symbolic protest week by wearing black badges to push their demands, mainly concerning promotions, salaries, benefits and service conditions.

The CSIR Scientific Workers' Association (SWA) has set an October 15 deadline for the management to accept its demands, failing which, says the SWA's general secretary B V Reddi, "We may have to take to the streets."

The stir is the result of years of festering frustration due to stagnation within the organisation, low salaries and malpractices like favouritism. A 1993 report by the Delhi-based National Institute of Science, Technology and Development Studies (NISTADS) on scientists in the country found that 55 per cent of the respondents believed that promotions were based on favouritism. Says Dinesh Abrol, a scientist with NISTADS and a former SWA president, "There is a strong feeling of resentment among the scientists."

The decision to hold the agitation was taken at the SWA's central executive meeting at Mysore's Central Food Technological Research Institute on July 15-16, where a charter of 56 demands was rousingly adopted.
The butt of the agitation is the Merit and Normal Assessment Scheme (MANAS), which was introduced in 1990. MANAS was initially welcomed by the SWA because it allowed for meritorious workers to be promoted after 3 or 4 years as compared to the earlier 5. Under MANAS, out of 100 points overall, 30 depended on the Annual Performance Appraisal Report (APAR), 30 on a referee system or peer review, and 40 on an interview. The APAR is considered the foremost criterion for selection for promotion.

The APAR was supposed to be based on mutually-agreed work targets, and evaluation of work at the end of the year. However, says Reddi, "It was mandatory that task assignment be given to scientists at the beginning of the year. But this aspect has been totally violated by all laboratories. If one has good rapport with one's immediate superior, then better grades can be realised."

This lacuna generated a lot of ill will and the SWA is now demanding that interviews be conducted for each scientific worker after 3 years, independent of the APAR.

As for the peer review, even CSIR director general S K Joshi admits that it is flawed: "The system may not be good for comparing people, because there may be disparities as the report may go to very lenient or very tough referees." Finally, about the interview, the SWA has demanded that to eliminate favouritism, more openness be infused into the system by recording the proceedings. Says Abrol, "We did seek the merit system, but it should not be built upon subjective criteria or be non-transparent."
The scheme was reviewed by a committee that was formed in 1991, and included SWA representatives, but its recommendations were largely rejected by the CSIR governing body, says Abrol. Now, the CSIR has drafted a new policy that it plans to introduce later this year. But, says Joshi, "Basically, there's more systematisation. The old framework remains with minor changes." Proposed changes such as an increase in threshold marks for selection, and withdrawal of bonus marks allotted by a director, and for additional experience, have drawn flak from the SWA.

Linked to the promotions is the issue of salaries. At present, among the Group IV scientists, there are 7 categories ranging from B (Rs 2,200 per month) to H (the director level at Rs 5,900-7,300). The SWA has called for more attractive remuneration packages, and, for once, it apparently has the support of the CSIR management. A 3-member committee chaired by Pune-based National Chemical Laboratory director R A Mashelkar was constituted in August to appraise the pay structure and submit its report in September.

Says G P Phondke, a member of the Mashelkar committee, "The CSIR has suffered in the respect of fresh recruitment during the last 6-7 years. It continues to suffer." Staff has decreased from 28,000 in the mid-'80s to the present level of about 23,000.

A major reason for this is that emoluments, benefits and service conditions are not attractive enough to draw in the cream of the scientific community. Explains the CSIR's adviser (planning) S D Garg, "At the entry level (Scientist B, C, E1, E2), there is no difference (between college teachers and scientists), as our scales conform to those in the universities up to lecturer, reader, associate professor levels. But while at the professor-level, academics are automatically at the Rs 4,500-7,300 bracket, here they have to climb through scientist F, G and H to reach the Rs 7,300 level."

Attempts at rectifying the situation are being made: the Mashelkar Committee is an instance. In fact, another committee headed by Mashelkar presented a report that was accepted earlier this year, wherein there is more emphasis on sharing of intellectual fees or royalties by scientists. The ceiling of Rs 50,000 per year in this regard has been increased to Rs 1 lakh. A major demand of the SWA is limiting the tenure of the directors of CSIR's 41 laboratories to 6 years, and appointing them from within the CSIR family. In fact, most laboratory-specific incidents have evolved from local SWAs' opposition to the directors. The most recent example of such an incident involves the Nagpur-based National Environmental Engineering Research Institute (NEERI), whose director is P Khanna.

The NEERISWA had consistently opposed the recruitment of a senior scientist who they felt was overage for the post in question, and had a history of leaving and returning to the institute. The NEERISWA threatened disruption of the interview for the candidate, which was scheduled for August 10. On August 6, Khanna suspended 11 NEERISWA members, leading to a virtual uproar. Although the suspension was subsequently rescinded, the schism continues. Reddi describes Khanna's action as "arbitrary". Khanna, when contacted by Down To Earth, refused to comment on the incident. But Joshi supports Khanna, "It is a signal that he will not tolerate nonsense."

In other such incidents, interviews wherein 'favouritism' was feared by the local SWA were cancelled, such as those at the Regional Research laboratory, Jammu, in January.

On the issue of whether directors should be recruited from within CSIR, the SWA and the management differ. At the moment, only about 30 per cent of the directors' posts are occupied by scientists from within CSIR. Joshi asserts that bringing in people from outside with management experience helps provide new direction to research. Joshi himself joined CSIR's Delhi-based National Physical Laboratory as director, after having been a professor of physics at the University of Roorkee. But Reddi maintains that if directors were appointed from among the CSIR staff, it would serve to motivate the scientists to work harder.


The SWA was established in 1969 and registered soon after as a trade union, but veteran activists such as Abrol feel that it is still struggling for its rights. Says Abrol, "It is not fully recognised within the system, and not formally invited for discussions." While, along with the CSIR Federation, it claims the support of all 23,000 CSIR employees, in reality there are sharp divisions. For instance, there is little support among the senior scientists. Says Abrol, "Many people feel they are officers, not unionists."

And although SWA claimed the support of 22,000 employees spread over 40 laboratories during the week of protest, a prominent SWA members says, "There are only 32 regular functioning units of SWA and the active membership is not over 9,000."

A SWA grouse is that scientists are not participants in the planning process. One of the major SWA demands now is: at least 2 SWA representatives on each committee or panel at the laboratory or central level. Joshi counters, "I do not feel scientists should have the same kind of unions as factories."

But the SWA with its Left-leaning ideology, has managed the support of Leftist members of parliament. Following the agitation, in fact, a letter was sent to Prime Minister Narasimha Rao by MPs Rupchand Pal, Hannan Mollah, Malini Bhattacharya, Ram Chandra Dome, Haradhan Roy and Zainal Abedin, in which they called to his attention, "... the demand for rectification of the defective promotional practices and provision of necessary funds for ongoing projects and maintenance of existing facilities and modernisation of recruitment of new hands wherever necessary".

The CSIR has been forced to undertake staff cuts of 10 per cent courtesy a 1993 government order. Recruitments have been limited: in the Group IV scientists category, following retirements, only about 20 per cent of vacancies are filled, according to Garg. The SWA is adamant research institutions such as the CSIR should not be paralysed under the umbrella of cutbacks.

But while the CSIR employees' unrest takes centrestage, the organisation itself is facing tremendous pressures due to a budgetary crunch and falling recruitment levels. Plus, in actual terms, the CSIR has been hamstrung by falling budgetary support. While the increase in CSIR's budgetary allocations every year is about 10 per cent, Garg says taking into consideration factors such as inflation, it is actually "in the negative". Says Garg, "We are now emphasising on dedicated sponsored programmes, where user industries are committed". Through this channel, the cash flow in 1993-94 was Rs 94 crore, and for 1994-95 is expected to touch Rs 105 crore.

But the cash crunch has had its effect. The SWA has complained about falling standards due to lack of new equipment and facilities. Garg agrees, "Our facilities are getting obsolete because support for R&D is getting reduced".A study conducted by the Delhi-based Centre for Technology Services in 1993 found that 70 per cent of Indian firms considered Indian laboratories like CSIR an unimportant source of technology.

With the cash crunch, projects, too, have suffered. While Joshi says there is more emphasis on priority areas now, a senior CSIR official says, "Some programmes have had to be dropped, excellent laboratories have suffered." Among them he points towards research in biotechnology, aeronautics and environmental engineering. Pressure on the labs has increased, while earlier they were expected to earn 33 per cent of their allocation, now it is 50 per cent.

The SWA feels little has been done to improve the organisation's lot. And October may just be the month of reckoning for the CSIR community. As Reddi says, "Frustration is mounting. It affects the scientific temper. It could lead to demoralisation and could boomerang on the CSIR." 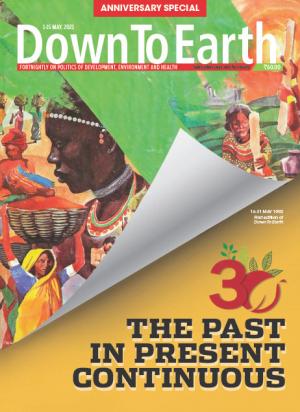