Agenda 21, formulated during the Rio Summit in June 1992, was touted as an earth-saving measure by the leaders of more than 100 participatory nations. Today, five years after Rio, the same … 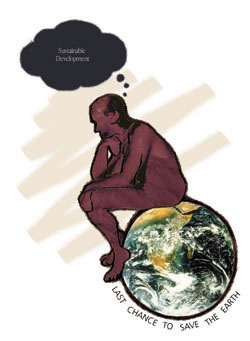 It was like the Tower of Babel. Environment ministers from all over the world and senior officials were talking at cross-purposes. The occasion: the fifth session of the Commission for Sustainable Development, held between April 5-25 in New York. The South mouthing rhetoric in favour of development and poverty eradication, the North promoting private sector funding for sustainable development. A situation which prompted many to ask the question: are we about to miss the last chance to save the earth?

When the Earth Summit had been held five years ago in Rio De Janeiro, the world had great expectations.

But at the meeting of the Commission on Sustainable Development held in New York in April 1997, which was supposed to serve as a preparatory meeting for the special session of the General Assembly to be held between June 23-27 this year, to discuss the governments' performance in the five years after Rio (Rio+5) and set the guidelines for a document which could be endorsed by the heads of state meeting in June, environment ministers and government officials of different countries virtually agreed to disagree upon everything previously agreed upon.

Nothing materialised as far as the guidelines for the document were concerned.

Tanzania's UN ambassador, Daudi N Mawakawago, who is also chairperson of the Group of 77 (G-77) - an association of 132 developing countries - while talking to newspersons summed up the dilemma by stating, "At Rio, we had very protracted negotiations, and at the end of the day we agreed on certain commitments Now five years on, we are asking, were those commitments genuine?"

The key concerns of the South today are economic growth, social issues, an attack on poverty and transfer of technology. There was also a feeling among the Southern nations that the Rio bargain had turned out to be a lopsided affair. The Earth Summit in Rio, in the first instance, was the outcome of an unwilling partnership where the South had gone in to attend a Northern dictated summit to sign three treaties on biodiversity conservation, prevention of global warming and conservation of forests.

Even in these areas there was very little progress in the years following Rio. There was very little action to set binding targets for lowering greenhouse gas emissions of the developed North; the biodiversity convention, established to safeguard the world's threatened biodiversity, remains unsigned by the US, the world's largest user of biodiversity resources and knowledge; and Agenda 21 - the global action plan for environment, has gone largely unfunded.

Although the Agenda called upon developed countries to increase their aid to the South, the aid has in fact declined. As a result, the South has charged that the North has reneged on its promise to help it attain sustainability. Meanwhile, the political leadership of the North, including the 'green' US president Bill Clinton, failed in providing any direction to develop a consensus on a viable global plan of action to promote economic growth while reducing the negative impact on the environment.

The North also remained non-committal about paying for the environmental damage across national borders caused by greenhouse gas emissions or through international trade. It also showed its inability to transfer technology on concessional terms to the South to help it promote eco-friendly economic growth. The lack of funding also stuck out like a sore thumb. Although many developed countries, led by the US stressed upon the need for a greater role of the private sector in providing the funds for sustainable development, many delegates from both the North and the South agreed that the private sector was unlikely to commit capital into countries that need it the most.

Derek Osborn, co-chairperson of the intersessional Working Group of the United Nations Commisssion for Sustainable Development, summing up the core of CSD's work stated, "We have to face up to the fact that, on the ground, progress is in truth, limited and on many matters, things are still going in the wrong direction. In the poorest countries, development of any kind has been very limited, and the kind of environmental degradation associated with poverty has continued to spread in a number of places.

" "In one sense progress has been made at this CSD. There has been movement away from environmental conservation as at Rio, to sustainable development. Issues like sustainable tourism have been discussed here and not protection of coastal areas for example," remarked Under Secretary-General at the UN headquarters, responsible for social and economic departments, Nitin Desai.

This sounded like an attempt to find some saving grace somewhere. Moreover, this view was not shared by everybody; as Nanditha Iyer from the Indian delegation, a fellow countrywoman of Desai, said, "I do not see the inclusion of our economic agenda here."

All efforts were made by the South to include the consideration of environmental impact of international trade but demands for increasing terms of trade competitiveness of developing countries was opposed by the rich nations.

In view of their serious failure in implementing their side of the bargain made at Rio on increased financial resources to developing countries. The industrialised countries attempted to take the way out by pointing out the increase in foreign direct investment in developing countries through their private sector.

us, supported by several European countries, then closed all discussion on the issue of official aid by insisting that implementation of Agenda 21 is the primary responsibility of developing countries and they better look for finance internally . This issue of finance, more than any other issue, led to a complete stalemate at New York. "Emphasis on private capital flows is a fallacious argument, since very little of such flows was going to the countries that needed them most," said Msuya Waldi Mangachi, Tanzanian minister and chair of the G-77 countries. The final text agreed notes that financing for implementation of Agenda 21 will come from countries' own public and private sectors which could include macroeconomic reforms and review of subsidies.

This now brings the G-77 closer to accepting the narrowly focused Global Environmental Facility (GEF) as the major multilateral funding body for receiving aid on environmental issues in future. As the date for pledging of money to the GEF for next three years comes closer (January '98), the governments of the industrialised countries want a commitment by developing countries to accept GEF as the permanent mechanism on global environmental issues to close future demands of any new funds. Developing countries refused to support this demand keeping it as a bargaining point for future concessions.

Sensing the increasing frustration of the developing countries over the closing of doors on the issue of funding poverty eradication, The European Union (EU) announced three programmes primarily focused on technological aspects rather than changing the conditions which lead to poverty and environmental degradation. These proposals were on consumption and production patterns, freshwater and energy. However, the proposals contained no commitment to money though hints of 'new' money coming in future were given in the corridors.

With that the state of the agreed document to be signed by heads of the states in late June in New York, it is expected that few countries will take the opportunity to announce unilateral initiatives if they come to New York at all. "I am really perplexed as to whether I should recommend to my Prime Minister to participate in the Earth Summit ii now, since it is not clear what he will do?" remarked a Dutch delegate.

A major reason for the impending failure at New York is the poor mechanism of democratic accountability at the global decision-making level. As a result, it is difficult to generate effective public pressure for action. Since most national governments do not give financial priority to solving global problems, the international decision-making process slows down to a stop, requiring almost 200 national governments to agree before any global action can be taken. What is urgently needed is a new approach to solving global problems of environment and development. National governments like India can push these if they are committed to the promotion of sustainable development globally.

It is becoming clear that unless reliable sources of global taxation are created, on which a significant consensus exists, all decisions will get bogged down by countries like the US which refuse implementation of unfavourable international commitments. Several fiscal proposals have been made to make the global economy environment-friendly. For example, all people on earth should have a clear entitlement to the atmosphere and be allowed to trade their unused shares. The ultimate fact of the matter is that Southern nations have become even worse after Rio. Begging for money and technology remains the constant refrain of developing countries without any proactive proposal on how the earth's benefits can be shared in a way that all survive and the shortchanging of the South's resources and its share of global resources comes to an end. While the rich want to protect their turf, the South only wants to carp.