How did it go wrong? 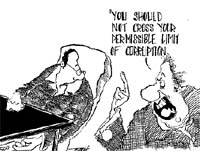 "Industrialists believe it is cheaper to purchase the regulators than abide by the regulations," says K Purushotham Reddy of the Hyderabad-based ngo Citizens Against Pollution. "If I am not wrong, more than 90 per cent of gpcb officials are corrupt. In the present circumstances, only God can save Gujarat from environmental disasters," says a cpcb official at Vadodara, adding that this is the reason why polluting industries are operating without a care for the environment.

While hearing a case against some h -acid manufacturing units that had polluted the groundwater of villages near Ratlam, Madhya Pradesh ( mp ), the mp High Court came down heavily on the state pollution control board ( spcb ): "The interpretation put by the board... shows the collusion of these officers. It was not expected of the mp Pollution Control Board to have pleaded like this. It leaves a strong suspicion that the pollution control board is not operating objectively. The chairman should change all the officers working in that area. We have strong reservation on their working objectively and fairly."

While all factories do not inject effluent directly into the ground, they love to break the rules. In Gujarat, several companies wait for heavy rains, when the production levels of most companies increase to a great extent. The reason is simple. "It becomes easy for them to dump their effluents and wastes anywhere they want. The effluents and wastes mix with the rainwater and nobody raises any objection," says a cpcb official at Vadodara who did not want to be named. If officials know this, what stops them from booking the polluters? "Undue pressures from the political circle," says the official, pointing out that in the past seven years, the board has not closed any industry in Gujarat for polluting the environment.

Though it is very difficult to get senior officials to speak openly about this, there is a growing realisation of this fact among them. Says a senior scientist of ppcb , "There are instances when some industrialists landed up in our office to complain that the board officials were demanding impossible amounts as bribe." "The extent of pollution problems in different states clearly indicates that pcb officials are either not willing to take action or they have connived with the polluters," says Rohit Prajapati. "There are wild allegations against the pcb officials, and the way they tackle an issue sometimes lends credence to such allegations," says M Mehta of cgwb , Chandigarh. I C Gupta, head of the natural resources and development division of the Central Arid Zone Research Institute, Jodhpur, who has studied groundwater pollution in Rajasthan, says, "Our state pcb is a dead body. Definitely, there is truth in the allegation that the board officials are getting monthly hafta (protection money) from the industries."

Says D K Dua of ppcb : "Whether our officials are corrupt or not it is to be confirmed, but as these officials are from the state public health engineering department on deputation, they are not really involved in their work. This definitely affects the functioning of the board."

Tishya Chatterjee of appcb concedes his inability in booking all the culprits. The board requires more power than what it has at present, he says. "All 25 state pcb s in India function as scapegoats for all concerned, being, by default, the state-level repositories of all knowledge, technologies, expertise and responsibilities," says Chatterjee. In the environmental management, government regulatory agencies are weak at the impact level and decision making is centralised. The victims of pollution have no say at the decision-making levels, he adds. However, R Rajamani, former secretary to mef , differs: "This is not a matter of lacking powers, it is a matter of will, which most pollution control board officials do not have."

So, does India need another Bhopal disaster, which affected 600,000 people in 1984, to wake up the slumbering bureaucracy? It is quite clear that pcb s have failed. Even if disaster strikes, their reaction is nothing beyond knee-jerk reactions like imposing a ban. Hence the onus of saving the country's groundwater resources rests in the hands of the people of the country and the civil society. It is time for the victims to become proactive.

The reason why local people and civil society can succeed where pcb s have failed is that they are stakeholders in groundwater resources. "It is not the pcb s who are really affected by groundwater pollution but the people of that particular region. So, the most effective strategy would be to let the local people and the civil society play a more active role in prevention of pollution," says Rajat Banerji, researcher at the New Delhi-based Centre for Science and Environment.

Shalu Puri, programme officer at Voluntary Health Association of India ( vhai ), Delhi, underscores the need for public pressure groups that can force industry to comply with environmental norms. "Today, no pollution control board can manage the problem unless the local people are for it. They have to take interest in protection of their environment and utilise the infrastructure provided by the government for sustainable development," she says. But the civil society can only be successful if the government ensures their right to information. "We will have to push for political lobbying in order to formulate acts so that the civil society can also be involved in pollution control measures," says Ravi Agarwal, director of Srishti, a Delhi-based ngo .


Prajapati points out that most of the industrial units in Gujarat are in rural areas where authorities cannot constantly keep vigil. He says people are gradually losing patience regarding increasing pollution levels. They are already keeping a close watch on illegal dumping of wastes in some industrial areas in Gujarat, which they are reporting to gpcb , Prajapati observes. For example, a few factories in Gorwa village of Vadodara district have been dumping effluents in a sewer. The local people organised themselves to catch the culprits. "They take photographs and collect other evidence and hand these over to gpcb. People are basically fed up with the approach of the industry and pcb s. So they want to take action on their own in order to control pollution. Such initiatives will prevent gpcb from making excuses," he says.

"In Western countries, the public boycotts products from an industry which is found to pollute the environment. In India, too, the civil society can not only pressurise the pcb s but also force industries to abide by environmental norms," says A K Saxena, director, environmental division, National Productivity Council, New Delhi. After the 20th amendment to the Indian Factories Act in 1987, the law makes it mandatory for every industry owner to pass on information to common people regarding the use of raw materials, types of pollutants coming out of the industry and dumping of effluents, among other things. And if any industrial unit does not comply with the norms, the owner can face a sentence of seven years of imprisonment under Section 92 of the Factories Act, 1948.

"But there is one problem with the civil society, too. At many places, people's groups and ngo s raise their voice against defaulting industries but withdraw later after taking money," says Sagar Dhara of M Venkatarangaiya Foundation in Secunderabad, Andhra Pradesh. In Patancheru, for instance, the local people raised objections during a public hearing against the setting up of an 18-megawatt power project, he notes. "But the sarpanch s withdrew their objections later. Such steps put the government and investigating agencies in a quandary," says Dhara. This aspect should also be considered before advocating the civil society's role in pollution control measures, Dhara emphasises.

But how do local people in industrial areas -- silent victims of pollution for years -- take up the task is the biggest challenge for the civil society. The voluntary and non-profit sector has to mobilise people to shed their fear and inhibitions. To convince them that their very future is at stake. To convince them that it is now or never. That without clean water, there is no agriculture, no prosperity, no life.

With Kazimuddin Ahmed from Bulandshahar.