How Karnataka manages its faeces

Thirty years after banning manual scavenging under the Night Soil Carrying System Abolition Act, Karnataka is still a fair way away from flushing it out of the system. On April 25, 2003, though, … 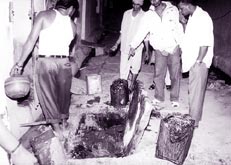 Thirty years after banning manual scavenging under the Night Soil Carrying System Abolition Act, Karnataka is still a fair way away from flushing it out of the system. On April 25, 2003, though, a minuscule step was taken in this direction when the Bangalore Mahanagara Palike (BMP) inaugurated a mobile mechanised suction machine to clean soak pits holding human excreta.

The device, also known as a septic tank machine, promises to give some succour to workers who currently carry out this activity by hand in about 1.5 lakh houses within the state capital as well as on its periphery. Soak pits exist in those largely residential localities of Bangalore where dry toilets are in use since there is no provision for underground drainage (UGD).

Once every few days, night soil workers -- the stigma attached to the job forces them to operate at night -- descend into the pits to physically remove human waste. Terming the working conditions unhygienic would be a gross understatement. Yet all that a group of four to five workers gets for doing this is a paltry Rs 400 per pit. B Venkatesh, a rehabilitated night soil worker, sums up the situation succinctly: "The task used to be so nauseating that we could not function unless we had downed a few drinks to numb our senses." Venkatesh is now a sanitation worker with Bangalore-based non-governmental organisation (NGO) Karnataka State Safai Karamchari Vedike (KSSKV), which is assisting the BMP in running the septic tank machine.

Night soil workers appeared as a blip on the municipal corporation's radar only about a year ago, when a local journalist highlighted their plight. "Our survey of some wards revealed that there might be approximately 250 manual cleaners in the city," claims Jayachandra Rao, chief health officer, BMP. Rao is, however, wide of the mark if KSSKV head Ashok Salappa is to be believed. "There are more than 10,000 such workers in and around Bangalore," he asserts.

Meanwhile, M N Vidyashankar, chairperson, Bangalore Water Supply and Sewerage Board (BWSSB), avers: "For a city like Bangalore, UGD is the ideal system." He reveals that a Rs 145-crore project is being implemented to expand the sewage network and cover the remaining areas. Salappa too extols UGD's virtues: "It will help bring manual work to a halt." But they seem to have failed to factor in the highly water-consumptive nature of such a system and the acute shortage of water that the city is reeling under. "Each time one flushes a toilet, it is water from Cauvery river that is going down the drain," alleges Rao. Vidyashankar retorts: "Treated water can be used for flushing and one can regulate its usage for the purpose."

Rainwater harvesting expert S Vishwanath, however, does not subscribe to the view. "Instead of installing expensive sewage treatment plants, there should be a move towards ecological sanitation," he opines. As regards this, the dry toilet concept fits the bill. Not only does it require less water, it enables resource recovery as well.

In this system, the toilet bowl contains separate apertures to carry faeces and urine. The latter needs no processing and can be used straightaway as a nitrogen-rich biofertiliser. Faecal matter, on the other hand, must be allowed to decompose before it can be utilised as a soil conditioner. It may be noted that the use of pit-cleaning machines can complement the paradigmatic reversion to dry toilets since it addresses sensitive issues linked with night soil cleaning. These include health risks, social equations and human dignity.

Vishwanath gives instances of other alternatives as well like the twin-leach system and decentralised wastewater treatment system (DEWATS). They treat and compost human waste and are not water guzzlers either. In the Ullalu Upanagara slum of Bangalore city, local NGO Gram Swaraj Samithi (GSS) is implementing DEWATS in collaboration with the Bremen Overseas Research and Development Association (BORDA)-- a German funding agency. This process involves the use of gaseous pressure and gravity to lead the effluents into the extension chamber. Waste and wastewater are treated in a biogas settler and an anaerobic baffil reactor, which stabilises the sludge that gets collected. The sludge can then be used directly in the fields as fertiliser.

The twin leach system entails construction of two pits. While liquids are allowed to seep out of the human waste, solids are stored in one of the pits till it is full. After this, it is closed for a year to enable anaerobic decomposition. In the meantime, the second pit is put to use and the process repeated.

Vidyashankar doubts the efficacy of these systems and wants to know where they have worked on a large scale. " He would be well-advised to study some of Japan's faecal management techniques or take the cue from environment-friendly dry toilets being used in parts of Europe.

With inputs from Ramya Vishwanath in Bangalore