Legacy of an empire

Encouraged by their ninth century benevolent rulers, Gond landlords and villagers had set up an intricate and immensely useful network of katas , traditional water harvesting structures. But … 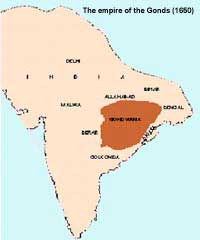 gondwanaland: supercontinent in geological history, of which India was a part. Gondwana ('Forest of the Gonds'): land of the Gond tribals and their powerful empire. A historic region which straddles the four states of Madhya Pradesh, Maharashtra, Andhra Pradesh and Orissa. And famed for its traditional water harvesting structures.

However, most of these systems are lying defunct and derelict today, as examples from western Orissa show. The 60-hectare (ha) Rani Sagar in Bijepur village of Sambalpur district is a case in point. Built by Gond zamindar (landlord) Damodar Gadotiya in 1821 to harvest rainwater for irrigation, this huge water body (locally known as a kata) is heavily silted and full of weeds today. Tulsi Prasad Gadatia, a former zamindar of Bijepur, claims the descendants of Damodar "had been responsible for the kata's repair and maintenance and the distribution of its water until the abolition of zamindari," after which the state-and its apathy-took over.

Katas are three-sided reservoirs, with one side kept open to recieve runoff water. Notes Nirmal Sengupta, a professor at the Madras Institute of Development Studies, "Unlike regular tanks, these are not dug out but consist of elevated embankments over the surface and thus facilitate gravity flow instead of requiring lifting for irrigation." Despite Bijepur's flat topography, the Gonds, known for their traditional wisdom in building katas by astutely judging the flow of rainwater, constructed a kilometre-long embankment with a catchment area of 200 ha; this catchment area stands reduced to less than half its original size today.

The zamindars, who doubled as village headpersons called gountias, built thousands of such katas and other types of water harvesting systems on lands gifted by Gond kings. Elaborate rules were formulated by gram sabhas - village councils - to govern these katas; gountias implemented the rules. Cattle were not allowed to enter the path leading to a kata during monsoons. About one ha of land around the edges of each kata was left untouched; side channels around the katas enabled the outflow of excess water, thus reducing waterlogging in the fields.

Also, systematic release of water provided timely irrigation to all fields situated in the kata's command area. "A kind of pani-panchayat (water council) was responsible for the proportional release of water. The land that grew 90-day paddy would get the water first, then the one with the 110-day variety and finally the land with 130-day paddy," says Gadatia.

Repair and maintenance work was normally done once in three or four years. "As there were good forests around the catchment area of the kata , the siltation was not heavy," recalls Gadatia. Also, the villagers grew palm, date, sal (Shorea robusta) and mahua (Madhuca indica) trees and grass around the kata, which held the soil and acted as barriers to the silt flowing with runoff water. The silt, called karpa, was dug out during summer and used as manure. The villagers gave a token amount-usually a rupee per cart of karpa-to the gountia for maintenance of the kata. In the event of a breach in the kata , the gountia called the entire village to work overnight on repairs.


A strong central administration and constructive role of village institutions had contributed to the success of these manifestations of Gond ingenuity. Writes Baden Powell in Land System of British India , "We have evidence that the Gonds had a strong central government, which they established over and in addition to the earlier organisation of the Kols which consisted of grouping the villages into unions...." The gountias were the dominant class of proprietors, responsible for the administration of the villages for specific periods according to a lease which was periodically revised. The system continued under the British, though a number of short-term settlements were made.

In Sambalpur and Boudh, the kings provided rent-free lands called Sagar Rakshya Jagir to Kodas, a class of experts in the excavation of katas . The villages of Sarangarh state followed a collective system of ownership of land and water resources called Lakhabata, which involved a periodic redistribution of land to eliminate inequality produced by fluvial action or by alternation in fertility. In Kalahandi, the gountia had to dig katas whenever a village was leased out to him. In Patna tenants were encouraged to dig tanks and develop other water sources with permission of authorities, and utilise the water free of rent during the period of settlement; the state had more than 3,000 tanks during the 1920s.

Relative autonomy of the villages and the positive role of village institutions also helped in the overall flowering of these system. Villages had control over their land and water resources, which was exercised through their panchayats or gram sabhas . The gram sabha discussed development work, conflict resolution, agricultural issues, problems of resource management and the livestock situation in the village. "The distribution of water was done in accordance to the percentage of land owned by individual cultivators and the labour was also organised the same way. It was fixed by the gram sabha ," says Bhavani Shankar Singh, a former zamindar of Jujumora village in Sambalpur. Jujumora's 20-ha kata, irrigating about 100 ha, was built by Kashi Nath Pradhan, Singh's great-grandfather, more than 100 years ago.


These practices have disappeared in most villages today. One village which still boasts of a community water distribution system is Loisingha in Balangir. The village had a 45-ha tank called Narayan Sagar-built by one Narayan Singh Rai about 150 years ago-with a command area of 300 ha; today, its area has shrunk to 30 ha, with only 200 ha as command area. "For an equitable distribution of water, we had formed a committee of all the cultivators. We would sit together every year to decide the distribution," says Jay Krishan Singh Rai, a descendent of Narayan Rai. The lands growing short-term paddy received water first, followed by others.

Since 1979, however, the state of the tank has progressively worsened owing to neglect. The reason is not far to find: The directorate of minor irrigation projects (mip) has taken over the water body's control and management and "except building sluice gates at wrong places that has obstructed the free flow of water into the low lands, it hasn't done anything", says Rai. This is despite the cultivators paying water tax to the directorate for the last seven years. Earlier, villagers had maintained the kata, their life-line, themselves. "We cannot do it ourselves now as we don't have enough finances to hire machinery and labour," says committee member Kodan-dadahra Biswal.

Similar stories of apathy abound. The state of the famous Ganga Sagar tank in the village of the same name, situated two kms from Pantograph, is another example. Built by Gond landlord Ganga Dharua during the 1920s, its initial 40-ha area has shrunk to 20 today. The tank used to irrigate an area of about 200 ha. Now, full of weeds and heavily silted, its potential has been reduced to one-third. "The block office is supposed to maintain it but actually nobody takes care of it," laments Kripa Singhu Pradhan, a former zamindar of the village.

The mip's heavy hand is visible in Bijepur as well. Having taken over Rani Sagar in 1959, the mip has been neglecting it since then. Gradually, the surrounding forests have disappeared as well, thanks to largescale illegal felling. The mip has reportedly sanctioned a grant of Rs 10 lakh, but nobody is certain if the money will improve the state of the kata. "Releasing money is one thing and putting it to proper use is another," scoffs Gadatia.


Considering the state of affairs, could one hope for a revival of these water harvesting structures? The answer is a conditional yes. Technical revival of the katas-through de-siltation and removal of weeds-is not a problem, argue experts. But the government apparently has no clear policy to deal with the issue. Its two departments-the directorate of mip , and that of soil and water conservation (swc)-are working at cross purposes. "Most katas belong to ex-zamindars as they were constructed by them. So we couldn't do much to repair or improve them," says G N Biswal, director, swc directorate. On the other hand, the mip claims to have repaired many katas under their jurisdiction. "Previously, gountias were maintaining katas. Now the government has taken over this responsibility. We have 4,785 projects in hand which have received a new thrust with help from the World Bank (wb) and the European Community," claims mip's Patnaik.

Clearly, the answers lie elsewhere. "We can do a lot with machines, but what is more important is the more fundamental things of life which the government cannot do," says Gadatia. These "fundamental things" are the revival of cooperation amongst villages, coupled with financial autonomy of village institutions.

Water Resources Consolidation Project , a document published by the state government , also accepts the truth behind the lack of farmers' participation in managing irrigation. The wb has suggested that "the distribution system at minor and sub-minor levels should be turned over to water users' associations in a phased manner". "We are going to ask farmers to form these associations and get them registered under the Societies Registration Act; these associations will then be responsible for the repair and maintenance of the traditional water harvesting systems," says Patnaik. On the basis of joint irrigation management (jim), these associations will receive 50 per cent of the water cess for ensuring financial independence.

Not many people, however, give much credit to the concept of jim." Katas should be exclusively in the hand of villagers," says Loisingha's Rai. Other suggestions are eviction of land-holders from catchment areas and reservoirs, stopping pisciculture and carrying on a massive afforestation drive in and around catchment areas. A tall order, indeed. But unless these steps are taken, the revival of these structures appears impossible.

Down To Earth will carry more on traditional water harvesting systems in its forthcoming issues. Readers are invited to send in their comments and contributions