For over 2 months now, the hills of Simlipal in Orissa have been inundated by fierce monsoon showers. Thick foliage dripping water on the undergrowth had turned the soil to slush, to be kneaded … 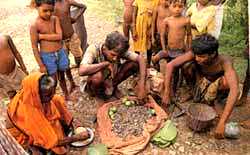 THE term "non-wood forest produce" covers all forest products except timber. It includes seeds,flowers, gums, resin, bamboo, lac and fruits. Earlier called "minor" forest produce, its importance to tribal communities and its capacity for providing a sustainable source of self-employment to forest dwellers has been heavily underestimated so far, with timber hogging the limelight as the "major" forest produce.

Yet, about one-third of the revenue collected by forest a department in India is from NWFP. In Orissa, where 22 per cent of the population is tribal, 13 per cent of the forest population depends,entirely on NWFP, while another 17 per cent depends on daily wage labour - mainly the collection of NWFP. For another 39 per cent, NWFP collection is a subsidiary occupation.

Despite these statistics, the Orissa government has granted a 10-year lease to a private limited company,Utkal Forest Products Pvt Ltd, for the collection of 29Nf WFP items in most regions of Orissa, leaving the tribals open to exploitation, and denying them their customary rights. The company uses some of the produce for manufacturing dyes and medicies, and markets the rest. As a result of the lease, even the forest department is powerless to monitor the amount Of NWFPS that the company collects, and how much they pay the tribals for the goods they buy from the haat.

"District forest officials (DFOS) complain that the employees of Utkal Forest Products never bother to inform anybody about how much produce they have collected," says additional chief conservator of forests (ACCF), Sharad Patra. "And since the forest departments are not informed where their depots are, they cannot check for themselves. The company does no even bother to provide the DFOS with a list of their agents."

As Santosh Mohanty from the Social Research and Development Council, an NGO based in Baripada, points out this effectively means that Utkal Forest Products pays the tribals as little as they want for the NWFP that they buy or them, and that the forests are open to overexploitation by the company.

Under the existing law, says Patra, an apex committee consisting of the revenue division officer, the ACCF, and the collector should be fixing the rates that the lease holders pay tribal, for collection of NWFP, while DFOs have to approve of the agents appointed by the leaseholder for collection in his area.

Forest officials who find themselves having to bow to the wishes of the company are equally indignant, and allege that that lease has been wrested out of political contacts.

"Normally, such blanket leases are only given to public sector companies," says a senior forest official, requesting anonymity. "But while applying for the lease, Utkal Forest products went into partnership with Industrial Promotion and Investment Corporation Ltd (IPICOL), a public sector company. They were granted a 2-year lease in September 1990, which was extended to 10 years in December the same year. Thereafter, Utkal Forest Products functions quite independently and has succeeded in sidelining IPICOL."

The lack of a comprehensive policy on NWFP collection rights, and the enormous powers vested with state and central governments in the management of forest produce may be blamed for the situation. While the provisions of the Forest Act of 1927 do nothing to encourage the use of NWFP as a swans of generating income among the tribals, the recently proposed legislation, the Conservation of Forests and Natural Ecosystems Act, only threatens to worsen the situation by laying down more stringent rules regarding forest produce collection.

Similarly, initial Five-Year Plans that took tribal development into account ignored the importance of NWFP to tribal economies, and concentrated on health and nutrition. Although the 8th Five-Year Plan recognised the importance of forests and suggested their development as part of the scheme for tribals, and the removal of middlemen to stop exploitation, little has been achieved in this direction.

In the past, conservation schemes like Project Tiger were implemented with mindless frenzy and national parks and protected areas declared, forest dwellers'rights to the forest were overlooked. "Ecodevelopment" schemes have only recently been launched by the government in a grudging recognition of their irrefutable dependence on the forest.


In Simlipal, the field director of Project Tiger, Bairagi Prusty, admits that a centrally- sponsored ecodevelopment scheme for the tribals was launched on a "limited scale" only in 1993. It has not yet really taken off because of the Rs 19 lakh granted by the central government, the state government has released only Rs 5 lakh. Prusty says that they are also waiting for funds for ecodevelopment from the Global Environment Facility. The initial budget, presented for Rs 20 crore by the state government has been slashed to 10 crore.

But paramount on the ecodevelopment project's list is the plantation of eucalyptus and acacia, providing energy saving devices like fuel efficient chulhas and solar cookers, and street lighting. The development of projects involving NWFP, the tribals' mainstay, figures nowhere. While Prusty does not deny the tribals' dependance on NWFP, he claims that "so far they have been lenient with the people and allowed them to collect NWFP for their own use". But NWFP collection is far too important for the tribals to be satisfied with just the dictorial largesse of forest officials - it is a right, not a concession.

The efforts of most tribal development organisations are concentrated towards weaning people away from the forests. The Integrated Tribal Development Agency in Baripada has a 3-pronged approach, aimed mostly at tribals with agricultural land. The land-based programme undertakes irrigation projects, sabai grass cultivation, horticulture, and land conservation. The loan linked scheme grants loans for tractors and pumps at a subsidy, while the human resource development programme sets up residential primary and high schools.

Although the irrigation programme contributes towards the economy of the tribals, who own land by allowing them 2 crops a year, it does little for the tribals who depend totally on the forest. The sabai grass cultivation programme is perhaps the only concession it makes towards the NWFP development. Sabai, which can easily be grown on wasteland, is used by the tribals to make rope and handicrafts, and also by the paper industry.

Development programmes by any agency involved in forest management or tribal welfare need to acknowledge the sustainable use of the NWFP as an important part of tribal economy. Afforestation programmes should include trees yielding NWFP - species which provide drugs, spices, oil, lactans, dyes or resin. Deforestation in many areas is already affecting NWFP collection - tribals living on the fringe have to go further into the forest and spend more time to collect the produce.

Besides collection, processing forest produce also holds potential for the employment tribals. Development schemes should offer training in skills related to processing, and set up small and cottage industries.

Some NGOS working around Simlipal have set up such units for processing NWFP. The Social Research and Development Council (SRDC) coordinates the attempts of 435 such local NGOs.

The Radho Multipurpose Cooperative society in Udala block, set up in 1990 by social activist Sudershan Singh, provides employment to women from villages on the fringe of Simlipal, making agarbattis out of bojo bark and bamboo sticks and extracting mahua oil from mahua seeds. The Bharatiya Gramanchala Unyayan Sanstha offers training in making sabai grass products.

Government policies related to the forests have seldom taken into account the fact that while a total hands-off policy will not work in a country with land and population pressures like India's ,the resources of the forest can be sustainably managed, and, with foresight and advanced planning, renewed. The emphasis needs to shift to planned use and regeneration instead of total protectionism.