Making the most of little plots of land

Home |
Indepth
| Making the most of little plots of land 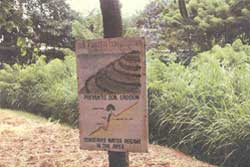 SMALL is beautiful, but not always sufficient - and this is the shortcoming that a new Filipino farming technique seeks to tackle, This method, called conservation. farming, uses the natural forest as its model but makes traditional practices more scientific and systematic and does away with costly and possibly damaging pesticides and fertilisers.

. Conservation farming is specially relevant to India because out of its 88.5 million landholdings, 33.8 million are less than half a hectare each. As these often constitute the farmer's sole means of livelihood, farmers would gain considerably if they adopted conservation farming for their landholdings would then yield more without added expense.

A forest regenerates itself from fallen foliage and diverse animal, insect and microbial life - a capacity mcploited for centuries by the slash-and-burn technique, biown as jhum' in India. This technique gives over- worked soil a chance to recover, but as land becomes scarcer, jhum farming becomes untenable.

In Nairobi, when the fallow periods became far too short, the International Institute of Tropical Agriculture developed a system in which leguminous plants were planted along with food crops to restore soil fertility. In many Asian countries, there is atradition of planting leguminous shrubs and trees as fencing for ricefields and kitchen gardens.
Taking a leaf from these practices, the International Institute of Rural Reconstruction (URR) at Cavite in the Philippines began developing a system in 1984 that combines techniques from agro-forestry and bio-intensive (as distinct from chemically intensive) farming.

Having worked with farmers from India, Bangladesh, Kenya and Guatemala, IIRR assistant director Raquelito M Pastores explains, "Everything we do here is drawn from the knowledge of the people." The IIRR programme is being implemented in several villages near Cavite and it has been explained at international workshops.

"There's a certain magic about the fast-growing multi purpose trees", says Pastores. "They have the ability to sprout fresh s 'hoots from the stem when lopped repeatedly and to regenerate about 5 tonnes of leaf and an equal quantity of wood within a year of being lopped." In one experiment there was a 28 per cent increase in rice yields when loppings of Leucaena, planted five metres apart on paddy bunds, were added to the soil.

IIRR recommends trees should be spaced upto four metres apart, and advises the use of local varieties, though many of these are slowly disappearing. Its advice is based on the poor performance of imported seeds, which proved particularly susceptible to pests.

For woodlots, IIRR recommends a mixture of quick-growing fruit and timber trees. Says Pastores, "In the Philippines, we promote fruit varieties such as custard and star apple, guava and mango. It is these that make a woodlot complete."

URR encourages farmers to grow Leucaena on hillside contours..as a soil erosion barrier and practise alley cropping, which involves cultivating rice, corn or vegetables between rows of trees. The leaves are used as fodder and fertiliser and the branches as firewood and stakes.

Because fodder is vital for livestock development, IM promotep "intensive feed gardens", in which grazing grass is grown between rows of multi-purpose trees, with two-thirds of the tree leaves going to the soil and one-third to animals. An area of 100 sq m cultivated this way can reportedly feed upto six goats, besides also reducing fodder-foraging time.

The new system, says Pastores, aims at improving the nutrition of smallholder families. "Our experience is that bio-intensive gardening almost always obtains higher yields than conventional methods," Pastores explains. "Our approach is to first train people as garden promoters (which includes Ein understanding, of nutrition) and these promoters then go back to the village with seeds and other requirements. When they demonstrate the efficacy of the bio-intensive methods, peasant families often come forward to learn and share in LMR advocates the skills."

One method of bio-inten cultivating crops sive farming is cultivating crops that have different root with different root lengths, as this reduces the rate of soil exhaustion because each plant taps a different lengths. layer of soil. Also, the root hairs left behind in the soil after harvesting contain valuable organic residues, which fo ter earthworms. These worms then produce twice th! ir weight daily in worm casts rich in nitrogen, potassionate and phosphorus, which enrich the soil.

Planting a variety of plants also limits pest infestation and disease. Here, too, cultivation of local plants is encouraged because they are more disease-resistant. Says Pastores, "We find that aromatic plants such as marigold and garlic are excellent insect repellants."


Diversity in a small space needs careful planning. Vegetable plots are usually divided in four, with rotational growing in each plot of leafy vegetables, such as mustard and lettuce; fruit vegetables, such as brinjal and tomato; root crops, such as sweet potato and radish, and legumes, such as winged bean and pigeon pea. IIRR researchers estimate a family can obtain upto 2.7 kg of vegetables a day from a 46-sq-m plot, prepared with loose soil to improve water retention. The plants are placed close to each other, with their leaves overlapping, to save space and water and reduce evaporation.

IIRR's emphasis on the natural and the practical is one of its most striking features. It has drawn up a list of pesticides based on local vegetation, which includes ground custard apple seeds, crushed chilli, wood ash and neem extracts (See box). Also on their list are rich compost brews evolved from ash, eggshells, seashells, fishmeal, bonemeal and farm vegetation. Nets are sometimes used to protect plants from pests. Pastores estimates the methods they have listed can eliminate more than three-quarters of pests.


But not everything in the garden is rosy. "Some people are not receptive to the technology, especially those who don't own land," says Pastores. "They ask us why they should take the trouble to contour the land, make hedgerows, dig-, canals, prepare beds and replenish the soil with cb4npost, when it's not really their land."

Conservation farming is labour-intensive and in some countries, including the Philippines, extra help is hard to obtain. As the average daily wage for a farm labourer is 50 pesos (about Rs 55), "the young just don't find it -worthwhile to remain on our farms any more," says Pastores. IIRR encourages mutual help groups to over-come this problem.

Many conservation farming techniques need to be adapted to specific social and economic conditions and these are still being refined. In the early 1980s, for example, Leucaena was avidly promoted by conservation farming enthusiasts as the answer to disappearing grassland pastures. Fodder trees are the need of the hour, was their call and Leucaena was hailed as a miracle tree. But with the finding that Leucaena leaves contain a high level of mimosine, an amino acid that can taint milk and cause hair loss, the miracle was tarnished. However, scientists have concluded since that toxicity is not a problem if Leucaena is mixed with other feed.

Perhaps the strongest argument that can be made for conservation farming is that it has the potential to deliver more food, fuel and fodder to the developing world's poorest farming commimi ies. These are the farmers who are already squeezed by skyrocketing prices of fertiliser, pesticides and fuel and the change in world market demands from food to cash crops.