How green is your money? Investors try to figure out as plantation companies take them for a ride 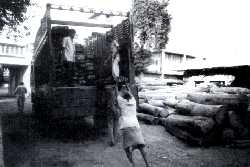 DOES money grow on trees? The plantation companies' advertising blitz had the investors believe that it really does. But that, as an investigating committee of the ministry of environment and forests (MEF) found out recently, is very far from the truth: a huge gulf exists between the "real" profit figures and what these companies promise their investors. And now, a massive sum of investors' money - worth more than Rs 2,500 crores - is at stake somewhere within these companies' plantations. Welcome to the real world, where money - contrary to all the advertisements - does not grow on trees.

The investigation was conducted by a six-member interdepartmental committee of experts (MEF committee) lead by P B Gangopadhyay, from the Indian council of Forestry Research and Education. The committee scrutinised the claims of several teak plantation companies, which attracted large investments some two years ago from the nation's urban centres. Investors were mostly drawn by the promise of huge returns - some as much as 50 to 90 times their investments.

The plantation companies all offered their own plantation schemes which, incidentally, were all variations of one essential idea: an investor gets an agricultural income without being involved in any of the tree-growing operations. The trees or the plots belong to the investors who sign a contract with the company for its maintenance and growth against the money they have invested. In return, the company promises a certain cubic feet of the tree to the investor at the time of harvesting, or its equivalent in cash.

Besides the controversial claims of high returns by the companies, there have been other problems. A R Chadda, a member of the committee, says: "There are several financial and other irregularities which have to be examined." Parasrampuria plantations, for instance, claim that several crores have been spent on constructing of a small check dam to draw water for the plantations. "The escalated amount quoted by the company for undertaking such a task is unheard of. It is a bogus claim," says Chadda.

Moreover, the investment-per-unit area taken from the investors by the companies is higher than even the afforestation cost under the afforestation schemes of the Union government which is Rs 30,000 per hectare, or Rs 12,000 per acre, inclusive of the maintenance costs for 10 years. Compared to this, the amount charged by these companies - Rs 4.44 to 10.75 lakhs per acre - appears ridiculously high. They also often mislead their investors by advertising these schemes as "risk-free". They claim, for instance, that the plantations are insured, when the insurance cover only holds good for input costs and not the promised returns.

The reputation of these companies suffered its first jolt about two years back, when several cases of fraud plantation firms came into light. Damage control measures were immediately called for, and some of the leading players of the industry - Sterling Tree Magnum, Anubhav Plantations, Parasrampuria Plantations, VGP plantations and three others - formed a teak planters association in 1995 to regulate their activities. Says C Natesan, chairperson of Anubhav Plantations, "Although several teak companies were approached to form the association, only seven of us came forward. The rest simply refused to join or else pulled out after committing themselves." Anubhav Plantations is also one of the six companies that agreed to be investigated by the committee appointed by the MEF. The others were Parasrampuria, Sterling Tree Magnum, Enbee and Sanghi plantations.

Most of these companies employ similar methods for acquiring land from farmers for their plantations. Usually they buy low-quality degraded private lands as these are available cheap. However, apart from making farmers landless, it also leads to concentration of lands in a few hands. Some of the plantation sites of Anubhav, termed as "unproductive" by Natesan, were earlier used by farmers to grow subsistence crops like minor millets and other dry crops. The scene: Sankarapuram, a small village near in district Madurai, Timal Nadu, where Anubhav holds significant teak plantations. Most people here have sold off at least a part of their land to the company under bad drought conditions.

Families, after selling off their lands, now work as labourers for the ompany's plantations. Mallika, a widow stricken by drought, sold off her land and used part of the money for her son's marriage. Now solely dependent on the wages to buy her rations, she admits that life has become difficult. Earlier, she could get sorghum, maize and kombu from her fields which would take care of 70 per cent of the family's needs.

Further, the company's activity is also changing the use of agricultural land. Villagers are taking to commercial plantations. Farmers, being unable to invest in water sources, have sold off the drier lands to the company, using the money to buy better quality lands where they grow mango, silk cotton, paddy and coconuts. The farmers in the area sell off lands due to their poor productivity. With proper investments from the plantation companies, productivity of these lands may increase but the returns would then go - not to the rural communities - to the urban investors. This might potentially generate some employment at the company site, but unforeseen consequences such as unrest may also occur, as happened at the Shahpur site. Shahpur witnessed clashes between company and the angry villagers, who were irked because of the company's failure to live up to its promise of providing them employment.

And to top all this, a new controversy has recently added more fuel to the fire. It concerns the intensive use of water - a scarce resource in the area - for plantations by these companies. With Anubhav bringing in water from the well dug on the Kuchnoor riverbed through a four-kilometre-long pipeline, the Kuchnoor villagers are afraid that soon Sankarapuram and other nearby villages might have to follow suit. And this might lead to the excessive use of river water and even drying up of the river. Thus, the key issues of the controversy are the financial, social and environmental implications of expansion of these companies.

All the same, a ban on the activities of plantation companies has not been recommended by the mef committee. Chadda feels that these companies should promise more modest and realistic returns. Even these will be higher than interests earned through fixed deposits, and there will be no need to make exorbitant promises, as they do now to attract investments.

Thus, the buzz word is "regulation". In line with this, the committee suggests preparation of technically sound project documents and management plans by the companies which should then be approved by the state government before investments are sought.

After the report was submitted in December 1997, the Union government announced that since the primary concern of the committee is proper monitoring of investments these companies have acquired, they will now be regulated by Securities and Exchange Board of India (sebi).

sebi is already working on drafting the regulatory guidelines. But a fair solution may still be miles away. Even if sebi manages to regulate the financial problems of the controversy, what of the social and environmental impacts?

Experts point out that trees grown on these lands will not really help reduce firewood or fodder crises in the rural areas. Teak plantations will mainly cater to the needs of the urban population such as furniture and construction industry.

What is really needed is a strategy to encourage these farmers to take up agroforestry on their degraded or low-productive private lands which could not only generate forest cover, meet the fuel, fodder and industrial needs besides regenerating degraded lands.

This article is based on the MEF committee report "Growth and Economics of Private Plantations of Teak" submitted on December 31, 1997.