Incredible though it may seem, it is being claimed that cancer and multiple sclerosis, the two deadly diseases that have often eluded cure, can be successfully treated with Rasayan Shastra or … 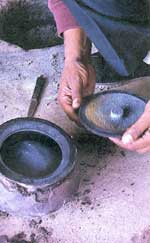 WHAT is the role of metals in human health? Ten-year-old Salman had blood cancer. Physicians at the New Delhi-based All India Institute of Medical Sciences, gave him not more than three days. In desperation, his parents took to him to an ayurvedic physician, who administered a concoction containing mercury, arsenic and silver. Salman is reportedly alive and kicking today.

F J Italia, a scientist living in Hyderabad, was suffering from multiple sclerosis (ms), an as-yet-incurable immune disorder. Allopathic medicines had completely failed him - he became almost totally paralysed and needed an attendant for 24 hours. He decided to give ayurvedic treatment a shot. Since the last five months he has been taking medicines containing gold, arsenic, mercury and calcium. Now, though still far from being completely cured, Italia feels cheerful and is reportedly leading a normal life.

These are just two among several cases that have been successfully" treated with the ancient Indian healing system of metal therapy. Evidently, curing cancer and ms with doses of toxic metals goes beyond the placebo effect or faith healing. For, in western medicine, metals such as arsenic and mercury are decidedly poisonous.

Not surprisingly, Vaidya Balendu Prakash, the Dehra Dun-based ayurvedic physician who claims to have cured cancer and ms patients with his metal recipes, has attracted a lot of controversy, both here and abroad. Recently doctors in Australia, warned patients suffering from ms in their country of the danger inherent in Prakash's metal concoctions (See: Multiple confusion). Prakash's patients, however, have a different story to tell. Most of them have expressed great faith in Prakash's treatment and have apparently benefited significantly from it. The controversy raises important questions about the role of metals in human health. What is the connection between metals and disease? At what concentrations do they express their toxic and therapeutic effects? Is modern diet seriously deficient in these trace metals? Are crops of today less endowed with these trace metals than those of yesteryears?

The therapeutic powers of metals were a constant fascination for the alchemists of the ancient and mediaeval world. Chinese and Indian alchemists discovered the healing touch of metals such as gold, mercury, copper, silver and arsenic. But with the advent of modern medicine these traditional healing systems were pushed out. In recent times, however, scientists and nutritionists have begun to take a closer look at the role of metals in human health.

Investigations have revealed that out uf the 111 elements, 92 naturally occur with 19 artificial or human-made elements. Some scientists, however, believe that the majority of these elements are probably the re as contaminants from the environment and not as essential components of human beings.

However, many elements which were hitherto considered non-essential have in recent years been reclassified as possibly essential elements. Over the last 56 years num- bers of elements present in the human body has gone up from 18 to 81 as a result of increasing knowledge about the human body.

H A Schroeder, author of Trace Elements and Nutrition some positive and negative aspects, writes that many, if not all elements could probably be found in traces in the human tisSmall is powerful sueS it sutticiently sev tive techniques w4 developed. It is hard believe that at su infinitesimal conce trations, metals capable of causing adverse or benefic effects on health only 5 atoms of cobalt for instance, are present for every billion atoms in the body. Incredibly the body can do with so. little and yet cannot get along with none at all! From 5 atoms per billion to zero atoms per billion seems such a small step. Not really, if we look at the mathematical explanation given by Isaac Asimov, the celebrated science and science fiction writer (See: Small is powerful).

According to several studies, at least 235 diseases and functions of the human body are affected by 81 component elements. The effects are brought about by their deficiency, ezcess or medicinal use. The excess of at least 26 elements in plasma, brain, and the nervous tissues has been associated with a number of neuro-psychiatric diseases or symptoms. For czample, alcohol abuse, anxiety, ataxia, chronic focal seizures, coma, conduction defects, convulsions, deafness, dementia, depression, dizziness, schizophrenia, among many others. Particularly interesting examples of excess element disorders are: dialysis dementia (due to excess aluminium in dialysate), schizophrenia (due to excess copper accumulation), low jQ, learning disability and neuropathy (due to excess lead) and the Minamata disease (due to excess mercury).

Deficiency of at least 17 elements is also linked to a variety of mental diseases and symptoms. Noteworthy examples of deficient element disorders are: alcoholism and delirium tremens due to deficiency of magnesium, selenium and zinc, anorexia nervosa due zinc deficiency, restless legs due to low iron, homicides and mental disorders due to low lithium con- tent in drinking water.

Therapeutic use of elements is (or was) made in dyskinesia (manganese), epilepsy (silver, bromine, lithium), Grave's disease (lithium), and schizophrenia (lithium, zinc). The most important among these is the use of lithium salts for the treatment of manic depressive psychosis and schizophrenia.


Nobody knows for certain the point at which a metal turns benevolent, or malevolent for that matter. While there have been several studies on die toxicity of metals, their beneficial effects have largely been ignored by western science. Take, for instance, the experience of Vaidya Balendu Prakash, the ayurvedic physician who claims to have cured cancer and ms patients with his metal therapy. The government sent two investigating teams in 1983 and 1986, to look into his basis of treatment. Though they found prima facie evidence in favour of Prakash, the Indian scientific community has done nothing so far to scientifically analyse his medicines. For a practitioner of modern medicine, the idea that an ad hoc melange of toxic metals like gold, mercury and arsenic can cure scourges, such as cancer, is preposterous.

But the rising popularity of Prakash's therapies persuaded a British medical team in 1990, to visit India and scrutinise his patients and medicines. However, though they conceded that Prakash's medicine was undoubtedly effective in controlling blood counts and spleen size, they believed the therapeutic benefit of the medicine was probably due to its arsenic content.

Furthermore, the team reported that arsenic is well documen ,ted to have been used for just this purpose in the western world early this century, mainly in the form of Fowler's solution until the advent of radiotherapy in the 1930s. But according to them there was little to suggest that the medicines contained any gew, potentially curative properties.

Prakash is neither convinced nor upset by the condemna- tory tone of the British team's report. He says that his medicines for treating leukaemia have processed silver as the active component, and is designed to stimulate the growth of healthy bone marrow while suppressing the growth of leukaemia. He believes that western medicine does not produce drugs with this biochemical process and that the beneficial effects of these medicines cannot be deduced from western medical research. into metallic compounds.

Prakash is also not willing to accept that his medicines were causing arsenic poisoning, He thinks the team reached a conclusion on the basis of limited clinical evidence, ignoring the possibility that the symptoms might have other clinical explanations. Judging from the two accounts, there is clearly a case for investigating the nature and effect of these medicine.

The Vaidya's working hypothesis is derived from Rasayan Shastra, one of the eight clinical specialities of ayurveda. It emphasises the need for metals in maintaining the equilibrium of the human body. These are identified as copper, mercury, gold, iron, lead, silver, tin and zinc. Any deficiency, excess or imbalance in the composition of these metals leads to various disorders. Rasayan therapy comprises a variety of compounds appropriate to the treatment of the particular ailment. The therapy is said to impart longevity by strengthening the immune system.

The trouble with metal therapy is that the extant texts of Rasayan Shastra are couched in a metaphorically flowery language that doesn't lend itself to precise meanings and interpretations. Secondly, it takes anywhere between three months to two years to prepare the medicines. Consequently, .most ayurvedic practitioners abandoned metal therapies in favour of the less painstaking herbal therapies," says Prakash. The government's ambivalent attitude towards traditional healing methods has not helped matters. According to Prakash, while ayurvedic colleges churn out graduates who illegally practise allopathy in small towns, the ayurvedic research institutes haven't produced a single drug of any commercial significance.

The problem with alternative medicine is that a large number of its practitioners are charlatans, a fact which works against it, not to forget the silent, suffering millions afflicted by diseases for which modern medicine has as yet, to come up with a viable answer. The sad part is that even when the evidence in favour of claims by metal therapy practicitioners is overwhelming, the scientific community chooses to ignore it, a stance which only aggravates the exploitation of gullible masses by ruthless quacks.