Telecommunications and the television (TV) broadcasting sectors have been most instrumental in ushering in what is called the 'Information society' / 'global village'. Although the telecom sector … 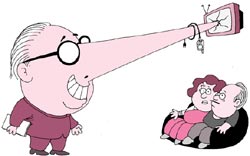 " As he recollects: "When the photocopier was invented, people questioned its purpose because we had ample amounts of carbon paper. Look at where that invention stands today. Markets may support the innovations in technology, but the inventions come by themselves."

Others take the middle path: "It is both the market and the technology which drive change. Technological innovation will happen anyway," says Tim Kelly, director, Strategy and Policy Unit, International Telecommunication Union (ITU), Geneva. (ITU is a global organisation that brings governments and industry together to coordinate the establishment and operation of global telecommunication networks and services.) "Take for example the short messaging service (SMS)," says Kelly. "It is actually a primitive technology which existed on mobile phones since quite a while back. But it has been only five to six years ago that it was marketed and used success-fully. People used it because they needed it." D K Ghosh, executive director and board member, Siemens Public Communications Network Private Limited, says: "There is always a synergy between the innovation and market forces." Consider, says Ghosh, the mobile phone: "In the beginning, it was only for voice transportation. Soon it was also used for data transport. The Internet developed separately. But the Internet on the mobile was the inevitable next stage. As the benefit of personal connectivity was demonstrated to the public, the demand for it grew rapidly and now there are a billion-odd mobile phones, marginally higher than wire-connected telephones (landlines)."

"The invention of newer mobile technologies that enable speedier transport of voice, data and video is a wonderful example of technologies and markets interacting dynamically. The shelf life of each invention is reduced as the pace of invention accelerates. Markets drive technological innovation as inventors respond to perceived or felt market needs, but technological innovation also creates markets of its own. The PC was not invented by Bill Gates; he merely realised its potential. Needs create innovation and innovation creates needs," says Ghosh.
One common thread that links both technology and markets is regulations. But can we really regulate technology? No, feels Sam Pitroda, chairperson and CEO of WorldTel Limited, UK and hailed by many as the 'father' of the indigenous telecom boom. "There is no way you can regulate technology. It is a process that keeps changing. What you are trying to regulate today is not worth regulating tomorrow."

The world over, regulations for the TV and telecom sectors came almost immediately after their potential became clear. Regulations for cable TV in the US began in the 1960s and 1970s, when the Federal Communications Commission (FCC) placed restrictions on operators on offering movies and sports programmes. Other countries where cable TV spread also started regulating the sector. "Perhaps India and Taiwan are the only nations where the cable and broadcasting industry is not regulated," said Pradip Baijal, chairperson of the Telecom Regulatory Authority of India (TRAI) in a recent interview. TRAI was recently appointed the regulator for the broadcasting sector as well.

The world over, if you are an TV operator and you want to offer pay services, you choose one of the many available encryption technologies for CAS and then offer your service to potential subscribers, says Manfred Mller, Head of Strategic Marketing, SCM Microsystems GmbH, a company which markets smart card reader technology for conditional access system modules. The main companies for CAS include Irdeto, Viaccess, NagraVision, Conax, Cryptoworks and Betacrypt (see map: Let the CAS market pan out). "The European landscape looks like a patchwork: each country has one major player and some smaller ones. Wireless frequencies were first allocated to security needs and only the residual frequencies were allotted to public use, as in radio and TV and wireless phones," says Ghosh. In the US, because telecom was in the private sector, a regulatory authority called the FCC was set up; it decided on communications policy, frequency allotment and level of competition and rules of service for the layperson. However, when services burgeoned, taking teledensities beyond 50 per cent, and new services became possible, government-controlled companies couldn't adequately respond to market dynamics.

Thus, Britain was the first to demonopolise the telecom sector. But by the late 1980s most European governments had already thrown it open for competition. "Regulatory regimes had to be set up when several service providers came up. As the incumbent service provider -- British Telecom in UK, France Telecom in France -- had an overwhelming presence, new service providers would not come up unless a level playing field was provided. So to promote competition, regulatory regimes and institutions (to formulate these regimes and implement them), had to be set in place," Ghosh adds.

In India, too, TRAI came up only after the private sector was allowed to enter the telecom arena. "Even today, 90 per cent and more of the (landline) telephony is government-owned. Newcomers in fixed telephony, like Bharti or Tata Tele, needed protection by an independent authority to prevent big brothers like BSNL from destroying competitors through unfair practices," says Ghosh. Regulations have basically ensured that level playing field exists. A new company cannot function at all if the incumbent does not allow it to reach its own subscribers. So regulatory institutions are essential to force the incumbent to provide interconnection to newcomers. The regulators lay down the rules for facilitating interconnection. "But regulators should not get involved in micro-issues like tariff fixation, which was being done by TRAI till some time back," says Desai. Sam Pitroda feels that the Indian telecom sector is only focussed on the technologies developed in the western countries: "We did not really focus on the Indian needs, and technologies that were better suited for the Indian masses." The result is evident. Though the overall teledensity in the country has been steadily increasing, rural teledensity has remained abysmally low (see box: Rural shortfall).

December 2003 marked a watershed in Indian telecom regulations, when the decision to move on to the unified access regime was made. Now, armed with a single license, an operator can provide any kind of service -- wired line, cellular or WLL -- using whatever technology they feel like. Slowly but surely, TRAI has been coming back on track. The next step is the complete unified license regime. But a number of issues still need to be resolved. These include WiFi (wireless fidelity technology that is cheap but is allowed only within buildings in India, such as airports), local area service providers (in remote villages where basic service providers are not ready to go) and domestic VoIP (voice over Internet protocol).

"Ideally the regulator should consist of bureaucrats (policy-making expertise), representatives from the incumbent company (technical issues and social obligations), industry (business aspect) and judiciary (arbitration side)," says Desai. As markets mature, regulators more or less become watchdogs. "Take the case of New Zealand. It is such an open market that the regulators work part time, and pursue their own separate careers" says Desai. "In Australia any new company does not even need a license. It just needs to send a notice to the government," says a TRAI official.

The authority would do its job well if it could introduce the mature regulations that help the market mature. Only then will there be a win-win situation in which the service providers get a level playing field and the consumers know their options. This is the real responsibility of TRAI.