Locust swarms are the bane of farmers in more than 66 countries. Small wonder then that the locust is the only insect that has a global committee working to outwet it 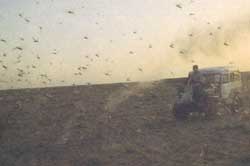 THE WORST fears of the people living in the Thar Desert are coming true: Hoppers -- new-born locusts -- that could not be eliminated by pesticides, have formed mature swarms in the westernmost parts of Jaisalmer district. The locusts have now taken wing in search of green food, and havoc awaits crops and fodder grass all over Rajasthan and adjoining Gujarat.

Apprehensions that the swarms may even reach Haryana and Punjab look more realistic now, though officials argue they can still control the menace.

The problem has become more serious because of fears that more swarms may also cross the border from Pakistan. There have already been reports of large-scale breeding on the Pakistani side of the Thar desert, and with the wind blowing towards India, the swarms are soon expected to arrive in Rajasthan.

Desert locusts had migrated across the Arabian Sea to invade parts of Gujarat and Rajasthan in early July this year (Down To Earth, September 15, 1993). Although the swarms had soon moved on with the winds or been eliminated by pesticides, eggs laid by them hatched into hoppers which overran the desert.

Extensive pesticide-spraying operations were launched by the Union agriculture ministry's Locust Warning and Control Organisation (LWO) in the 150,000 sq km area affected in Rajasthan and Gujarat. Officials claimed in mid-August that hoppers would not be allowed to mature, but the swarms forming in Jaisalmer district could not be contained. Huge bands of locusts, extending upto 7 km in length, have been spotted in Gamnewala, Kishangarh and Ramgarh villages.

The dire warning issued by R Breitbaird, Islamabad representative of the UN's Food and Agriculture Organisation, the international locust monitoring agency, shows all signs of coming true. "This is a dangerous and unpredictable period. Hoppers coming into the swarm-formation stage in Pakistan and India must be immediately controlled or a cycle of plagues lasting 2-3 years could set in," Breitbaird told Down To Earth. "The locusts could migrate back across the Arabian Sea to Yemen and Saudi Arabia, thereafter returning year after year."

That this is not an empty threat is amply borne out by the history of locust plagues in India. There have been a dozen plague cycles in the country since 1860, each lasting an average of seven years. Crop losses due to locust plagues have increased the incidence of famine in India. In the 1926-31 plague, crop losses of Rs 10 crore were computed in Punjab and Uttar Pradesh alone. The country withstood losses of Rs 2 crore in the next major plague of 1949-55, and about Rs 6 lakh each in 1959 and 1978. Although there was an upsurge of locusts in 1988, there was no damage to crops.
While control operations must obviously be stepped up to deal with swarms, which are more dangerous than hoppers and more difficult to control, it appears that the officials themselves fear they may have dumped more pesticides into the desert soil than is safe. Ground-level officials claim to have received recent orders to suspend the use of dieldrin, a highly toxic and retentive pesticide banned for use against all other pests. However, Pawan Kumar, an official at the locust sub-station in Ramgarh village complains, "Other pesticides such as benzenehexachloride (BHC) are not as effective."

Meanwhile, locust control teams, overworked since July, appear to be running out of steam. Says Anil Sharma, who heads the locust sub-station in Jaisalmer sub-division, "We are spraying as much as we can. What more can we do now?"

Locusts come in large numbers, traversing continents and oceans. From time immemorial, desert locusts have journeyed with the winds in search of rain and food, moving rapidly and covering areas as extensive as 16.5 million sq km.

From the deserts of the Sahel and the arid zones along the Red Sea, they grow steadily in numbers and begin to spread across the Arabian Sea. They fly at heights of upto two km and, aided by winds, can cover a distance of 2,000 km at one stretch. Travelling in bands as dense as 12,000 per sq km, they eventually land on the shores of the Indian subcontinent, their arrival coinciding with the southwest monsoon.

By this time, the monsoon showers have coaxed greenery out of the inhospitable Thar desert and this becomes a veritable feast for the exotic visitors. Crops that grow fast and full to the farmer's delight -- sometimes after years of drought -- and thriving bushes of fodder grass: every speck of green is food to these invading hordes of hungry desert locusts (Schistocerca gregaria).

Possessing gargantuan appetites unparalleled in the insect world, each of these small creatures eats its own weight of plant matter every day. "Popular notions about locust appetites may seem exaggerated," says a scientist with the Indian Agricultural Research Institute (IARI), "but the male weighs an average of 2.2 gm and the female 3.2 gm. So, feasting parties of 10 million locusts can devour 200,000 tonnes of green food in just 24 hours." Such voraciousness makes desert locusts one of the farmer's worst enemies in more than 65 countries.
The first major attempt to study locusts was made in 1920 by Boris Uvarov, a Russian scientist who floated the theory that the desert locust is a species of grasshopper that becomes a devastating scourge in a phase of its life cycle.

We know now that the desert locust begins life as an innocuous short-horned grasshopper. When vegetation in the desert begins receding due to continuous drought, an intriguing and fearsome transformation takes place in the grasshopper. Living so far in isolated niches in the desert, the grasshoppers crowd for food and shade into the small areas that still bear vegetation. Close proximity with each other then causes an intriguing mutual excitation, inducing behavioural and physiological changes.

The grasshoppers' pigmentation changes from green to black, helping them to absorb more heat. This leads to intense activity among them and, abandoning their solitary habits, they soon acquire an extremely gregarious nature. They begin to move and feed together in bands, forming swarms that take wing for great distances in search of food. The harmless short-horned grasshopper has become a devastating scourge -- the desert locust.

Moving away from inhospitable lands in search of food, locusts also hunt for suitable breeding environments. "Swarm movements depend on rainfall," explains Satish Chandra, deputy director of the Locust Warning and Control Organisation (LWO). "When a long dry spell in the Thar is followed by good rainfall -- as it was this year -- locusts are immediately attracted."

Locusts need moist, sandy soil in which to lay eggs and fresh vegetation for hoppers to grow into adults. A good monsoon is therefore always cause for concern to locust authorities and farmers, who worry that a locust invasion could come just when their crops are doing well. Swarms migrate according to seasonal rains and the prevailing winds to two widely separated geographic belts -- the winter-spring breeding zone and the summer-autumn zone.

Although the Sahel and the Arabian Peninsula are the major breeding grounds of the desert locust, it is also indigenous to India. Small populations exist in the Thar, but seasonal upsurges in their numbers can usually be brought under control.

Attracted to rainfall areas, locust plagues are governed almost entirely by the winds. The 1985-88 plague in the Sahel and the Arabian Peninsula, for instance, collapsed suddenly because unusual wind patterns carried swarms heading for Morocco into the Atlantic Ocean, where they perished.

Breitbaird notes one aspect of the problem of tackling the locust menace is that the Thar is so huge, "it is impossible to employ the ideal amount of resources, particularly in developing countries." But scientists are becoming increasingly critical of the "pesticide philosophy". IARI entomologists say, "Each plague is dealt with in a fire-fighting manner. Pesticides, both toxic and expensive, are indiscriminately used and are considered the only way to tackle the menace." The entomologists say a long-term, pest management strategy would reduce the need for using pesticides. By closely monitoring population dynamics in locust breeding areas, potentially dangerous populations can be controlled with the least expense and pesticide-use.

Destroying vegetation by burning it or overgrazing as also the continuous use of pesticides can encourage locusts, because they kill the pest's natural enemies. The regions of Punjab, Uttar Pradesh, Haryana and Delhi bordering the Thar are suitable for locusts, but also allow reptiles -- natural enemies of the locusts -- to thrive all year, thereby preventing locust breeding. Scientists stress an integrated locust management system therefore must combine both chemical and biological methods to produce optimum results.