Sukhomajr, a village in Haryana, has come to symbolise how community efforts at natural regeneration can improve both the forests and the people's standard of living. 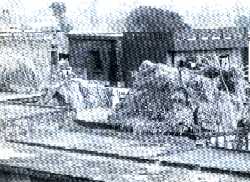 IN THE early 1980s, the people of Sukhomajri village in Shivalik range of the Himalaya in Haryana's Ambala district earned nation-wide acclaim for the way in which they had utilised their forests and water to their benefit. But even they would never have imagined that the 400 ha forest of khair (Acacia catechu) trees they nurtured would one day be worth several crores.

An estimated 5,000-khair tree have matured in the Sukhomajri forest. At an average price of Rs 1,000 per quintal of heartwood, these trees can reap more than Rs 50 lakh in timber alone. One quintal of khair heartwood yields upto 6 kg of katha -- an extract used in medicine, pan and natural dyes -- that sells at Rs 500 per kg, adding upto Rs 1 crore to the worth of the forest. And, about 5,000 trees will mature in the forest every year.

Sukhomajri's khair forest is, literally, a gold-mine and the villagers demand a major share of the earnings from it. If their demand is conceded, their stake in long-term protection of forests could be guaranteed forever. At present, they look for short-term gains from water for agriculture and minor forest produce such as bhabbar grasses, which have already taken the villagers' annual per capita income to or by more than Rs 2,000.
The question of the villagers' share in the forests awaits a state government decision on a bill proposed by the Haryana forest department (HFD), which has been pending for 18 months. It is the result of a joint forest management programme introduced in 1976 that Sukhomajri has prospered. Whereas the Sukhomajri villagers want a major share of any profits from their forest, the proposed bill states they will get only 25 per cent of the benefits if the tree density in the forest before the inception of joint forest management was more than 40 per cent. If the tree density was less, then the profits will be shared equally.

Says Gurnam Singh, Haryana's principal chief conservator of forests, "The people have got immediate gains from bhabbar and other grasses. If we give too much weight to the people in the case of timber, the state exchequer will suffer."

But P R Mishra, formerly of the Central Soil and Water Conservation Research and Training Institute in Chandigarh, who promoted the participatory management project in Sukhomajri, is pressing for a 60 per cent profit share for the village society to develop community assets and 10 per cent for kalyan kosh -- a village welfare fund to be created for the development of wastelands in other villages.


With growing prosperity, Sukhomajri villagers are becoming increasingly conscious of economic self-reliance in the creation of creating community assets. Recently, they stopped auctioning bhabbar grasses, which their society -- Hill Resource Management Society (HRMS) -- leases from the forest department, to contractors. Asks HRMS treasurer Prakash Chand Melu, "Why should we allow the profit to others if we can sell it to the paper mills ourselves?" They expect to earn and keep a profit of at least Rs 10,000 per year.

Today, the 80 households in the village have replaced their thatch-and-mud dwellings with brick-and-cement houses and about 40 of them own television sets. Comments Jethu Ram of Sukhomajri, "Who could imagine that televisions, tractors and bicycles could be had for mere grass and water?"

Just about five years after the setting up of the HRMS in 1980, the annual household income has increased to Rs 2,000 to Rs 3,000 ***(check) (see box). Concedes S K Dhar, conservator of forests, HFD, "Participatory principles have proved the wealth potential of the land."


This phenomenal increase in income has been possible mainly due to natural regeneration. According to a study by Dhar in 1992, the tree density in Sukhomajri forest increased from 13 per ha in 1976 to 1,272 per ha in 1992 and grasses from 40 kg per ha to 3,000 kg per ha.

Sukhomajri is one of the few villages to be taxed on income from natural regeneration. A 1989 amendment in the income tax act brought registered societies such as HRMS within its purview. HRMS was liable to pay 15 per cent income tax, but it took the initiative to have such societies exempted the same year. However, the society continues to pay 10 per cent sales tax on bhabbar, which was imposed last year with retrospective effect from 1991. They also have to pay a toll on bhabbar taken to the paper mills in Himachal Pradesh at the rate of Rs 100 per carriage.

Social activists associated with Sukhomajri have for long claomed that this toll is unfair. Says Madhu Sarin, a social activist who works on natural resource management, "It is ironic that the nearby Ballarpur paper industries should get income tax exemption for bhabbar they purchase on the ground that it is processed into paper. But the poor villagers have to prove each year that they do not use bhabbar for commercial purposes.


Sukhomajri has become a model of participatory management. Says R K Mukherji of the Society for Wasteland Development, "The project evolved without a blueprint and became increasingly more participatory as the people gained confidence in self-management."

The project was begun in the mid-1970s out of concern for Sukhna lake near Chandigarh, which had lost nearly 70 per cent of its water storage capacity due to siltation from the catchment area. Mishra selected Sukhomajri, which is in the lake's catchment area, and constructed four check dams and planted trees. But Mishra's attempts failed because the villagers had little regard for Chandigarh's water concerns.

"It was a remark from a villager, Daulat Ram, which made officials wiser," concedes Mishra. Late Daulat Ram had told Mishra, "Do not try to treat in the forest a problem that originates in the village."

Conservation meant little to the poor villagers, who could barely meet their food, fodder and fuel requirements from the denuded forest. When forest officials tried to impose checks on grazing, the villagers destroyed soil conservation structures in protest and stole wood at night.

A change in the villagers' attitude occurred in 1977, when four tanks built successively created an increased storage capacity and increased crop yield rates from 6.83 quintals per ha in 1977 to 14.32 in 1986. Says Hari Kishen, a village elder, "Pani aur jungle hi hamara tarakki ki jadh hai" (Water and the forest are the roots of our progress).

"Water acted as the catalyst in the transformation because the village had been dependent entirely on rain-fed agriculture with very low productivity. In return for water, the villagers were ready to protect the watershed," says Mishra.


For some time, there was tension among villagers on water distribution. But this problem was resolved through HRMS -- coupons for water were issued to each family, which could be traded or sold. Thus, the landless families could argument their incomes by selling their water shares.

Over the years, the water coupon scheme has fallen into disuse. But it has not led to serious discord because further increase in income has been sustained by higher yields of bhabbar and fodder.

Encouraged by Sukhomajri, HFD replicated this model of participatory management in other villages in the Shivaliks. But unlike in Sukhomajri, which is a single-caste, Gujjar village, implementing this model was not easy in the neighbouring multi-caste villages.

In Lohgarh, for instance, Harijans complain against the domination of the high castes. Says Dwarka Devi, a Harijan, "The Harijans are harassed for bringing thick logs (along with firewood), but high-caste errant members go unnoticed." Dwarka Devi says she is not even informed when meetings of Lohgarh's HRMS take place.

Claims an observer, "The status difference between the high and low castes has become sharper because the high castes have cornered most of the gains."


Problems over sharing common resources surfaced not just within villages but also between villages. A conflict arose between Dhamala and Sukhomajri over access to water in the common watershed. The problem was finally solved by building a separate dam for Dhamala residents.

A cooperative system risks falling apart in times of crises such as droughts or lack of funds, when becomes dependent on external help. But the Sukhomajri residents stood together even during the drought of 1987-88, as they realised the benefit of the check dams, though sometimes the HRMS had to cope with lack of willingness of villagers to help with desilting of tanks or repair of channels and rely on outside help.


It was realised that it was important to conserve water because it would help the growth such as grasses. "When the members themselves feel that cooperation will ensure profit by sharing some of the resources, they tend to stick together," says Jethu Ram.

Participatory management can improve efficiency of departmental investment in sanitation, drainage and other aspects of community development. The villagers in Dhamala, for instance, are eagerly responding to a programme in which the government builds latrines from material provided by the users. The HRMS has come forward to help those who cannot afford this.


In Sukhomajri, leaves are collected from drains to make manure. The villagers have reclaimed a marshland with the cooperation of an ACC cement plant in Surajpur. Waste cement dust from the factory was dumped in the area and then levelled.

It is not as if problems do not exit. The Sukhomajri community has been less successful in endeavours like pisciculture, rope-making and setting up of a citronella plant. These activities were managed independently by individuals and often led to disputes.

And, though natural regeneration has paid dividends, it has brought back the wild animals, which often damage village crops. Harassed villagers spend sleepless nights keeping vigil and have turned hostile to the animals.

But says Jethu Ram, "Jab tak hamara haq hoga tab tak sab kuch sambhal lenge" [As long as we have out rights, all problems will be tackled]. Whether his and other villager's rights will be acknowledged in the sharing of Sukhomajri's khair forest remains to be seen.