Seismologists may not agree on what caused the earthquake, but their views have made the government take up better seismic monitoring and analysis. 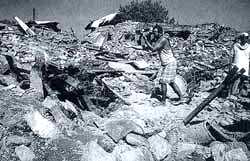 JUST BEFORE 4 am on September 30, the stylus tracing out the narrow, wavy line on the seismographs at the Indian Meteorological Department's (IMD) seismological observatory in Delhi began to oscillate violently. As the graphs rolling out of the machine's printer began to indicate an earthquake 1,400 km away, the mood of the officer on night duty switched from mild boredom to rapt attention.

The lurch of the stylus was even more marked in the seismographs of the Hyderabad-based National Geophysical Research Institute (NGRI). The needle swung beyond the width of the paper roll, indicating a major seismic disturbance just 260 km away.

Within minutes, the IMD headquarters in Delhi began receiving teleprinter and telephone messages from Nagpur, Nasik, Pune, Madras and Panaji. Section heads began analysing data and pinpointed the epicentre of the seismic disturbance at 180 N and 76.30 E. On the map, the location corresponded to Holli village of Latur district in Maharashtra. The earthquake measured 6 on the Richter scale. By 7 am, the information was conveyed to top IMD officials.

But officials at IMD, the department of science and technology (DST) and the Geological Survey of India (GSI), had little to say. IMD's seismology division director S N Chatterjee, asked to comment that evening on the calamity, remarked, "Nothing can be said now." Meanwhile, the GSI put out a stock reply: "This is a rare phenomenon."

And as the toll mounted over the next three days to more than 30,000, DST scientists were trying to answer the question: "How could a supposedly seismically stable Deccan give rise to such a destructive earthquake?"

In current seismicity maps, Latur district and much of the region around it in the Deccan Plateau are classified in Zone-I, denoting least susceptibility to earthquakes. In scientific and popular perception, the Deccan plateau was known as the "shield", consisting of extremely old and tectonically stable rock formations. "We are simply stunned," said a DST official.

In contrast to the restraint of officials, scientists were willing to provide seemingly precise reasons for the Latur earthquake. The most notable of these explanations came from J G Negi, former director-grade scientist at NGRI and presently director general of the Madhya Pradesh Council of Science and Technology. Negi said the Latur quake was caused by friction between two sides of the Kurudwadi rift -- a fault that runs hundreds of km from north of Pune to south-east of Sholapur.

According to Negi, the Kuruwadi rift passed directly through the epicentre of the Latur earthquake. Negi's theory also received support from T Chandrashekhar of the Indian Institute of Technology in Bombay.


But senior Indian seismologists like Vinod Gaur and Harsh Gupta, former and present directors general of NGRI, respectively, opposed the Kurudwadi explanation. Said Gaur: "It is important to avoid the trap of instantaneous explanations." He emphasised that any attempt to ascribe the Latur earthquake to the Kurudwadi rift must be accompanied by evidence that the rift was seismologically active.

Pointing out that only intensive monitoring prior to the earthquake could have established such seismicity, Gaur disclaimed any such knowledge. Both he and Gupta stressed the need to understand the Latur earthquake as part of the general seismic activity in the Indian subcontinent.

According to this view, India is crashing into the underbelly of Asia at the rate of around 5 cm a year. The most obvious results of this activity are the vast Himalaya mountain range and the equally massive earthquakes north of the Ganga. Less obvious, however, is that the whole of India feels the effects of the collision. There is stress and compression in the entire Indian plate, which is occasionally relieved in the form of earthquakes.


Says Gaur, "It is like compressing a nut in a nut-cracker. The pressure begins at the shell, but is felt by the kernel as well. When the pressure increases beyond a certain point, not only does the shell crack, the kernel also pops out." Supporters of this theory say the Deccan actually consists of several faults and it would be difficult to pinpoint which fault caused the Latur quake.

In contrast, Negi holds that the rifts are far fewer in number and easily identifiable. This distinction is crucial because it indicates the difficulty or comparitive ease with which seismically active zones in peninsular India can be identified.

But Negi, too, emphasises that the validation of his argument would need multi-disciplinary surveys of the Kurudwadi rift. However, his critics point out that seismic analysis should embrace the whole Deccan plateau rather than be concentrated on the Kurudwadi rift.

Gupta says the key to this extensive study would be to shift monitoring stations to sites of suspected underground deformation. "One reason we know so little about seismic activity in the Deccan," he says, "is that monitoring capabilities of the IMD are concentrated almost solely at sites that have experienced earthquakes of large magnitude. It must be realised that energy accumulations in the Deccan plateau take a very long time and the revisitation of an earthquake of similar intensity at a particular site is virtually unknown in the Deccan."

Gupta contrasts this with seismic activity in the Himalaya, where accumulation of subterranean strain is much more rapid. Both he and Gaur comment that such a lopsided approach adversely affects the practice of siesmic zoning in the country. "Seismic maps change after almost every earthquake in India," says Gupta. "Immediately after the event, we mark a circle around the site signifying its higher seismicity in comparison to the surrounding region." The high seismicity of the Himalayan region has distracted Indian seismologists' attention away from potentially seismic zones in the Deccan.


Recognising the merit of these arguments, the Union government announced four days after the earthquake that it would undertake a seismological mapping of southern India. But there was little indication of whether this decision would overcome snags that have hampered previous seismological studies in India.

The Latur earthquake also highlighted the poor state of seismological instrumentation in India. Initially, various IMD monitoring stations indicated grossly varying estimates of the intensity of the quake, ranging from 5.5 to 6.5 on the Richter scale. According to seismological experts, this reflected a lack of standardisation and inter-calibration of equipment. Comments Gaur: "This not only makes us the laughing stock of the world, but also implies that data classification and analysis from various IMD centres was unnecessarily delayed and difficult."

Gaur is a self-confessed crusader for quick introduction of ultra-high monitoring technology -- in the frequency range of 300 to 3,000 megahertz. In contrast, Gupta favours increased deployment of monitoring facilities at existing technological levels. "Our first need is to ensure that we cover the entire country as quickly as possible."

However, both Gaur and Gupta admit seismological studies will have to go beyond the issue of technology -- to professional rigour as well. Last October, after a tremor measuring 4.3 on the Richter scale was experienced at Killari, a team of IMD and GSI scientists was sent to survey the site. Says R N Pali, deputy director general of GSI's central zone office in Nagpur, "We were not able to understand these tremors." Pali also said there was no surface manifestation of faults that caused tremors in the region. Ironically, the Latur earthquake has left no manifestations either.

Another factor that will affect seismological planning is the expectations of the country's decision-makers. Political leaders do not like to be criticised in the aftermath of disasters. Said Prime Minister P V Narasimha Rao about the earthquake, "The Deccan Plateau was believed to be not prone to earthquakes. This belief has been largely shattered." He went on to express the opinion that "southern India has been poorly studied from the seismological point of view." Seismologists may well expect stronger debunking from decision-makers down the line. One direction seismologists will have to pursue is earthquake prediction. There has been much discussion on the success of Chinese seismologists in predicting the Haicheng earthquake in 1975. Though the quake measured more than 7 on the Richter, the death toll was less than a thousand because most people had been evacuated. But the seismologists were not so accurate the next year, when a stronger quake killed nearly 242,000 people in Tangshan.

Despite using the most advanced monitoring equipment, US seismologists had no precise foresight of the California earthquake of 1989, which measured 7.1 on the Richter. So, it is not only Indian seismologists like Gaur who argue that earthquake prediction is still fraught with imprecision. Alice Walker of the British Geological Survey told Down To Earth, "Earthquake predictions are rather like weather forecasts -- they can often be wide of the mark."

Says Gaur, "The key contribution of seismologists should be to indicate the broad pattern of seismological activity over the decades to come." In the light of such knowledge, proper civic planning would allow "adequate anticipation of these hazards, appropriate planning of settlements and regulation of building codes, emergency and relief procedures."

But what lends the killer edge to any earthquake is the unpreparedness of humans. Only one person died in the California earthquake, but some 30,000 people died in Latur.

Indian seismologists plead that their field of study should be equipped to enable safe siting and housing in advance. Though earthquakes can be delayed upto 100 years from the anticipated date, the impact will depend on how wisely the interregnum has been used.

In 1905, a major earthquake rocked Himachal Pradesh's Kangra district, claiming 20,000 lives. The next quake in Kangra is expected by 2010, but it could miss that year by a long margin. Seismologist A S Arya of Roorkee University has already gained credence among his colleagues for forecasting that between 90,000 and 350,000 people in the area will die in case of the event. That tragedy can definitely be avoided.