Government has to revise its policies. But it will have to learn from the civil society 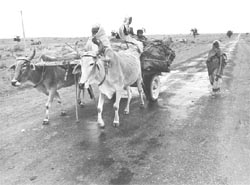 Agreed. The government cannot just do away with subsidies on chemical fertilisers, tractors and diesel. Far too many farmers depend on these. But what keeps the government from promoting livestock as well? “Productivity of the livestock system can be trebled with corresponding increase in rural income. This requires a draught animal power board to promote modernisation of the system,” says N S Ramaswamy.

“In 1929, Mahatma Gandhi announced an award of Rs 1 lakh for anyone who could improve the design of the charka (manual spinning wheel). In our time, this would amount to Rs 2 crore. This is how you promote rural innovation and come up with technology that is decentralised and sustainable. What stops the government to give prizes to those who come up with good designs of carts? Why can’t the government subsidise seeds of good fodder crops,” asks Laxmi Narain Modi.

“Agricultural productivity... depends critically on the development of the draught breeds. For that, unless we raise the prestige and stature of draught animals, we will not be able to fight this battle. It is seldom realised that a major part of food production comes from small farms in rural sector where yields are low. So, even a small increase of about 200-300 kg per farm per crop can give us an additional 250 million tonnes of foodgrain every year,” observed K K Iya.

Batobyal suggests that the government should take a backseat when it comes to breeding livestock and merely support enterprising individuals and civil society outfits to propagate good animals. He reckons there should be prizes and incentives for scientists and field extension workers who succeed at finding good indigenous animals for breeding.

But Nivsarkar’s suggestions are stronger: “Either make the animal husbandry department accountable for their job or entirely privatise livestock planning and management. Most of all, the government needs to overhaul its understanding of livestock management in India. Especially the importance of gobar to the economy and the environment.”

Another important thing. The innumerable religious groups trying to blindly protect the holy cow are actually doing a disservice to their cause. “Mere religious sentiment will not save our animals. Nor will a blanket ban on slaughter help,” says Hitruchi Vijayji Maharaj, a widely respected Jain muni. He is the ideologue of the Viniyog Parivar Trust, an organisation that promotes and funds sustainable development. “There was no need for a ban on cow slaughter under Ram Rajya (the ideal rule of Lord Ram). Because killing such useful animals made no sense at all. Sustainable economic practices, like the traditional lifetyle of Maldhari people, have to be promoted and preserved. We cannot save our animals if we lose gauchar lands,” says he.

Science can also help solve the problem to a great extent. As pointed out by M S Swaminathan, eminent Indian scientist, one answer lies in developing ways to break down ‘lignin’ in crop residue. Lignin is a carbonaceous, pigmented compound found in all vegetation. It fattens up the cell wall and forms part of a plant cell’s protection mechanism. Due to its chemical composition, lignin is not very appetising to ruminating animals. It also hinders breakdown of fibre inside the stomach, points out Anil Lachke of Chemicals Laboratory, Pune. Research is already underway at several institutes in India and abroad to come up with viable technologies to break down lignin. This would greatly increase the availability of high-quality nutrition for India’s livestock without any increase in the use of land or water resources.

The answers are all there, begging the question of India’s ‘unproductive’ livestock. Domestic animals do not pose any threat to the environment. Bad management does. A healthy livestock will be the greatest symbol of a sustainable economy, prosperity and food security. Of successful politicians who have vision. Of scientists who provide solutions. It is not about reverting to a arcadian pre-industrial past. It is about hard economics, politics and a secure future for India.