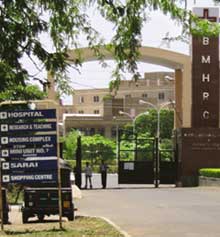 Overruling objections of groups representing Bhopal gas victims, the Supreme Court on May 2, 2006, sanctioned Rs 37.65 crore to the Bhopal Memorial Trust. The trust administers the Bhopal Memorial Hospital and Research Centre (bmhrc) and had demanded the money to ensure better functioning of this institute, set up specifically for victims of the Bhopal gas tragedy. The apex court's ruling came after a year during which the bhmrc was racked by doctors' strikes, and faced allegations of impropriety.

On April 12, 2006, the court took note of some such charges and permitted victims' representatives to scrutinise bmhrc and trust accounts. The investigations revealed that the trust did not maintain an inventory of assets and also did not have details of patients treated at the bmhrc. Besides, funds had also not been transferred to the trust by its earlier London-based avatar (see box: Trust timeline ) But in its judgment, the apex court set aside these objections.


A Supreme Court ruling has kept bmhrc and the trust that runs it -- it's headed by former chief justice of India A M Ahmadi -- out of the purview of a Supreme Court committee that monitors medical rehabilitation of Bhopal victims. Charges of unaccountability are rife. Aziz Ahmad Siddiqui, working trustee of the trust, counters them saying that the hospital submits its accounts to the Supreme Court regularly. But victims' groups allege that the trust submitted its accounts for six years only after their recent demands .

More importantly, bmhrc has done nothing to ensure adequate care for the victims. Though built specifically to give free long-term treatment to gas victims, the hospital, which is the only super-specialty hospital in Bhopal, also caters to other patients who pay for their treatment. In the process, the gas victims are systematically discriminated against. Derided as the giasi s, they are allocated a registration number that sets them apart from other patients. They have to wait longer for medical tests, do several rounds for reports and most often end up without a proper record of the treatment. Gas victims with coronary heart problems are unnecessarily subjected to bypass surgery, simply because it's cheaper. In contrast, other patients with similar problems are treated with the less invasive angioplasty.


The hospital figures for 2005 show that every third patient treated at bhmrc was a paid patient. The management reasons that money from private patients adds to funds for treating victims. Says Akhilesh Argal, a critical care specialist with the Bhopal Charitable Hospital, "There should be a quota for private patients." bmhrc's management says that the hospital does have such a quota, but refuses to divulge details.

It does say that 30 per cent of the hospital's profits go to consultants, 10 per cent is given as bonuses to the staff and the rest is earmarked for maintaining hospital infrastructure. But irregularities abound. According to hospital records around 1,000 private patients have not paid their dues.


Such cases of financial misappropriation and discrimination against gas victims came to the fore when bmhrc's doctors and supporting staff went on strike in April, 2005. Though their main demand was better pay, the striking doctors spilled the beans on malpractices, which the victims had long alleged. They also had issues against consultants pocketing a part of the amount received from paid patients. But the management feels this is the only way to attract good doctors. However, the fact remains that the consultants are not really interested in treating non-paying patients. Moreover, the hospital has failed to recruit sufficient doctors to deal with the rise in the number of patients. In 2001, 23,350 gas victims consulted the hospital as outpatients. By 2005, their number had increased to 94,972. In 2001, 1,984 gas victims were admitted to the hospital, their number rose to 5,757 in 2005. 1,163 private outpatients consulted bmhrc in 2001; their number went up to 12,717 in 2005. That of private inpatients went up from 477 in 2001 to 2,319 in 2005. The major load of this rise fell on senior doctors. While bmhrc' s management refused to provide data on vacant posts in the hospital, figures provided by local ngos show that while in 2000 there were 198 nurses, 63 senior residents and 21 junior residents, their numbers had fallen to 98, 25 and 28 respectively in 2004.

A headcount done after the end of the strike shows 12 vacancies in the anaesthesia department and 8 in the cardiology department. The departments of nephrology, microbiology, psychiatry and transfusion medicine have no senior residents. The management, however, is not worried about the shortfall. It reasons that senior and junior doctors constitute a floating population. But, the hospital does not even have the requisite consultants. The nephrology department has one consultant instead of three. When he took leave recently, the onus of care fell on less-qualified doctors. So, 20-year-old Shanu, who recently took his mother Hasina Bi for dialysis, had to sign a document saying he had no problem with juniors treating his mother. Hasina also had a heart problem for which she was referred to the cardiology department, but she has not been examined, because the only consultant there is also on leave.

The bmhrc has also floundered on another of its objectives: research on the long-term effect of exposure of mic -- the gas that leaked from Union Carbide's Bhopal factory. Satinath Sarangi, of the ngo Sambhavna Trust, a trust that provides treatment to the Bhopal survivors says bhmrc's research centre does not even have a committee on research ethics. Protocols for treating those exposed have also not been devised, he adds. The result: no research paper has come from bmhrc, though the hospital's annual budget for research is around Rs 5 crore. During the strike, the agitators had alleged that the hospital's director-general, Indraneel Mittra, has diverted research funds into studies on breast cancer, a field in which he has personal interest, but one which does not have any relevance for gas victims.


The hospital had to be closed down twice following en masse resignation by the strikers: first in July 2005 and then in December. Experts decried the move, while bmhrc' s management felt that the staff had no reason to complain since they were paid more than their counterparts in the state. But a nursing supervisor, says, "We are entitled to higher remuneration since bmhrc is a super-specialty hospital". Mittra counters, " T he employees had demanded central government scales, but they are contract workers, not eligible for such scales. Central government workers do not get benefits or increments like those being given to the bmhrc employees. If central scales had been implemented, some would have ended up getting less than what they were getting now. "

After the strike commenced, the hospital had to be closed to protect the property from the agitators, says Mazhar Ullah, bmhrc's public relations officer . But health professionals in Bhopal differ. C C Chaubal, a private gastroenterologist says, "Closing down the hospital was unacceptable. The management should have sought help of health professionals from the rest of country." Argal says the lack of qualified hospital management personnel compounded problems. Sadhna Karnik, a Bhopal-based activist alleges that the management used the good offices of the prime minister to force the doctors end the strike and sign an apology letter.

The strike, however, served to highlight the problems that bedevil the hospital. Its management must be streamlined for the gas victims to get quality care on demand.