The battle for a strong Lokpal

Home |
Indepth
| The battle for a strong Lokpal 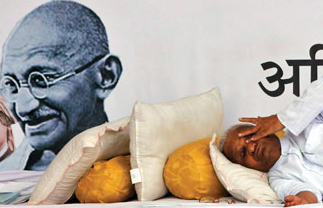 The stage is set for another showdown between Anna Hazare and the ruling UPA alliance at the Centre. As the Gandhian began his three-day fast in Mumbai on December 27 to press for a strong Lokpal Bill, the Lok Sabha began to debate the bill with the opposition Bharatiya Janata Party (BJP) tearing into the bill, saying it is flawed and unconstitutional. The Lokpal bill envisages setting up an independent ombudsman who would have the power to investigate and prosecute politicians and civil servants.

The government maintains the Parliamentary standing committee on the Lokpal bill has struck a fine balance between the Lokpal, the Central Bureau of Investigation and the Central Vigilance Commission to check corruption and that no changes are required.

BJP plans to move as many as 37 amendments, including an enabling provision for appointing state lokayuktas, because the party feels the bill is against the federal structure of the country as provided by the Constitution.

The initial friction between anti-corruption activists and the Union government over the anti-graft Lokpal Bill has metamorphosed into an all-out war between the government and non-government groups. The polarisation is getting sharper. Most political parties have joined hands with the ruling alliance to oppose the “legitimacy” of non-government groups in taking part in legislative affairs. The confrontation has raised many questions.

These questions cannot be answered with a simple yes or no. The crisis is an outcome of the post-liberalisation churning taking place. In the past 20 years, the state has undergone changes and comfortably settled its relationship with the market. The government is reducing its role in development works, leaving space for non-government players. The private, for-profit companies are entering the health and education sectors through private-public partnerships. Non-government, not-for-profit organisations are also rediscovering their roles.

Subjects that NGOs dealt with as social contractors have now extended to the Panchayati raj institutions. That is why NGOs have started reinventing themselves into groups advocating for rights and empowering legislation. But elected representatives see this as a threat to their mandate. Read more on this transformation as India marks 20 years of liberalisation .
Hide All