The salt of the earth

Moves are afoot to convert the brackish Pulicat lake into a freshwater one to supply water to Madras city and authorities seem to have little regard for the ecological and environmental consequences. 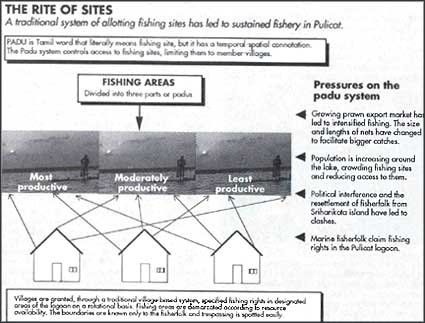 EVERY DAY at 5 am, Sridevi picks up all the pots in her house in the Mandaveli slums of Madras city and places them at the end of the street, as she has been doing for the past 12 years. She must ensure that her pots are among the first in the long queue that forms as the morning goes by so that she can avoid the pushing and shoving that occurs when the water tanker arrives to distribute drinking water.

At about the same time, 55 kilometers north of Sridevi's home at Pulicat town on the edge of India's second-largest brackish water lagoon, Manoharan sets out on his thoni, a flat-bottomed boat, to catch fish and crabs, a vocation that has sustained generations of fisherfolk like him.

The disparate lifestyles of both Sridevi and Manoharan could change drastically -- and irreversibly -- in the not-too-distant future if the Tamil Nadu government goes ahead with a plan to convert Pulicat lake into a freshwater one to provide drinking water to the chronically water-starved city of Madras. Sridevi would only have to turn on a tap to get her water, but Manoharan would be left in the lurch without a source of income and be rehabilitated elsewhere.

Pulicat lake, covering an area of about 460 square kilometres, runs parallel to the coast along the Bay of Bengal, separated from it by just a narrow strip of sand called the Sriharikota "island". The lake is generally shallow, with an average depth of 1.5 m. Three small rivers open into it and the lake empties into the Bay of Bengal at its southern end through a shallow, narrow mouth about 200 meters wide.
Madras engineers hope to convert Pulicat into a freshwater lake by putting up two barges or dykes 300 to 400 meters long at each interface of the lake with the sea in a Rs 20-crore project. For the past four decades, Madras city has faced a perpetual water shortage and successive governments have grappled with the enormous task of providing water to the city's 4.5 million people, by trying to evolve various schemes .

According to water experts, by 2011, the city would need 1.2 billion litres of water a day but would have only 1.02 billion litres available, even after the much-awaited Telugu Ganga project is implemented. Small wonder then that the officials of Madras Metropolitan Water Supply and Sewerage Board (Metrowater) have latched on to any idea that even remotely suggests a solution.

Explaining the need to look at Pulicat Lake as the city's water tank, S Srinivasan, director of engineering at Metrowater, says, "There is a constant complaint against us that we haven't been looking actively for a source (of water) that is exhaustive, perennial and close to Madras. The Pulicat proposal is a step in that direction."

However, this "step" has already caused considerable unease and anxiety among some fisherfolk of Pulicat and certain sections of the government and non-government sectors in Madras. This unique wetland ecosystem supports a very rich and diverse biota and acts as a breeding ground for several species of bird and marine life.

White and tiger prawns -- species of great export value and characteristic of brackish water fisheries of south east Asia -- are found in Pulicat. It is also famous for mud crabs and oysters. It is a wetland declared by the Ramsar Convention to be preserved for migrant water birds, including flamingos.
One of the first to react and staunchly oppose the conversion scheme was P J Sanjeeva Raj, a professor of ecology at the Centre for Research on New International Economic Order (CReNIEO) in Madras. Says Raj, "The whole natural system is stabilised towards a saline ecosystem. Tampering with this unique and fragile habitat is going to lead to the total destruction of the natural ecosystem, its resources and the lives of the indigenous people dependent on it."

He adds that disconnecting the sea to covert the lake not only prevents the exchange of water, oxygen, nutrients and plankton, but also the outward migration of breeding prawns, crabs and fish and the inward migration of their eggs, larvae and juveniles.

Apart from the ecological hazards of effecting such a conversion, the project will also directly affect the 52 villages around lake. From ancient times, Pulicat lake has been a major fishing centre. According to one study, the export of prawns fetches Rs 90,000 to Rs 1,20,000 daily for the fish merchants. Prawns provide vital foreign exchange and job opportunities for 30,000 fisherfolk directly, 20,000 agricultural labourers during off-season, traders and prawn merchants indirectly. It also supports 2,50,000 people.

Rajashekar, a fisherman of Kottaikuppam village on the southern end of the lake, asks, "How does the government intend to provide alternative jobs to these multitudes who have no knowledge of skills other than fishing? It is impossible to rehabilitate so many."

Rajashekar's doubts are not without reason, having already experienced one rehabilitation when 13 villages were evicted from Sriharikota island to make way for the satellite launch facility. These villages were shifted to the already congested mainland, upsetting the delicate balance of the intricate system of fishing rights and territories (See box), creating tension and clashes among fisherfolk, which even lead to nine deaths in 1987. Even today, the underlying unease is manifested in the constant presence of a police picket.

The project managers will have to deal with many tricky questions. People question the wisdom of attempting to block the mouth of the lagoon. During the 1984 cyclones, the torrential outflow of flood water opened up six or seven new mouths for the lake, without which, they claim, several villages on the lake margins would have been inundated.

Besides, the issue is also an inter-state one because two-thirds of the lake lies in Andhra Pradesh. Asks Lawrence Surendra, a Madras-based social scientist, "How long will the people of Andhra Pradesh tolerate the incessant and irresponsible demands of Madras city? Surely they would use the freshwater reservoir for agriculture and irrigation purposes? Are they (the government) planning to police the area or what?"

Raising a piquant point, Arivaghazan, coordinator of the Pulicat integrated fisherfolk development project run by CReNIEO, says, "Next, they will prohibit fishing in a water body that is meant to be used for drinking water."

Responding to some of these queries, Metrowater's Srinivasan merely deflected the issue, saying, "It is too early to talk about ecological and environmental impact. But we are sensitive to these issues."

Referring to a study being taken up by Metrowater with the assistance of a UK firm, Mott McDonald, to assess the engineering feasibility of the project, Raj counters: "It is no longer merely an idea, given the interest being shown by the officials. One has to watch every move carefully or before we know it, they might slip it through under our noses."

Trying to understand the genesis of such projects, Surendra comments, "This (Madras) is a city run by bureaucrats. There is no elected municipal body and hence various boards rule the roost, not being accountable. All bureaucracy thinks alike and therefore most projects are conceived in an ad-hoc manner, setting no financial limits and hoping to be funded by outside agencies like the World Bank. Bureaucrats come and go, leaving behind the legacy of their ill-planned 'development ideas' for their successors to handle."

Given that between 1978 and 1990 Metrowater had 13 managing directors, Surendra has reason to be apprehensive about their planning strategies. Criticising the ways of the government, Kavita, legal coordinator for the Consumer Action Group, laments, "Their urban planning policies are leading to the future degradation of existing wetlands around the city that retain rainwater and help recharge groundwater. One of the major culprits is the Tamil Nadu Housing Board, which is building on lake areas."

With depleting groundwater and continued saline water ingression, the woes of Madras' residents are being further compounded. Ironically, Madras is in a region that receives about 1,400 mm of rain annually.

Advocating the merits of considering rainwater harvesting as a possible cure to the crisis, Nirmal Sengupta, a professor at the Madras Institute of Developmental Studies, says, "It is a radically different concept and will take time to percolate into policy and planning levels. Seeing the success of countries like Israel, we have already developed considerable expertise on rainwater harvesting. Besides, the acute crisis is forcing rapid changes in attitude."

Such an attitude was developed much earlier by people like K R Gopinath, an industrialist who, by trial and error over the past eight years, devised a way of collecting rainwater and draining it into the well in his house. This cost-effective and simple method has caught the imagination of Metrowater officials, who have issued directives making it mandatory for all new buildings and high-rise apartments in the city to install rainwater storage systems.

However, officials are not entirely convinced that rainwater harvesting techniques alone can meet the huge shortfall in water supply. Madras city needs 55 million gallons of clean water per day, but only about 19 million gallons are available.

Which is probably why engineers and water experts still feel the need to look at external sources like the Krishna waters and Pulicat lake to provide succour. "The need of the hour," says K Rajaratnam, director of CReNIEO, "is to take this issue out of politics because successive governments have used the water crisis to their advantage. I hope project proposals like the Pulicat lake conversion one remain political paper tigers!"

As officials and planners debate this urban development dilemma, Subramani of Edamani village near Pulicat lake makes a caustic comment, "Whoever asked all those 4.5 million people to go and live in a congested area, destroying their existing natural resources first and then ours? It may be the government's job to provide water to them, but it is also the government's task to protect our interests."