The Central Public Works Department has banned the use of wood in its construction projects, ignoring the fact that the substitutes are more ecologically harmful and mainly depend on non-… 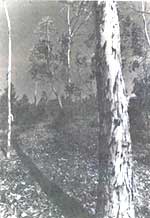 WOOD is out, and matt or glossy steel and plastics are in, as far as the Central Public Works Department (CPWD) is concerned. In line with the government of India's decision to promote wood substitution, the ministry of urban development has instructed CPWD to ban the use of wood in construction work and shift to substitutes, in view of "the depleting forest cover, resulting in ecological degradation".

Banning wood is, however, hardly the best solution to depleting forest cover. At its most humane, it is a tangential slide away from the problem and a vacuously short-sighted approach to conservation. This approach does not take into account that most of the substitutes that have been lined up -- steel, aluminium, PVC, ferrocement, glass fibre, reinforced plastic, cement-based particle boards, expanded polystyrene, red mud polymers, medium density particle boards, rubber and eucalyptus -- are more ecologically harmful than wood. Taking it further, the no-wood policy could discourage reforestation efforts by reducing incentives to grow trees.

The majority of the substitutes depend on non-renewable sources of raw materials, with polluting, energy-intensive and carbon-generating methods of production. Iron and manganese ore is needed to produce steel, bauxite is needed to produce aluminium, limestone for cement and petroleum for plastics. Besides, expanding the market for any of these products would merely ensure a rise in the procurement costs of these resources, which will get depleted faster.

An amazing amount of energy is used in the manufacture of aluminium and steel. To produce 1 tonne of soft wood timber, only 2.91 million British Thermal Units (BTU) of oil equivalent is needed, while the production process of a 1 ton concrete block uses up 8.77 million BTU of energy. The production of the same quantity of steel sheets consumes 50.32 million BTU -- more than 17 times the energy needed for soft wood timber. And, to produce 1 ton of aluminium sheets, 200.47 million BTU is required -- almost 69 times the energy needed for timber.

The production processes of these metals, including coke making, metal extraction, refining, casting and finishing, also cause atmospheric and water pollution. A study conducted by the Wood Science Laboratory in the US reveals that for every million cubic metre of wood-based panel products replaced by a non-renewable panel product such as steel, aluminium and plastic, will not only entail additional inputs of about 1,200 million litres of fuel oil, but will also increase carbon dioxide emissions by 7.5 million tonnes. Petroleum is also used in the manufacture of plastics. These considerations do not seem to weigh heavily on the minds of CPWD officials. D P Goyal, the superintendent engineer of CPWD's Technology Application and Development Cell, says, "We are not interested in the manufacturing processes of the substitutes."


Another problem is that the procurement of the ore leads to rampant deforestation. Most ore deposits, especially iron and manganese, are found in forest areas and trees have to be cut down not only to access the ore, but also to set up surface installations needed for the mining process. Roads, railways and ropeways have to be constructed for mineral transport and townships have to be built for the people employed at the mines and stockyards.

Besides, iron ore, manganese and bauxite are obtained from opencast mines, which erode the land, resulting in landslides and flooding. The value of the mined land declines. The residents of the area are affected by the fine ore and toxic substances that are carried to watercourses in the vicinity, making the water unfit for human use. Further, disposing of mining debris also requires additional land.

The devastating effect of such ventures is evident in central-eastern India, the country's mining heartland. Mining operations in this ecologically-sensitive region have destroyed the land and forests, adversely affecting the tribals who live there. A report on an eco-development plan for Goa, prepared for the Planning Commission, states that "on an average, 2 tonnes of reject material is required to be removed for every ton of saleable (iron) ore" that is mined.

Taking recourse in substitutes has wider implications. Policies that ban the use of wood reduce its commercial value and thus the incentive for growing it. This could discourage afforestation efforts, and encourage people to turn forests that have hitherto provided timber to non-forest uses.

The effect of government policy on afforestation efforts is already apparent in West Bengal. The government has been encouraging imports of logs and pulpwood. Custom tariffs on these products have been reduced and they have been included under the open general licence. According to N C Saxena, director of the Lal Bahadur Shastri National Academy for Administration in Mussoorie, this has caused sal prices to fall by 25 per cent in the past 3 years in south-west Bengal, raising the hackles of the village forest committees which had been protecting sal forests in the hope of earning good incomes.

Besides, while the liberal import policy has reduced the pressure on the country's forests to some extent, the import of timber cannot be a long-term strategy. Hardwoods are mostly imported from tropical countries like Malaysia, Burma, Indonesia, Brazil, Papua New Guinea and Vietnam, most of which are threatened by massive deforestation.

It has become increasingly evident that afforestation efforts can only be successful if people have incentives grow trees. So far, only monocultures like eucalyptus, poplars and wattle have found favour because the profits come in faster from these rapidly-maturing trees. They fulfill fuelwood needs and serve papermills and rayon industries, which use pulpwood.


However, they can hardly replace indigenous hardwood forests, which provide more than just the wood -- in the form of minor forest produce and a habitat for wildlife -- and form the natural vegetation in existing forest areas. The construction industry has created a demand for hardwoods like sal and teak, which have been planted as long-term commercial ventures. What is urgently needed is research on faster growing species, which can fulfill the timber needs of the construction industry.

Another factor that has to be taken into consideration before shifting the emphasis to substitutes is that the wood industry is labour intensive and provides jobs to people in rural areas. Shifting to substitutes means diverting funds to industry and encouraging urban migration. "In effect, the industrial lobby is cashing in on the wood crisis, and the government is helping it peddling products that are more environmentally harmful," says architect Revati Kamath. "By industrialising even the production of doors, the government is diverting money from the artisan to industry." It will be difficult to rehabilitate skilled labourers who are familiar with only wood work, Kamath adds. Besides, the substitutes cannot match the versatility of wood. Architect Anil Laul points out that wood is a natural insulating material for both heat and electricity and has a low thermal coefficient compared to steel and aluminium, which are easily affected by temperature fluctuations. It is also a better sound absorber. It can be easily cut, ripped, planed, bored, drilled and moulded. Steel, aluminium and plastic require gas cutting, electric hacksaws and drills. Joints in steel and aluminium have to be welded and riveted. While in the case of aluminium, this requires special tools, steel joints are heavy and cumbersome. Steel also corrodes unless it is given a layer of paint, and it cannot be used in places where it will be constantly exposed to water.

Keeping in mind CPWD's methods of working, the door frames and shutters will have to be manufactured in sets, as doors made out of these substitutes cannot be cut into odd shapes to fit uneven door frames. CPWD's experience with using readymade metal windows in the past has not been a happy one, says its chief architect, Jeewan Kothari. Often, because of lax production standards, the shutters do not fit the frames and hence cannot be shut properly.

To overcome this problem, timber experts at the Commonwealth Scientific and Industrial Research Organisation in Australia have developed a "superior wattle" that grows straight. The experts claim this wattle, Acacia auriculiformis, has teak-like qualities, with the strength and durability of tropical timber. It provides high-quality timber in 15-20 years, does not require fertile soil to grow in, suppresses weeds because of its dense foliage and can withstand up to 6 months of drought. However, caution must be taken before importing any more fast-growing exotic species and their impact on the environment and sustainability has to be carefully evaluated.

The substitutes are also more expensive than wood. A seasoned and treated hard wood door panel, for example, would cost about Rs 6.50 per square metre. An aluminium door would cost Rs 13 per sq metre and a plastic door would cost Rs 12.07 sq metres. Plastics and red mud polymer, listed as a filler for door shutters in the CPWD's substitute list, present an added problem. They release highly toxic gases on burning. Yet plastics are being promoted as a fire-resistant material by the CPWD.

The list of substitutes also includes medium-density particle boards and plantation wood such as eucalyptus and poplar. The medium-density particle boards use agricultural or wood waste bonded with urea formaldehyde, another petroleum derivative. According to Goyal, the maximum thickness they have been able to achieve with these boards so far is 40 mm, making it unsuitable for door frames. Laul also questions the water resistance capacity of these medium-density boards. While they have been marketed as a product which can withstand even boiling water, Laul contends that they cannot withstand hot-cold differential heating.

Eucalyptus and poplar, on the other hand, have been found unsuitable for long-term use. Eucalyptus is termite and fungus prone and cannot be easily treated because of its non-permeability. Also, most of the eucalyptus available in the market does not have the requisite girth for use in construction, because it has been harvested in a 6-year cycle, before the trees begin to grow thicker.

Besides, it was difficult to saw eucalyptus into planks as it cracked easily, making it unsuitable for use in buildings and furniture. The Forest Research Institute in Dehradun, however, claims to have solved the problem. It says that the logs would not crack if they are sawn radially. But radial sawing is not economical for logs with a girth of less than 1 metre, and it takes 25 years for the tree to grow to this size.

Instead of taking refuge in a substitution policy, the government should realise that wood is the only resource that they can use and yet replace. According to Saxena, the 10 million tonne shortfall in supply of timber and pulpwood can be met from an area of 2.5 million ha, even with as low a productivity as 4 tonnes per ha per annum. If the available 36 million ha of degraded forest land, an equal area of marginal and semi-cultivated farm land and 13 m ha of village lands were to produce timber and pulpwood, the demand would be more than met.

Whoever said that the government wasn't wooden-headed was wrong.