THERE IS NO JUSTICE

Home |
Indepth
| THERE IS NO JUSTICE

E VIJAYALAKSHMI and RUHANI KAUR travel around Padre village, Kasargod district, Kerala and find what living with endosulfan has done to the area and its people 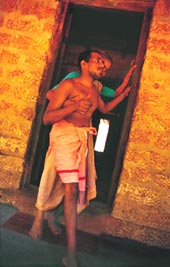 At Padpu, Padre village, Kasargod district, Kerala, there is a ritual every November to honour the snake god. Many in the area also believe that the ritual celebrates the origin of the Kodenkeri thodu (stream) in a patch of sacred forests near Padre, right beneath the cashew plantation-rich hills of Kasargod. The association between the venomous snake god and the stream is perhaps a part of the village's centuries old folklore. But since 1976, the people of Padre link the stream with a different sort of poison: endosulfan. That year, the Plantation Corporation of Kerala (PCK) decided to get rid of pests on its cashew plantations by aerially spraying this lethal pesticide. Endosulfan was absorbed in the soil and the stream carried it along, severely scarring the lives of many along their banks. The waters of Swarga, Pathadka and Badiyaru -- other streams extensively used by Padre's residents -- were also rendered toxic.

Narayan Bhat -- a karada Brahmin, originally from Maharashtra -- lives with his family on a little mound overlooking the Kodenkeri. His 35-year-old sister Girija and nephews Vishnu Bhat, 20, and Vishnu Prasad Kulkarni, 18, suffer from epilepsy and have varying degrees of mental retardation. Bhat's parents died a decade ago -- mother of uterian cancer and father of mouth cancer. His sons have fortunately escaped -- so far. Sumathi, Bhat's wife, tends the sick; her ailing sister-in-law helps her with kitchen chores such as cutting vegetables and washing utensils. "Girija can understand and obey simple instructions and she even cooks," says Sumathi indulgently.

At our request, Girija quickly brings out her medicines and sits clutching them tightly. They are very precious; on an average, her bother spends Rs 1,000 every month on them. With just 0.81 hectares of land to fall back on, Bhat is a hard-pressed man. Last year, he received Rs 1,500 as donations collected by local activists. But no help has come from the state. Last year, the three endosulfan victims in his family were issued disability certificates by the health services department of the state government, but free medicines were made available to them for just three months: October, November and December 2003.

There are many in Padre whose sufferings are similar to Girija. Says Jayagovind Ukkinadka, an Ayurvedic practitioner from Perla, a nearby town, "The severity of epilepsy attacks is very high in the village. There are also so many cases of cancer, renal failure and embryonic disorders."

The situation is even bleaker a little down the Kodenkeri, where 25-year-old Kittanna, who belongs to the Bunt community, lives. He is a victim of cerebral palsy. His brother Sridhar is similarly afflicted, though he can walk a bit. "Who will look after my children when I am gone?" laments Shinappa Shetty, their father. Kittanna's mother worked as a casual labourer at the PCK plantation for more than 10 years. Though she quit this job a few years back, Shetty associates his children's illness with his wife's work. "Such an illness never happened in our family till my children were born," he says.

Kittanna was presented with a wheelchair by some well-wishers, a year back. It is of no use. "Where will we wheel and take him?" asks his father. It's a valid query, for the entire area is undulating terrain. And the stream, hemmed in by gardens on both sides, barely offers enough space for a person to walk, leave alone wheel a person along.


Though they are heavily contaminated, the people of Padre cannot banish the streams from their lives. Vishnu Bhat, for instance, regularly walks down to the Kodenkeri to wash his clothes, though always under the watchful eyes of Sumathi. Check dams built along the length of the streams testify to their usage for irrigation purposes. Many even have their drinking water wells right next to the contaminated water bodies.

The more fortunate ones such as Narayan Shastri -- another karada Brahmin -- have access to surangam or tunnel water, tiny rivulets which flow out from the hill face. "But this water is also contaminated since it originates from the cashew hills," says Shastri with a look of resignation. Though his family rarely 'goes' to the Kodenkeri for washing, they pump its water to a large pond nearby where they bathe, swim and also use the water to irrigate their areca nut, fruit and rubber trees. The 16-member joint family has not escaped the consequences. All of them suffer from allergies. Narayan Shastri's nephew is epileptic while a few others suffer from asthma.

"After each spraying, the fish in our pond would die," reminisces Hiranyagarba Shastri, Narayan Shastri's brother. And with repeated spraying, the fish and the frogs just disappeared from the streams. Moreover, because spraying invariably coincided with the flowering season, it interfered with pollination. The result: honeybee activity was severely curtailed.

Animal deformities have also been noticed though they are not very common today. B Padmanabha Pai, an animal doctor in Perla has handled more than 15 cases of calves born with severe deformities. "Most of the affected cattle used to graze around the plantations," he says.


Koragappa Rai, of Kote locality, just below the plantations remembers that the spraying was "like a shower accompanied by fog." "The medicine would just flow down into my pond," he recollects. "The PCK would sometimes warn villagers before spraying. Sometimes urea sacks were given to cover the water bodies. But these did not prevent the pesticide from entering our ponds," says Rai. His wife died of a malady, which the doctor described as a "Parkinson's like disorder," two years ago. Two of his daughters are also no more: one died of anaemia a year ago; the other was a victim of liver disease five years back. "After each spraying, Rai's daughters would faint," remembers Sripathy Kajampady, a doctor and activist. Rai's son has been married for the last 20 years, but he doesn't have children. Infertility is another major problem in this region.

But what is worse is a sound mind trapped in a deformed body. Sheelavathi of Beejathakotte is one such sufferer. From her small neat room, she can see people coming down to her house and going away. Her own limbs have atrophied after more than 25 years of non-use. Just a second standard student when she collapsed one day, Sheelavathi has not used her limbs ever since. She is barely 2 feet tall, her wasted body unable to match her bubbling spirit. Her mother Devaki does daily labour to fend for the two of them. While Devaki is away at work, she locks Sheelavathi behind leaving a rusty sickle and a stick for her daughter's safety. What does she do the whole day? We ask Sheelavathi. She just giggles in response. "A radio," suggests Mohan Kumar, the local doctor, accompanying us, "might keep her occupied for some of the time, while her mother is away" -- small solutions for insurmountable problems.

Guruva of Sajjangadde locality has no such solutions. His two grandsons have been severely affected by the village's endosulfan sprayed atmosphere -- one has severe allergies and the other is almost completely blind. His blind grandchild can be cured, he has been told. But that requires spending couple of lakh rupees -- an unthinkable sum for this poor dalit with virtually no regular source of income. Do miracles happen? he asks with a look of resignation on his face. All the while, the children just cling on to their mother.

The burden of tending the sick has fallen upon Padre's womenfolk. Avvabin, mother of 18-year-old Mohammed Basheer, knows what it is to take care of a child with "permanent impairment of intelligence," as Basheer's disability certificate describes him. Basheer is physically fine. But he is a wasted individual otherwise. "Though we applied for the disability pension two years ago, it has not come through yet," says his mother.

Ten-year-old Anil Kumar, who has a serous heart problem, is also looked after by his mother, Girija -- herself an asthamatic, who spends Rs 200 every month on medicines. Anil, a bright boy with inquisitive eyes, stays near the Badiyaru stream and is active to the extent his heart allows him to be. Local philanthropists and activists such as Shree Padre are wondering about ways to get the funds required for his surgery.


Endosulfan spraying stopped three years back. Today, there are small signs of revival in Padre's ecosystem. For example, honeybees came back this year to Narayan Shastri's house. So he hopes to get at least 2-3 kilogrammes (kg) of honey from one box. Adds Ukkinadka, "Three years ago, I couldn't get more than five kgs of honey from this region for my medicines. But today I manage about 150 kgs in a matter of days." Says Shree Padre, the "revival of beehive economies is a good indicator of nature's regeneration."

The Kodenkeri stream held out the first signs of hope; over the last few months people in Padre have noticed that the fish and frogs have come back to the stream. But the revival has not washed off the dejection amongst people in Padre. "There have been more than eight committees to study our problem. Sometimes we feel we can put up with endosulfan, but not these committees," says Shree Padre.