There's more to trees than timber

New thinking on forestry management calls for reducing the emphasis on sustainable timber production and concentrating instead on the protection of countries' ecosystems. 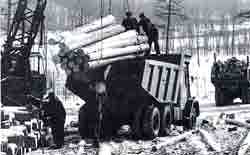 Which is better: a forest where trees and plants grow wild and free or a plantation of one or two species of trees, lined up neatly? Forests in their natural state are generally regarded as useless and chaotic whereas orderly plantations are considered to be "sustainably yielding" for logging.

The accepted practice of forestry, which originated in northern Europe, has historically been a way of increasing the efficiency of timber extraction from forests, as well as improving the quality and quantity of wood. If one word could describe the thinking that underlies official forest management practices that have been followed in several countries, that word might be simplification.

Whether by selective felling of large, old trees or by clear-cutting or whether by spraying herbicides on undesirable species or creating monoculture plantations of desirable ones, the emphasis of northern European forestry has always been to simplify -- to make the resource produce more timber.

Public debate about forest management has been raging since the mid-1980s and may eventually lead to a radical change in the way boreal forests in the Nordic countries are managed. Though the Swedes and the Finns are sitting on the threshold of a total re-thinking of the old Scandinavian model of large single-species tree plantations, the practice is spreading throughout the tropics.

Proponents of forestry plantation are "selling" the idea, claiming that Sweden and Finland are examples of the theory successfully put into practice. It's not hard to understand why. In countries without snow -- where 18o C is considered a cool day -- harvesting rotations can be as short as five years, compared to at least 80 years in the Nordic part of the world. State forestry agencies in tropical countries are moving swiftly to imitate the lucrative Nordic example, paying little attention to the possible ecological or social effects.

This trend has provoked considerable critical discussion in several tropical countries mirroring, in some ways, debates in northern Europe. If anything, because of the enormous complexity of tropical ecosystems and the diversity of human cultures living in and around the forests, these discussions have added new dimensions to the debate.

Three men who have spent most of their lives studying forests and arguing for more ecological forest policies in their respective countries, have revealed interesting perspectives on forestry thinking. Considering that they come from countries that could not be more different and they had never met before, their outlooks are remarkably similar. Olle Zackrisson of Sweden, a professor of forest ecology at Umea University, Ricardo Carrere, a forester by training and a researcher at the Third World Institute in Montevideo, Uruguay, and Weerawat Dheeraprasart, chief of the Thung Yai Naresuan wildlife sanctuary in Thailand, which was designated as a UNESCO World Heritage Site last year, are the three men who are trying to change current forestry management practices.

Zackrisson, a forest biologist, was amazed at how fellow scientists and foresters in the tropics viewed Scandinavian forestry. Having spent the better part of two decades trying to counteract what he considered the devastating ecological effects of Swedish forestry practices, he often despairs to hear his country referred to as an example of "successful" forest management.

Says Zackrisson, "I feel so sad that we've exported this silviculture to other countries and people seem to believe it's the most modern thing. If we had applied this technique over the past 150 years to a tropical environment -- in Thailand or wherever -- and cut more than 97 per cent of the natural forest to set up plantations, it would have caused an even worse reduction of biological diversity than we have in Sweden today."

Zackrisson has no quarrel with the claim that Sweden and Finland are world leaders in timber and pulp production and that the forestry industry is largely responsible for these countries' growth. His concern is that all this has been achieved through radical manipulation of the forest ecosystem and its replacement with plantations of one or two tree species. As a result, dozens of life forms have lost their habitats in Sweden and many may soon become extinct.


Echoing Zackrisson's critique, Carrere says he was trained to see native forests as "useless" and "messy" things that had to be "improved" and "upgraded" by foresters. "We had to convert them into real, useful forests like the ones that grow in France and the other European countries...with one or two species!" says Carrere. "Underlying the thinking is the fact that foresters consider the forest as wood and nothing else. So you had to produce the highest quality wood in the shortest period of time."

Carrere notes that when the Europeans arrived in what is today called Uruguay more than four centuries ago, approximately 6 per cent of the land surface was covered with forest. Today the area has about 3 per cent forest cover. Says Carrere, "The point is that this is not primarily a forest ecosystem. Uruguay is mostly grasslands, so tree-planting cannot be called re-forestation."

This raises intriguing questions that could expand the forestry plantation debate beyond impact on forest ecology: Is a forest (or tree farm) better than other landscapes? What are the ecological functions of the grassland ecosystem and what would be the impact of its replacement by trees? How would this affect the soil and the water?

"People assume trees are always good, but in fact, no one knows the impact," says Carrere.


Foresters throughout the world seem to think they have a monopoly on forest knowledge. They consider forests their exclusive domain and presume they alone have the expertise needed to make decisions on how to use them. Foresters in the tropics, where land conflicts have been most intense, have shown particular reluctance to negotiate with -- much less bow to -- the demands of forest people and farmers.

Perhaps this is why many foresters in Thailand, as in Uruguay, have resisted the growing din of criticism from the public about the way the country's forests have been managed. Thailand's Dheeraprasart, a forester himself, is an exception. An environmental activist from his student days, Dheeraprasart suspects this attitude is inculcated by the forestry education system.

Says Dheeraprasart, "When I was studying (in Thailand in the 1970s), our professors actually warned us against picking up influences from outside the forestry faculty. They were afraid we would pick up 'false information'... So many times I hear them say that people who have not studied forestry have no right to comment on forest issues. But this is wrong. Forests are everyone's business, especially of the people who live nearest to them."

Like Zackrisson and Carrere, Dheeraprasart is an active player in national forest policy debates and a vocal critic of conventional forestry thinking in his country. But if Zackrisson has called for widening of perspective from wood production to the many other biological values of the forest ecosystem, Dheeraprasart's vision pushes the boundaries of forestry even further.

He agrees that the adoption of forestry systems originating in the cold northern climes exacerbates bio-diversity depletion. Conventional forestry in Thailand, as it was practiced for 93 years, placed too much emphasis on wood production, with deleterious results for non-timber flora and fauna.

"Our curriculum was based entirely on Western principles. We took it all, lock, stock and barrel. First they took out all the big trees. Then, they would clear-cut and re-plant with one single species in place of the forest. That's what they do in cold countries. There they can get away with it because of the climate, there is precipitation all year round. And there are so few species of trees in the first place," he says.

But forest battles in Thailand are fundamentally different from those in Sweden in at least one important way. Concern for the last bits of natural boreal forest in Western Europe is more or less "intellectual" -- whether stemming from scientific ideas about biological diversity or romantic ideas about wilderness or ethical principles about the right to life of non-human beings. However, in countries like Thailand, many of the people in the frontlines of forest defence are those whose lives and cultures depend on the forest ecosystem.

Logging by the "sustained yield" system never worked in Thailand because, according to Dheeraprasart, it just doesn't fit with the reality on the ground. That reality includes the millions of people living in or near forest lands without land tenure. Forest depletion in Thailand has followed a general pattern of clearing, first by state or commercial interests using selective or clear-cutting -- legally or illegally -- and subsequently by landless farmers who move deep into the forest along logging roads. Deforestation of this type has usually been both efficient and irreversible.


"Local people have a tremendous knowledge of the forest because they live with it; their survival depends on it. Villagers are sometimes willing to risk everything to defend the forest against commercial logging, dams, tourist resorts or tree plantations because it's a matter of survival. The establishment of the royal forest department, with total control over forest lands, destroyed local people's sense of connection with the forest and shattered their knowledge systems."

The forest crisis in Thailand therefore is not only ecological, it is also philosophical and political. People like Dheeraprasart -- and, indeed, Zackrisson and Carrere -- are shaking the epistemological foundations of the discipline from the inside.

"I'm still puzzled why we've been so blind to this," says Zackrisson. "When I finally realised in the 1970s, I was very sad about what we'd done and what we'd lost. But we were so proud of our industry, we forgot all the other values. It's a heavy price that we've paid."