It took almost 2 decades of squinting at the microverse to finally pin down, on March 2, an accomplished atomic escape artist, the top quark 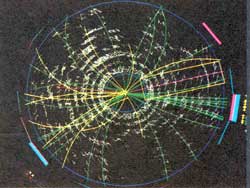 Another particle has been smoked out of the woodwork. The Eureka yell on March 2 this year that the top quark had been caught en flagrante at the Fermi National Accelerator Laboratory (Fermilab) in Batavia, Illinois, USA, was another milestone in the search for the fundamental building blocks of nature: it came almost 18 years after the bottom quark's discovery in 1977 that the 6th member of the quark family (after the up quark, the down quark, the charm quark and the strange quark).

Weeks of hectic activity and burnouts among the particle physics community preceded the announcement at a joint seminar organised by scientists associated with the Collider Detector at Fermilab (CDF) and its D0 (named after its position in the accelerator ring) detector. Premature congratulatory messages and wild rumours shot back and forth in the Internet, speculating about the mass of the particle.

Over the past 2 decades, the legendary elusiveness of the top quark had even raised doubts about whether it existed at all. Jumping the gun last year, the CDF had reported the detection of the top quark but the D0 couldn't confirm the results. Proving the existence of the top quark was necessary for validating particle physics' Standard Model -- the theoretical framework that provides an understanding of the basic forces and particles of nature -- which had postulated the particle's existence.

The top quark has turned out to be no ordinary particle. At a mass of around 180 GeV (units called electron volts (eV); 1 GeV = 1 billion electron volts, roughly the mass of a proton), it is the heaviest elementary particle known. It is about 20 times heavier than the bottom quark and more than twice as heavy as its closest competitor, a particle called the Z boson (see box The crux of matter).
Like all but 2 maverick cousins (the up quark and the down quark), the top quark is not found in ordinary matter but is created in high energy collisions of elementary particles. It lives for a fleeting a trillionth trillionth of a second before decaying into other particles like the bottom quark and bosons. What is required for "seeing" the top quark is, therefore, not only an accelerator powerful enough to produce it, but also sophisticated hardware and software to identify it by catching the properties of its decay products.

To detect the top quark, protons and antiprotons were accelerated in Fermilab's Tevatron, the world's most powerful accelerator operating at 1.8 TeV (1 TeV = 1,000 billion electron volts). Using the latest in superconducting magnet technology, these particles were made to hurtle around a tunnel of 6.3 km circumference till they built up an energy of about 1.8 TeV. The protons and antiprotons were then made to collide in the accelerator ring and the products of the collisions analysed in various detectors.

The detectors used to register the top quark -- the CDF and the D0 -- cost more than $100 million each, and are marvels of engineering and electronics. They not only detect the particles released by collisions but also measure their properties, such as mass and speed.

The huge amount of data collected is then stored on magnetic tapes, and physicists employ extremely sophisticated software to analyse the information. The task is mind-boggling -- out of the millions of collisions, the physicists have to identify a handful which involve the top quark.

The whole process, from the design of the detectors to their testing and running and the final analysis of data, is an example of the way experimental high energy physics works nowadays. An idea of the scale of the collaborative effort involved can be had from the fact that about 50 institutions from all over the world (including India) with some 450 scientists each worked on the CDF and the D0. Particle physics has come a long way since Ernest Rutherford -- the early 20th century physicist who formulated the planetary model of the atom as we know it -- and a couple of research students carried out experiments to study alpha particles in his laboratory.
The top quark is produced when the protons and antiprotons collide and produce a Z boson. The Z boson decays into the top quark and an antitop quark. These 2 are extremely short-lived particles and decay into essentially a bottom-antibottom quark pair and a boson, antiboson pair denoted as W+, W-.

These particles then decay into other particles like muons, electrons, neutrinos and other quarks. The electrons and muons are detected by the electromagnetic detectors and the muon calorimeters. The presence of neutrinos, which are neutral, is inferred by calculating the energy deficit of the products and the parent particles and presuming the difference to be carried off by the neutrinos. The quarks which are produced in the process, quickly combine with other quarks to produce a class of subatomic particles called hadrons. As opposed to the muons and electrons, hadrons are detected as jets in the detectors.

By running sophisticated computer codes, the exact number of events -- collisions that get identified and detected -- that one expects, given the accelerator and detector details, is calculated. The task is made more complicated by the fact that there is always a background radiation present that can adulterate the results. For instance, besides the muons produced by top quark decays, cosmic rays could also produce muons and the 2 should not be confused with each other. The simulation programmes developed are used to estimate these backgrounds. The whole analysis is extremely time consuming and has to be carried out meticulously.
After analysing the results, the D0 collaboration has reported 9 top quark events whereas the background expected is around 4 events. This may sound like leaving a large margin for error but actually the chances that the observed signal arose because of chance is around 1 in a million. Although the mass of the top quark has not been measured precisely, its value as inferred from the data is around 199 GeV (with an error margin of 30 GeV). This is consistent with the results from the CDF which has reported a mass of 176 GeV (with an error margin of 13 GeV). What is more, these numbers are in agreement with the mass values indirectly obtained from other accelerator experiments which have carried out precision measurements on the Standard Model.

The discovery of the top quark is a crowning achievement for particle physics and it strengthens the belief in the Standard Model as the correct theory to explain sub-microscopic phenomena. But it also raises many questions regarding physics beyond the Standard Model (see box: New horizons).

The most pressing question is regarding the existence of the Higgs particle and its properties. This particle is the cornerstone on which the whole edifice of the Standard Model of particle physics rests because it is required to give masses to the W and Z bosons as well as the quarks and leptons. An important insight would be gained into the Higgs particle by a precise determination of the mass of the top quark.

Apart from its mass, the other properties of the top quark like its charge and interaction with other particles need to be studied. There are definite predictions in the theory for these quantities and any deviation from the theoretical expectations will be a strong indication for new physics beyond the Standard Model. Theoretical particle physicists have been speculating about several scenarios which could exist if the accepted model is found to be wanting.


Supersymmetry, a theory in which every known particle is postulated to have a supersymmetric partner is an attractive alternative theoretically, though no experimental signature has been seen for it. Other more esoteric alternatives include preonic theories (which assume a deeper layer of fundamental particles called preons out of which the known elementary particles are made of) and Technicolor theories.

Though the Standard Model has been remarkably successful in explaining the nature of the sub-microscopic world as we know it, it has several unsatisfactory features. The properties of the Higgs boson, which plays such a crucial role in the theory, are not completely fixed by the Model. There is also no explanation of the family replication problem -- why is it that there are 3 families or generations of the leptons and the quarks, whose members have almost identical properties?

The first family of the quarks has 2 members, the up and the down quarks, the second family has the charm and the strange quarks while the third has the top and the bottom quarks. There are similarly 3 families of leptons with the electron, the muon and the tau particle with their associated neutrinos forming the members. Is there a deep-rooted reason for this pattern or is it arbitrary? Furthermore, do we have more undiscovered families or have we seen them all?

Interestingly, the answer to the last question is provided both by precision measurements on the Z particle and by cosmological observations. The Z boson decays give us the maximum number of families that can be accommodated in the Standard Model. Currently, the results favour only 3 families but there are some theoretical uncertainties in this.

Inversely, by accurate measurements of the helium abundance which is assumed to be produced in the primeval stage of the universe, very stringent limits can be put on the number of neutrinos allowed. This turns out to be 3 to 4 at the moment. It is an amazing aspect of the universality of physical theories that an observation on the largest scales known to us (the early universe) can provide an insight into the structure of matter at the smallest possible scale!

What after the top quark? Obviously, more data needs to be obtained to pin down the properties of the top quark. The CDF and the D0 have 1 more year to collect more data on the top quark which should provide us with the details of its mass and other properties. The next step is to look for the Higgs boson to complete the jigsaw in the Standard Model.

Unfortunately, with the cancellation of the Superconducting Super Collider (SSC) last year (Down to Earth Oct 30 1994 issue Vol No 11), the Higgs search has suffered a delay. But Fermilab is going to have a major upgrade (called the main injector) of the Tevatron towards the end of this decade which may find the Higgs. Otherwise, we will have to wait for the completion of the Large Hadron Collider at CERN, Geneva. This $3 billion multinational machine, which would be operational in about a decade, will be the workhorse of experimental particle physics well into the next century. It will look for the Higgs, signals for Supersymmetry and for new physics beyond the Standard Model.

The discovery of the top quark has provided a major boost to the sagging morale of the particle physics community which was still mourning the loss of the SSC. It has certainly brought us closer to an understanding of the way nature works at the smallest levels. Though the discovery has strengthened the belief in the Standard Model as the correct description of nature, there is no reason to think that we have the final theory as there are many unanswered questions. It is in the quest for finding the answers to these queries that physics will progress. And who knows, what nature may have in store for us as we continue to explore the fascinating world of the minuscule.

Shobhit Mahajan is from the Department of Physics & Astrophysics, University of Delhi