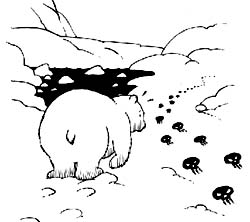 Ongoing negotiations on a legally binding instrument for international action on certain
PERSISTENT ORGANIC POLLUTANTS
Deadline for the treaty to be signed:2001
National governments have now come together to negotiate a global treaty to control and eventually eliminate pop s from the environment.

- European countries have been the major pushers for action towards a global pops treaty as their Arctic region had practically become a burial ground for pop s. Though country positions are not clear-cut at this point, eu members, particularly the Nordic countries, are keen on signing a treaty which aimed at eliminating pops altogether.

- Australia, Japan and the us strongly oppose 'elimination' as the objective of the treaty. As trade of pop s is a lucrative business, they are keen on pursuing a treaty that will control the pollutants, instead.

- They are adamant that they will not provide new funds to help developing countries implement the treaty's provisions.

- Developing countries have approached the negotiations with caution. A key consideration for them is whether the proposed treaty would compromise the contributions the chemicals industry makes to their economies.

- In many Southern countries, pops such as ddt are still the cheapest and most accessible measure to battle malaria. Therefore, they are insistent that a treaty will be possible only if their concerns are addressed and they are provided financial and technological assistance to overcome their pop s dilemma.
As the unforeseen magnitude and complexity of issues involved in the pop s treaty emerge, negotiators are faced with numerous challenges.

- Elimination or reduction? As some Northern countries, along with the chemicals industry, claim that elimination is not a realistic objective, their lobbying could change this basic provision of the treaty.

- The use of ddt for vector control is particularly a heated topic in the pops negotiations. Developing countries will need assistance to shift to existing alternatives which are considerably more expensive.

- The scope of the convention will also be influenced by its links to existing agreements, especially of environment and trade. Countries such as Australia have already pointed out that the consistency of the pop s treaty with the World Trade Organisation rules will be a key consideration.

Problem
Persistent organic pollutants (POPs), so called because they persist for long periods in the environment without breaking down, are among the most dangerous pollutants produced by human activity. A large number of POPs such as DDT are used as pesticides or industrial chemicals, while others such as dioxins and furans are byproducts of waste disposal processes like incineration. As POPs are stable, they can travel long distances through air and water from as far as the tropics, condensing as toxic rain and snow in Arctic ecosystems.

Once POPs settle on land and waterbodies, they can cause serious health damage, from neurological disorders to weakening of the immune system, among other things. There is growing evidence that single or cumulative exposures to certain POPs can disrupt the endocrine (hormone producing) system that plays a critical role in growth and reproduction.