From barefoot ragpickers to rich kabariwallahs moving about in cars, the country's waste recycling industry caters to countless Indians.An attractive business proposition that most people choose … 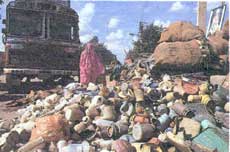 AS THE sun rises over Delhi, 16-year-old Radha slings a gunny sack over her shoulder and ambles off to work. Her destination is the back-lanes of Bahadur Shah Zafar Marg, where she and her friends rummage through roadside trash and rubbish dumps for tangled wire, cardboard, bottle caps, dry pens, toothless combs, fused bulbs and anything else that can feed the huge Indian recycling industry, the biggest in the world, and thus earn them a living. Radha and her friends are not workers of the Delhi municipality; they are, however, its unsung saviours.

The Municipal Corporation of Delhi (MCD) has 3-4 garbage bins - usually overflowing with waste - in each of the citys 500 authorised residential colonies. The corportion periodically activates its laggardly trucks to collect the waste over its vast jurisdiction, spending about Rs 70 crore a year (see box: Running out of options). Running parallel to the MCD'S waste (mis)management system is the teeming unorganised sector that comprises ragpickers, local kabaris, intermediaries, recycling factories and affluent businessmen. It is a multicrore business. This informal waste collection and disposal sector work starts from, literally, scratch. While domestic garbage is dumped into the municipal bins, the burgeoning uncivic litter on the roads remains unattended to by the municipality. Without Radha and her ragtag bunch, the city would be a foot under garbage every day.

Small workshops and shops take especial pleasure in dumping their waste in back-lanes rather than forwarding it to municipal bins. Adding to the mess are the unauthorised settlements that have mushroomed all over the capital, and which the MCD's network does not cover. These are the areas that the informal sector taps to make its money.

Ragpickers sell their collected waste to the kabariwallah who is often stationed close to the back-lanes. On an average, a ragpicker earns about Rs 40-50 a day. There are about 75,000 ragpickers in Delhi rounding up a monthly revenue of Rs 9 lakh.

The kabariwallah is the first of the several intermediaries in the trade, who usually own a few shacks that double as godowns for junk. Take Shankar: he operates from a back-lane near the Income Tax Office. He deals mainly in plastic and glass bottles. He buys plastic at the rate of Rs 2 per kg to Rs 16 per kg, depending on the quality. Plastics from homes - dibba-balti in trade parlance - are usually high-grade and, at Rs 16 per kg, fetch the most. This high-density plastic is recycled into buckets, grocery containers, jerrycans and oil canisters.

The cycle-borne kabariwallah, equipped with a weighing scale, scours residential colonies and buys old newspapers, magazines, plastic and glass bottles - anything, in fact, that can be classified as household junk. Old newspapers and magazines used to constitute an important part of the trade of the kabariwallahs. But with the gradual popularity of plastic bags, the bottom of the newspaper-and-envelope industry has been developing cracks for some time now, with frequently fluctuating prices of old newspapers. Even then, a persevering kabariwallah manages to earn around Rs 1,500 a month. The kabariwallah-on-wheels also sells his wares to the intermediary whom a bottomfhe-barrel ragpicker goes to.

The first level of intermediaries is also the quality control and classification unit. The broad categories of waste are: plastic, paper, textiles, glass, iron and aluminium. And each category supervises several subategories.