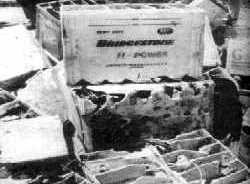 even as the fourth Conference of Parties ( cop iv ) is about to meet in Kuala Lumpur from October 6 to 10 to decide whether a ban on trade in recyclable wastes under the Basel Convention should be implemented, the Indian government knows that it cannot win. If it agrees to the ban, the fertiliser and non-ferrous metals industry in India will be hit hard. And if it decides to go its own way, unheralded waste imports could add to the already large loads of toxic waste in the country.

The convention, first signed by 34 countries in March 1989, was a result of years of negotiations between representatives of 115 countries. India became a signatory to it in March 1990 and ratified it in June. When the Basel Convention (Basel ban) was signed on March 25, 1994, in all 65 parties - including India - agreed to ban all exports of hazardous wastes from Organi-sation of Economic Cooperation and Development ( oecd ) to non- oecd countries by the year 1998. This included recyclable wastes that were considered, and defined, as hazardous.

Developed under the auspices of the United Nations Environment Programme ( unep ), the convention is a legally binding instrument to control the transboundary movement and disposal of hazardous wastes.

The secretariat of the Basel Convention estimates that almost 400 million tonnes of hazardous wastes is annually generated worldwide. A lot of this finds its way into the deve-loping world - where it is either dumped or recycled - as environmental norms in such nations are milder than those in the developed world. According to the World Bank, India generates five million tonnes of hazardous waste annually.

In simple terms, cop iv will decide what wastes - hazardous, recyclable, or otherwise - are to be permitted for international trade. Could this restriction affect the Indian non-ferrous metal industry? Also, does the clause 'trade by bilateral agreement' mean that imports of recyclable wastes will carry on as before? One question for which there are no apparent answers is: Does India need to import metal-bearing wastes? Cannot reusable wastes generated by Indian industry fulfil this requirement? Most importantly, will the Indian delegation to cop iv agree to the recommendations of the Technical Working Group ( twg )?

"The Conference of Parties is a four-day affair and we have time to deliberate over our stand," says Vijai Sharma, joint secretary at the ministry of environment and forests ( mef ), who will represent India at the meeting. "After the cop has adopted the recommendations of the twg , then the question of a decision arises," says Sharma.

The mef refuses to divulge what the Indian stance at Kuala Lumpur would be. It merely says that hazardous wastes would not be allowed into the country.

"India's policy as regards the Basel Convention has been consistent," says minister of state for environment Saifuddin Soz, denying that there was a change of heart in 1995. India, which had taken the lead to call for a ban on trade in hazardous waste, did a volte-face in 1995 when it tried to convince other signatories that trade in recyclable wastes should be permitted.

Environmental organisations such as Greenpeace are of the view that this is a result of the pressure exerted by industrialised nations such as the us and Australia, whose waste generating industry stands to lose.

Firstly, sorting out waste disposal is an expensive proposition in those countries. It almost always involves obtaining the consent of a sensitised community. Secondly, this would force industry in the developed world to invest in cleaner production techniques thereby adding to costs. Greenpeace contends that forcing industry to go in for cleaner technologies would, to an extent, do away with this dangerous by-product.

Meanwhile, the twg of the Basel Convention would evolve a list of recyclable wastes that can be permitted for trade and those that would be banned. The twg is to come up with a final version of lists a , b, and c at cop iv . List a items will be completely banned. They include lead wastes, used batteries, and lead dross (dross is a type of waste). List b items will be permitted for trade, provided they do not show characteristics of Annexure iii (which classifies wastes that would be hazardous, and thus be banned). List c would address items that are under consideration and can fall in either of the two lists mentioned above.

So far in the 12 meetings of the twg , more than 54 categories of wastes, including lead waste batteries, lead ash and scrap, have been recommended that will fall under the ban.


In April, 1997, the Delhi High Court passed an order in which the import of zinc and lead wastes (such as ash and skimming) had been restrained in the interim till the next hearing. In another case, the sc ruled that from May 5, 1997, "no authorisation / permission would be given by any authority for the import, which have already been banned by the Central government or by any order made by any court or any other authority".

The Court made it clear that it would not tolerate import of wastes banned under the Basel Convention. It also issued show cause notices to states, asking why units handling hazardous wastes without proper disposal facilities should not be shut down. Earlier, a temporary ban on hazardous wastes in April 1996 by the Delhi High Court, had also had an effect on industry.

Industry sources contend that India should be allowed to carry on imports of any nature without international 'inter-ference'. Secondary sources (which are from metals, wastes, and scrap) of non-ferrous metals - such as lead and zinc - have a fair contribution to non-ferrous metal supplies in the country, as well as the fertiliser industry, where zinc is an important input.

"As the Basel Convention had not specifically spelt out the items that were hazardous wastes, the trade in recyclable wastes need not be stopped. And since India has ratified the convention, trade according to the specifications of the convention must be allowed," argues S Kanunga of the All India Secondary Zinc Manufacturers' Association.

The All India Importers' Association ( aiia ) is of the view that by ratifying the ban, India only stands to lose. "After 1998, oecd countries would be able to freely trade between themselves and non- oecd countries would lose out on this trade," says an aiia spokesperson. This claim rings false as wastes are nothing but an undesired burden in industrialised countries.

Meanwhile, under orders from the sc , the mef has set up a committee headed by R A Mashelkar, director-general of the Council for Scientific and Industrial Research. The mandate of this committee is to advise the courts on technical matters. This decision has, however, added to the confusion that surrounds the issue. For example, what does the government do if the re-commendations of this committee clash with that of the twg ?