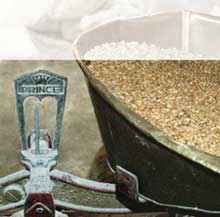 Wheat industry watchers have been perplexed ever since Union agriculture minister Sharad Pawar decided to start importing wheat early this year despite the fact that stocks were still over the buffer level and procurement was to begin in April. A Down To Earth investigation points to the involvement of the us.

In July 2005, when India's wheat procurement season was over, we had a stock of 14.7 million tonnes (mt), just 0.4 mt above the buffer stock requirement. This was far less than the 5 mt of excess stock the country had in July 2004. The sharp decline was despite the fact that wheat production remained unchanged at 72 mt between 2003-2004 and 2004-2005. Privatisation of procurement had led to a fall in state procurement. Still, there was no call to hit the panic button and imports were not, at least for public consumption, even a remote option.

Nevertheless, as early as on April 17, 2005, the onset of the procurement season, Hardip Singh, president of Cargill India, made the astonishing claim that India would soon begin importing wheat. Not long after, in July 2005, the us Department of Agriculture (usda) released a previously classified report that was even more specific in its prediction than Singh. The report ('World Agricultural Supply and Demand Estimates') said: "Projected global imports are up 1.75 million tonnes with the most noteworthy changes being a 1 million increase in India's imports (the first in 6 years).

Between July 2005 and December 2005, Pawar had consistently denied rumours that there was a plan to import. But in February 2006, out of the blue, he suddenly decided to import 500,000 tonnes of wheat. Pawar ordered another consignment of 1.5 mt on March 30, 2006, saying, "There is no shortage but I have to build stocks." This was not the only curious part of the story. Around the time the usda report was being readied for release, prime minister Manmohan Singh was in Washington finalising, among other things, the "knowledge initiative" deal, which envisaged increased grain imports from the us.

The contracting process and a related deal are even more curious. The Food Corporation of India's decision to sell 800,000 tonnes of wheat futures it had bought in September 2005 for January 2006 delivery on the Chicago Board of Trade baffles trade-watchers. "If India hadn't sold this in November 2005, it could have saved at least us $60 per tonne today," says Sanjay Agarwal, a commodity analyst.

Moreover, by signalling desperation by waiving duty, Pawar ended up importing at premium prices much higher than the global market price. In the tender floated by the State Trading Corporation (stc), an Australian monopoly grain marketing body, the Australian Wheat Board, quoted a price of us $179 a tonne, which ultimately won. This meant an astonishing premium of around us $40. A senior official in stc justified this, saying, "This means around Rs 810 per 100 kg, which is less than the market price in south India (more than Rs 900). We have to pay so much more because the cartel of global exporters filed very high tenders." But the fact is that regular importers of wheat, like Japan, pay only us $1 to us $2 as premium per tonne.

Though the Australian company has won, the us is sure to make an aggressive pitch sooner rather than later. Mark Samson, vice-president, us Wheat Associates, a trade body, says India must enter into a long-term contract with us to get a better price. Samson also asked for easing quarantine norms on exotic weeds in shipments to ease the passage for a future deal.

But India should look to China's example and tread with caution. China produced 123 mt of wheat in 1997. This dropped to 90 mt in 2004, turning the country from being self-sufficient to one of the world's largest importer with a demand of 8-10 mt per year, between 2002 and 2004. The reason was a decline in acreage from 30 million hectares (mha) to 22 mha between 1997 and 2004. This was partly a result of China opening agricultural procurement to private merchants and abolishing its compulsory grain delivery scheme in the mid-1990s. Private retailers offered lucrative buyback offers on high-value horticultural crops diverting land away from wheat. The us has entered into long-term contracts with China to provide wheat at affordable prices.

If this happens in India, it could wipe out the livelihoods of many farmers -- especially marginal ones and agricultural labourers -- apart from putting the country's food security into foreign hands.