Disaster management chaos leaves Orissa as vulnerable as before 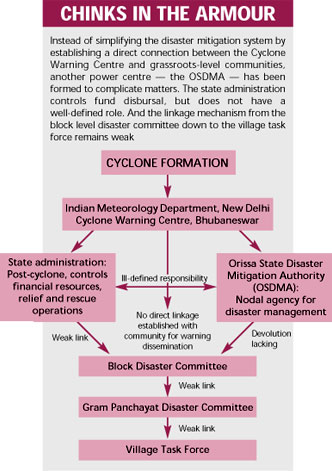 Ever since 1999, anxiety clouds the faces of coastal Orissa's local inhabitants as October and November draw near. Around this time that year, the region was struck by the super cyclone that claimed nearly 30,000 lives. It is a sad reflection on the state of disaster preparedness that three years down the line, residents still knit their brows in consternation during the two most cyclone-prone months.

The fear persists because the much-hyped Community-based Disaster Preparedness Programme (cbdp) -- funded by the United Nations Development Programme and Department for International Development -- is in disarray. What started out as an effort to involve local people in the crisis response mechanism, is petering out due to lack of political will and bureaucratic sloth.

cbdp operates through disaster committees constituted at the block, gram panchayat and village levels. They are entrusted with the responsibility of disaster planning. This includes risk assessment, resource inventory such as food supply and route clearing equipment, warning interpretation and dissemination, apart from other measures.

While the Orissa State Disaster Mitigation Authority (osdma) -- formed immediately after the super cyclone -- functions as the nodal agency, it in turn utilises the services of other local-level organisations for implementing cbdp. Ironically, the programme is currently confined to only 10 blocks out of the 128 affected by the cyclone. "There are definite plans to spread out, but it will take at least four to five years to reach the entire state," says osdma managing director Arbinda Behera. Does this mean that nine million residents in nine affected districts will have to bear the brunt of another cyclone before the state's defences are shored up?

It is felt that cbdp has proved to be a damp squib because indigenous communities have been kept out of the planning process (see flow diagram: Chinks in the armour). The implementing agencies are said to be imposing measures which are divorced from reality. Sanjay Khatua, a disaster management consultant based in Bhubaneswar, says: "So far, funding bodies and communities from outside have had a greater say in formulating plans rendering them unworkable." For instance, emphasis is not being laid on traditional methods such as training swimmers and maintaining grain banks despite these steps having worked in the past. "The programme is bound to fail as it is not practical in its content," feels Sameer Pradhan, a native of Ersama.

In yet another knee-jerk reaction, several funding agencies had started building cyclone shelters (estimates vary from 50 to 100) after the cyclone. But it remains unclear who will be responsible for their upkeep. Ideally, the village-level task forces should be put in charge of maintenance. Devolution of power has, however, not taken place.

The non-existent horizontal coordination between various village task forces is a cause for concern. This, in conjunction with the presence of too many players, has compounded the confusion. Sunder Narayan Mishra, programme coordinator, Council for Youth and Social Development, a non-governmental organisation involved in implementation activities, avers: "Collaboration needs to be carried out on a much wider scale." In this regard, not weaving the state administration -- the financing arm -- into the system can prove to be a major bottleneck during a crisis.

The failure of the satellite-based warning service has been stated as the reason for the large number of deaths caused by the super cyclone. Despite this, the communities have not been linked to the Indian Meteorology Department's Bhubaneswar-based Cyclone Warning Centre so far. Clearly lessons have not been learnt from the past, leading those residing in the vulnerable areas to prognosticate that a sequel to the super cyclone would take an equally heavy toll.