White foam: The Chennai riverbed does not have space to breathe 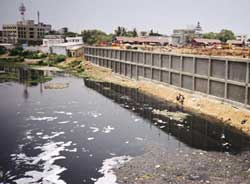 If the December floods in Chennai were a wakeup call, the hasty drive to clear encroachments is proof that its lessons haven't been learnt. The Cooum and Adyar rivers flooded their banks and entered nearby residential areas -- and not just the Housing Board Colony at Kotturpuram, which gets flooded annually. The government has blamed concrete structures built in the rivers' floodplains. This has drastically narrowed the rivers to half their width.

In fact, the flood-encroachment-removal cycle has a history. The same things happened during the cyclonic floods of 1943, 1976 and 1985. In 1976, Adayar, Kosathalayar and Cooum caused heavy flooding of several low-lying areas, and breaches in the bank resulted in heavy damages to the Housing Board Colony. In November 1985, a rainfall of 727 mm in a span of three days led to floods.

The state government had set up a task force in 1985 to suggest remedial measures. The same year, an expert committee was set up to recommend flood mitigation measures, and the Chennai Metropolitan Development Authority (cmda) appointed a foreign firm to prepare the Chennai Metro Flood Relief/Storm Water Drainage Master Plan for the city. After conducting simulation model studies, the firm has submitted its report. Its main recommendation is removal of encroachments.

Encroachments and obstructions to the waterways are indeed the main causes for floods in the city, and clearing the encroachments will no doubt provide relief. The level of encroachment has increased manifold between 1985 and 2005. Arual of the ngo Pasumain Thayagam, which works on protecting urban waterbodies, says, "Before 1985, it was small huts on the banks of the river. Now, many private institutions and apartments have sprung on the riverbanks." He says it is unjust to only blame poor slum dwellers and relocate them 30 km from the city.

And this is only one part of the story. The real reason for the floods lies elsewhere. It is in the mismanagement of Chennai's river basin, says S V Sivaraman, retired engineer of the public works department's (pwd's) groundwater division. The Chennai river basin includes Araniyar, Kosathalayar, Cooum and Adayar rivers. A study by S V Sivaraman and S Thillai Govindarajan, retired engineers of the pwd, says of the existing 1,519 waterbodies in the Chennai basin, 25 per cent to 35 per cent are encroached. Most waterbodies along the city's periphery, like the Pallikaranai swamp and the Kodigaiyur lake, have been converted into garbage dumps. This leads to flooding of residential areas. The Tamil Nadu Slum Clearance Board, which converted the waterbodies to residential areas, is also to blame (see 'Emergency', Down To Earth, December 31, 2004).

Chennai's river basin comprises 7,282 sq km. Of this, 5,542 sq km is in Tamil Nadu and the remaining in Andhra Pradesh. The Chennai basin is a complex fabric that includes the rivers Araniar, Korathalayar, Cooum and Adyar, which mostly flow eastwards. During the December 2005 floods, 18,000 cusecs of water was released suddenly from the Pitchatur lake, aggravating the crisis. Managing the river basin needs an integrated approach, which is clearly absent.

In fact, the government itself is an encroacher. Sivaraman says the construction of mass rapid transport systems on the Cooum and the Buckingham Canal has affected the river's flow. Stations have been built on the Cooum and the canal's silting has made the area more flood-prone. Over the years, the government has built tenements in such areas. For instance, officials concede that the State Housing Board has built colonies on sites that were once part of Velachery and Mogappair lakes. Here, too, the reason's the same -- government wants to cut expenses on purchasing land.

Experts are unequivocal: instead of thinking of short-term measures like removing hutments, the government should focus on the management of the river basin.

Lakes need to be desilted and cultivation of water spread areas of waterbodies needs to be stopped. The waterbodies of the entire basin need rejuvenation. This would not only flood-proof the city, it would also go a long way in solving Chennai's never-ending saga of water scarcity.