"Big data can be used to counter corporate or state propaganda"

Jean Dreze on why he prefers a solidarity society, rather than a welfare state 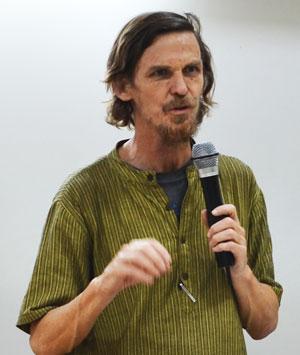 Are you actually an advocate of the welfare state?

Ideally, I would prefer to think in terms of a solidarity society rather than welfare state, for two reasons. First, private non-profit institutions can play a very useful role in the social sector. In many countries, some of the best schools and health centres are run by civic associations, trade unions, churches, non-profits and so on. Many interesting community-based institutions of solidarity can also be found in relatively egalitarian societies, such as the tribal societies of central India. State provision, of course, is paramount in India today, but that may change.

Second, welfare has the connotation of charity towards a minority of poor people, whereas solidarity conveys that a large part of the population has a stake in institutions of mutual support. Universal health care is a prime example. Free markets are so ineffective in the field of healthcare that almost everyone has a stake in the healthcare system being planned and managed for the public good, rather than for private profit. Further, even those who are not exposed to illness may wish to live in a society where everyone is taken care of in times of need.

Why do you think there is a greater acceptance of experience as evident in disciplines such as psychology and medicine than in social policy and economics?

I am not sure about the validity of this dichotomy. Experience has played an important role in all these fields. To cite the example of universal healthcare, the National Health Service in the UK owes its existence to Aneurin Bevan, a former coal miner who had seen some of his siblings die for lack of healthcare. Had he been informed by health statistics alone when he became health minister, it is unlikely that he would have acted with the same clarity of purpose. And just as experience has played a big role in the history of social policy, it has been important in economics too. Economist George Akerlof wrote his seminal paper on adverse selection, called “The Market for Lemons”, after a visit to India where he observed the problem in real life. Similarly, it is doubtful that British economist Maynard Keynes would have been able to develop his revolutionary macroeonomic theories without the benefit of his vast hands-on experience of economic matters. The recent surge of interest in evidence-based policy, as it is called, does not detract from the value of experience as a guide to economic policy or even theory.

You believe that better development performance of states like Tamil Nadu and Himachal Pradesh might have something to do with the active roles women play in these states. If that's true, what gives you confidence that laggard states in which this isn't true will eventually catch up?

The extreme nature of gender inequality in the laggard states, particularly in north India, makes it difficult for them to emulate the more progressive states. Your question, however, assumes that gender relations in north India will remain much the same in the foreseeable future. I see no reason why this should be the case. On the contrary, I see the expansion of women’s freedoms in north India as a powerful source of social change—not just for women but for the entire society. It seems to me that all this is waiting to change.

With respect to Ambedkar's political project of annihilating caste, which exacerbates social inequalities, do you think modernisation, which renders caste anonymous by shuffling demographics, is, as Ambedkar himself believed, a possible way out?

Ambedkar certainly believed that some aspects of modernisation, such as mass education, might help to annihilate caste. But he did not count on that alone. His boldest attempt to undermine the caste system, mass conversion to Buddhism, had little to do with modernization. He also looked to other means of emancipation for Dalits, such as capturing political power. Likewise, I believe that leaving the annihilation of caste to the normal course of modernisation would be very complacent. It could take centuries.

Do you believe Big Data can enrich action-oriented research methods assuming it is not used as an instrument of mass surveillance?

I believe that most technological advances can be put to constructive use, in principle, just as they can be put at the service of power and profit. In the case of big data, the latter seems more likely, since big data tend to be owned or controlled by big corporations or governments. But that does not preclude some constructive applications, to the extent that big data is accessible to public-spirited individuals or organisations. Some Wikileaks revelations, for instance, can be thought of as applications of big-data analysis. Big data, I suppose, could also be used to counter corporate or state propaganda, which is an important form of action-oriented research.

Do you think the work of Richard Thaler, this year's winner of the Nobel Prize for economics, which undermines the long and widely-held shibboleth that we are all self-interested rational agents, throws any light on the role of solidarity in social life?

Behavioural economics is indeed an important departure from the rational self-interest paradigm that has dominated economics for a long time, and still does. But the main departure is from rationality, or at least a certain understanding of it, rather than from self-interest. The discipline rightly points out that people are not always clear about their self-interest or able to pursue it, due to, for instance, confused thinking, lack of will-power and so on. This helps to understand, say, why you may wish to place your alarm clock at the other end of the room rather than within reach of your bed.

It is only in specific branches of behavioural economics, notably the literature on so-called social preferences, that serious attention is paid to non-selfish motives such as altruism, solidarity and public-spiritedness. The question remains whether other-regarding behaviour is best seen as a matter of “preferences”. If you spend every Sunday morning teaching slum children, it is not particularly enlightening to say that you do it because that is what you prefer to do.

In all your writings, curiously, there is a glaring lack of reflection on the vexed relationship between the economy and the environment.

I beg to differ, at least to some extent. For one thing, I have written from time to time on environmental issues or at least environment-related issues, for instance green taxes, forest rights, forced displacement and nuclear weapons. For another, many of the broad ideas I have been concerned with have a bearing on the environment. To illustrate, environmental protection is a prime example of the critical role of public action in development, one of the recurring themes of my writings with Amartya Sen from 1989 onwards. Similarly, the last chapter of the book is about the value of public-spiritedness, well illustrated by individual and collective efforts to safeguard the environment. The critique of corporate power, again, applies in particular to profit-driven environmental plunder. Having said this, I plead guilty of not addressing environmental issues more explicitly. When I was a student, the environment was still a massive blind spot in development economics, and I guess I have not made enough effort to educate myself on this later on.